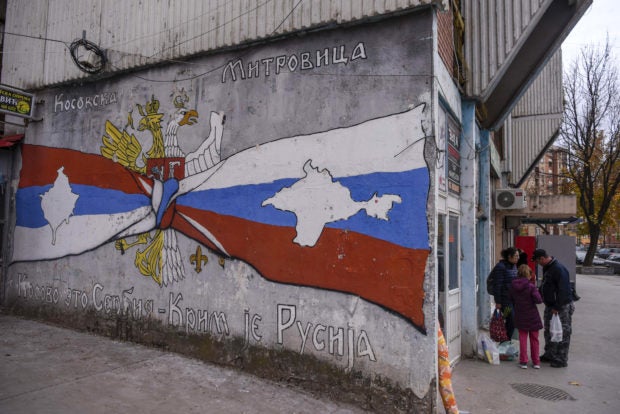 Kosovo Serbs stand next to a mural reading “Kosovo is Serbia and Crimea is Russia” in the Serb majority north of Mitrovica, on November 9, 2021. AFP FILE PHOTO

PRISTINA — Kosovo’s interior minister said on Saturday it has arrested a Russian journalist at the border on suspicion that she could be a spy, and security authorities were searching “for her intentions.”

“Many countries have proven that she was engaged in espionage for Russian military intelligence and that she pretended to be a journalist,” Svecla said in press statement.

Reuters could not verify Svecla’s accusations. The journalist was not available for comment and it was unclear if she had hired a lawyer.

Svecla published on his Facebook page some photos of the journalist with Russian Foreign Minister Sergey Lavrov and another one with Syrian President Bashar al-Assad among other images.

Russia is Serbia’s main ally and just like Belgrade is against Kosovo’s independence.

Tensions between western Balkan neighbours Kosovo and Serbia have flared recently and came to a head last week after Kosovo said it would oblige Serbs living in the north of the country and using Serbian car licence plates to apply for plates issued by Pristina institutions. The obligation has now been postponed.

Ethnic Serbs make up around 5 percent of the Kosovan population, which is 90 percent ethnic Albanian.

In another incident police said on Saturday that one of their patrols close to the Serbian border came under in an area of the country marred by ethnic disputes and smuggling activities.

“Her attempt to enter our country, coinciding with the developments in the north of the country, clearly proves the Russia has joined Serbia’s propaganda with the aim to destabilize our country,” he said.

Kosovo has joined European Union and the United States condemnations against Russia’s invasion of Ukraine and has already introduce sanctions.