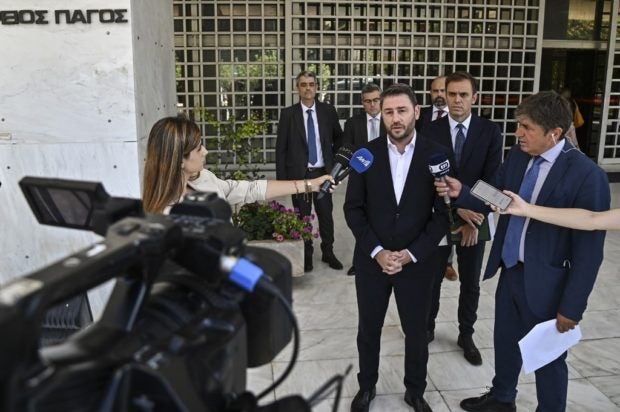 In this photograph taken on July 26, 2022 Nikos Androulakis, a member of European Parliament and president of the Movement for Change (Pasok-Kinal) party, talks to media after filing a complaint at the Supreme Court in Athens over attempted spying on his mobile phone with Predator malware. (Photo by Eurokinissi / AFP)

Athens, Greece — Greece’s intelligence chief has resigned, the government said on Friday amid a scandal over alleged spying of an opposition politician.

Panagiotis Kontoleon “has presented his resignation… which was accepted,” the office of Prime Minister Kyriakos Mitsotakis said in a statement.

The announcements came a week after the leader of the country’s Socialist opposition party filed a complaint with the supreme court over “attempted” spying on his mobile phone with Predator malware.

“A few days ago I was informed by the European Parliament that there was an attempt to bug my mobile phone with Predator surveillance software,” Nikos Androulakis told the media as he left the courthouse in Athens on July 26.

Two Greek journalists have also taken legal action this year after they claimed to be victims of surveillance.

The government has consistently denied any state involvement, but the rows have sparked an outcry in the country.

Investigative websites Reporters United and Inside Story have accused Dimitriadis — a nephew of Mitsotakis — of being linked to the alleged spying scandals involving Androulakis and Greek financial journalist Thanasis Koukakis.

The European Parliament set up a special service for MEPs to check their phones for illegal surveillance software following hacks using a spyware similar to Predator called Pegasus.

The software can infiltrate mobile phones to extract data or activate a camera or microphone to spy on their owners.

Androulakis used the service for “a precautionary check of his phone on June 28, 2022” and “from the first check, a suspicious link related to the Predator surveillance tool was detected,” his PASOK party said in a statement.

The intelligence chief of Greece’s fellow EU member Spain was sacked earlier this year after it emerged that top politicians — including Prime Minister Pedro Sanchez and Catalan separatists — were targeted by phone hacking.

AFP: Measures in place vs China spying via telco

Dito allays fears of Chinese spying: ‘We are a Filipino company’