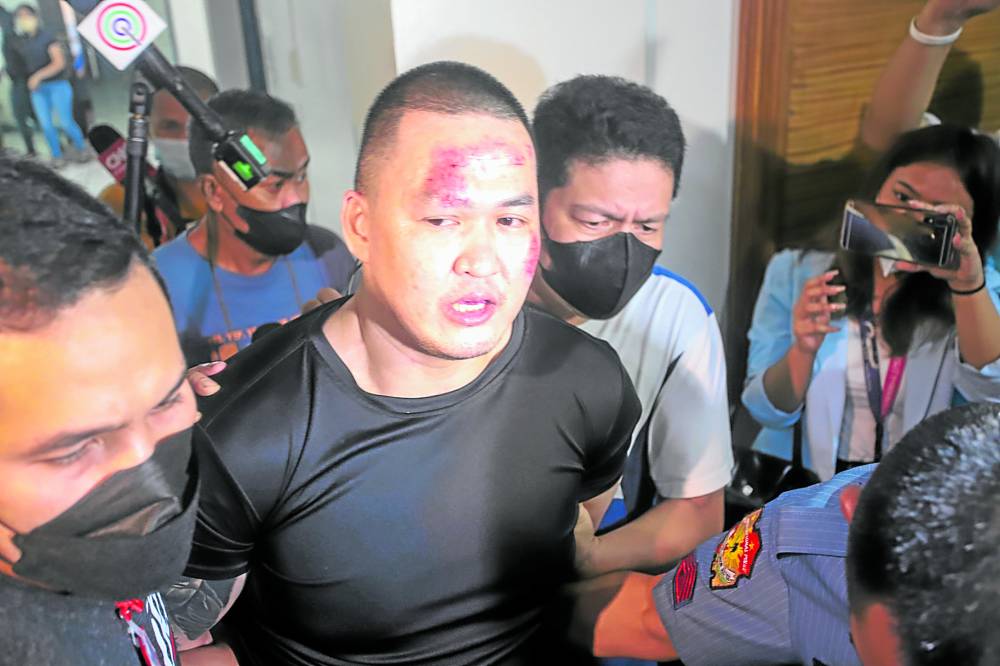 The lawyers of Chao Tiao Yumol, the confessed gunman in the killing of former Lamitan City Mayor Rosita Furigay and two others at Ateneo de Manila University last month, appear to be setting the stage for an insanity defense, prompting a Quezon City judge on Thursday to move his court dates until a medical examination was done on him.

Yumol was supposed to be arraigned on murder charges on Thursday, but his lawyer moved to suspend the proceedings as the suspect was supposedly exhibiting signs of mental unsoundness and needed to be “medically examined.”

“They are putting up a defense of insanity,” said lawyer Quirino Esguerra, who represents the Furigay family.

According to Esguerra, Quezon City Regional Trial Court Branch 98 Judge Maria Cristina Rosario-Osoteo ordered that Yumol be tested by experts in national mental health institutions. She also postponed the scheduled hearings, including the arraignment and pretrial conference, to the morning of Sept. 16.

Yumol, a medical doctor who gained a social media following for his proadministration posts, was indicted for murder on three counts and for frustrated murder after he allegedly gunned down Furigay, who was attending her daughter’s graduation from law school, her aide Victor Capistrano, and Ateneo security guard Jeneven Bandiala, on July 24.

Hannah Rose Marian Furigay, the former mayor’s daughter, was wounded during the shooting, along with Julia Manabat, another parent attending the graduation rites on the Ateneo campus in Quezon City.

Speaking to reporters after Thursday’s hearing, Esguerra said the opposing camp “did not elaborate what those symptoms are.”

“We consider that as a matter of defense. We will be asking the court on Sept. 16 to proceed with the arraignment, pretrial and trial proper,” he added.

Under Article 12 of the Revised Penal Code, an “imbecile or an insane person” is exempt from criminal liability “unless the latter has acted during a lucid interval.”

“When the imbecile or an insane person has committed an act which the law defines as a felony, the court shall order his confinement in one of the hospitals or asylums established for persons thus afflicted, which he shall not be permitted to leave without first obtaining the permission of the same court,” according to the law.

Esguerra said he and the Furigay family were surprised by the Yumol camp’s strategy, noting that on Tuesday, he pleaded not guilty to separate charges of malicious mischief and illegal possession of a firearm before the Quezon City Metropolitan Trial Court Branch 133.

“The [Furigay] family, again, was practically dismayed [by Yumol] putting up this defense of insanity,” he said.

But Esguerra added that his side was prepared to respect the process once Yumol had been examined, adding that: “We are ready. Even now, we are ready for the arraignment, for the pretrial and we are ready to prosecute him to the fullest.”

Yumol was an ardent supporter of President Marcos and former President Rodrigo Duterte, particularly the latter’s bloody war on illegal drugs. Upon his arrest, he had told the media that his actions stemmed from unproven accusations on the Furigays being “drug lords” in Lamitan, a city in Basilan province.

In Lamitan City, Presidential Peace Adviser Carlito Galvez Jr. called for sobriety amid palpable tensions between the Yumol and Furigay families and their supporters.

“Reconciliation, healing, and eventually forgiveness are needed to end violence in Lamitan City. I call for sobriety among the parties concerned, and residents in the city,” the official said in a statement.

Galvez warned that if left unaddressed, the situation could “escalate and negate the gains of peace we have achieved in Basilan.”

“This is something we would like to avoid at all costs,” he added. Amid cries for justice, Furigay was laid to rest on Wednesday in funeral rites that began at 6 a.m. and ended at 1 p.m. with thousands of mourners sending her off. Her remains were flown in from Manila on Sunday.

Five days before the burial, the suspect’s father Rolando Yumol was gunned down outside the family compound in Barangay Maligaya, raising tensions between the two families.Police, however, have not established any link between the Ateneo shooting and the killing of the elder Yumol. The Furigay family has also strongly denied any involvement in the attack on the elder Yumol.

There is a need to “break the cycle of violence,” said Galvez, who used to command an Army battalion in Basilan.

“I witnessed how the former mayor spearheaded peace and development efforts in the province. The best way to honor her memory is to sustain the initiatives she has started,” he said.

Furigay was the city’s first and only woman mayor who ended three terms in office on June 30.