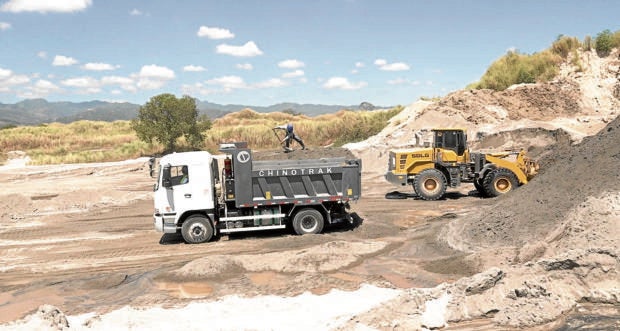 MONEY FROM SAND Sand belched out by Mt. Pinatubo in its 1991 eruption created a multibillion-peso quarry industry in Pampanga province. —PHOTO BY PAMPANGA PROVINCIAL INFORMATION OFFICE

CITY OF SAN FERNANDO — Pampanga Gov. Dennis Pineda suspended the quarry operations in the province for 15 days starting Tuesday to give truckers time to comply with the law against overloading.

The suspension would cost the province at least P30 million in potential revenues, according to Romeo Dungca, head of the local quarry regulatory unit, Kalam.

Since Pineda assumed office in July 2019, Pampanga has earned P2.119 billion from the P150 sand tax, P250 administrative fee, charges, fines and penalties generated from the quarry industry thriving on the sand and gravel that Mt. Pinatubo spewed in 1991.

The P150 sand tax is distributed at a 40-30-30-percent sharing among barangays, towns or cities, and provinces, according to provisions of the Local Government Code of 1991.

Pineda said the 15-day period would give truck owners and hauling companies the time to cut the sidings of their vehicles based on the gross weights allowed by the antioverloading law, or Republic Act No. 8794. The provincial government has accredited 7,000 trucks to ply around Pampanga.

“We need to preserve our roads against overloaded vehicles. Public funds will go to waste if we keep repairing instead of maintaining and preventing damage,” the governor said after meeting with officials of the Department of Public Works and Highways (DPWH), North Luzon Expressway (NLEx) Corp. and several other agencies on Tuesday.

Leaders of five quarry associations and trucking companies welcomed the governor’s order, saying it was “for the common good.”

The DPWH agreed with the 33-ton weight limit and rerouting plan that NLEx Corp. enforced on NLEx’s Candaba Viaduct, which required additional rehabilitation following “severe” damage it incurred after repairs in 2018.Pineda said he was not opposing the weight limit and rerouting scheme of NLEx Corp. He appealed to haulers passing through Pampanga roads to comply with allowable weights.

He had asked the DPWH to form a team from various agencies to help the provincial government in accrediting trucks transporting Mt. Pinatubo’s sand and rocks from within the province.

Quarry income helped Pampanga become the third best performing province for having the highest locally sourced income and fifth in collection efficiency in the 2021 ranking by the Bureau of Local Government Finance. —TONETTE OREJAS

Read Next
Ex-Puerto Rican governor arrested for accepting political favors
EDITORS' PICK
Percy Lapid’s kin: ‘We demand that his cowardly assassins be brought to justice’
Nothing’s certain so here’s how everyday Filipinos can make the most out of their Plan B
Do all the things you do, faster
PNP vows to bring justice for slain Percy Lapid; says probe underway
House energy committee chair Arroyo bats for cheap electricity
‘Seniority’ requirement despite vacant posts in DOH bothers senators
MOST READ
Student stabs teacher dead in Samar town
Trixie Angeles quits as press secretary due to health reasons
Not rehired?: Trixie Angeles not on list of reappointed Cabinet execs
Final net satisfaction rating slightly decreases for Robredo, Sotto — SWS
Don't miss out on the latest news and information.