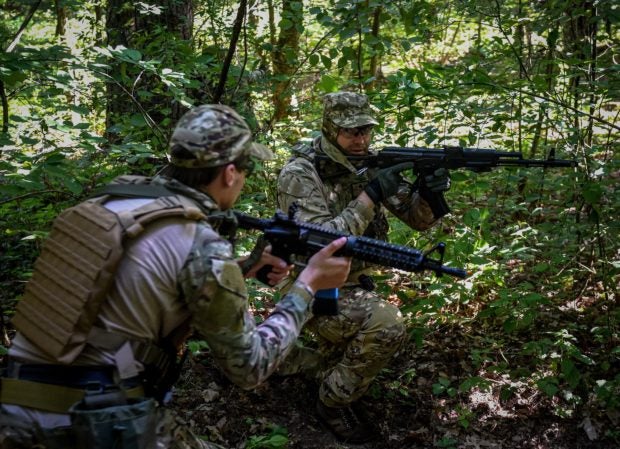 A cargo ship carrying the first delivery of grain from Ukraine since Russia’s February 24 invasion sets sail from Istanbul after getting clearance from a Russian and Ukrainian team of inspectors to sail on to its final destination in Lebanon.

The Sierra Leone-flagged Razoni left the port of Odessa on Monday following a deal brokered by Turkey and the United Nations on lifting a Russian naval blockade of Ukraine’s Black Sea cities.

Wednesday’s inspection was being watched closely for signs of how well the agreement holds up.

Ukraine is one of the world’s main grain suppliers and the blockade had sent food prices soaring.

Ukraine says its forces have retaken seven more villages in the southern Kherson region in a major counteroffensive.

Moscow seized almost all the territory of the economically and strategically important region bordering the annexed Crimea peninsula during the first days of its invasion.

But in recent weeks, the Ukrainian army, bolstered by deliveries of Western-supplied long-range artillery, have regained ground.

German Chancellor Olaf Scholz accuses Russia of blocking the delivery of a turbine needed to keep gas flowing to Europe through the Nord Stream pipeline.

Standing next to the turbine, currently stuck with maker Siemens Energy in Germany, Scholz said the unit was “available and working”.

Russian energy giant Gazprom has blamed the delayed return of the unit from Canada, where it was being serviced, for the initial reduction in deliveries of gas via the pipeline in June.

Germany, which is heavily dependent on Russian gas, has branded the decision to limit supplies as a “political” response over the West’s support for Ukraine.

Russia says it has destroyed an arms depot near the city of Lviv, in a rare strike on western Ukraine, using “air-launched high-precision long-range missiles”.

The defense ministry says it also destroyed four warehouses containing rockets, artillery pieces and ammunition in the southern region of Mykolaiv and the eastern region of Donetsk.

The United States blacklists Russian President Vladimir Putin’s purported girlfriend, Alina Kabaeva, a former Olympic gymnast, and the tycoon owner of the second-largest estate in London, Andrey Grigoryevich Guryev, in its latest round of sanctions.

It also slaps business bans on several other oligarchs believed to be close to Putin, four officials Russia has named to administer occupied territories in Ukraine, and around two dozen high technology institutes and companies, including key state-backed electronics entities.

The situation is “volatile” at Europe’s largest nuclear power plant, which fell under Russian control in March, the head of the international nuclear agency IAEA, Rafael Grossi, says.

The IAEA has been trying to send a mission to the Zaporizhzhia plant which, although under Russian control, is still being operated by Ukrainian staff.

Ukraine has rejected the efforts, which it says would legitimise Russia’s occupation of the site in the eyes of the international community.

“Every principle of safety has been violated one way or the other,” Grossi tells a news conference at UN headquarters in New York.