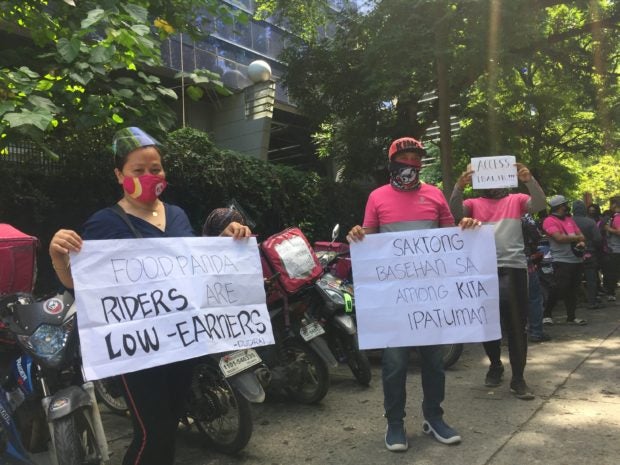 Foodpanda riders in Davao City held a protest on July 15 to dramatize their complaints which, they claimed, the management continues to play deaf to. (CONTRIBUTE PHOTO)

DAVAO CITY, Davao del Sur, Philippines — The regional office of the National Labor Relations Commission (NLRC) has ruled that the seven dismissed riders of delivery service company Foodpanda Philippines were regular workers and were entitled to back wages and other benefits from the company.

In a ruling on June 30 but which the Inquirer received only this week, labor arbiter Rovyne Jumao-as of the NLRC Davao regional office said an “employer-employee” relationship existed between the riders and the company, contradicting the claim of Foodpanda that the complainants were only contractors or “delivery freelancers” who use the company’s delivery app to reach consumers.

Jumao-as, however, ruled against three other complainants as their access to the system of Foodpanda, which uses technology in its operations, was not impeded since the company was able to show that they were still employed.

“First of all, we thank God for not abandoning us in our quest for justice, we thank former Councilor Pamela Librado and her legal team and staff who assisted us and for the NLRC for hearing our side and coming up with a fair ruling,” Carrillo said in a text message to Inquirer. “Now, we are waiting for the next moves of Foodpanda because we are always prepared to fight for our rights.”

Foodpanda, in a separate statement, said it had yet to receive the copy of the NLRC ruling.

“[But] we continue the dialogues that we have been holding with our active Ka Panda partner delivery freelancers to discuss their concerns. In recent weeks especially, we have worked closely with our Ka Pandas to address their concerns regarding fuel price hikes, and have been supporting them to augment their earnings through additional incentives in their quests, fuel discounts from our partner providers, and facilitating increased tipping through our app,” it said. The company also thanked riders across the country for “continuing to be valued freelance partners in serving our partner vendors and end-users.”

In ruling against the company, Jumao-as used the four-fold test to determine whether there was employee-employer relationship: the selection and engagement of employee, the payment of wages, the power to discipline and dismiss, and the employer’s power to control the employee with respect to the means by which the work is to be accomplished.

The arbiter pointed out that the company failed to show that the complainants “were hired because of their unique skills and talents, and that Foodpanda did not exercise control over the means and methods of their work.”

Citing jurisprudence, the labor arbiter pointed out that under the test, “the power of control is regarded as the most significant determinant of the existence of an employer-employee relationship.”

“Central to Foodpanda’s power of control is its rating system which primarily governs its relationship and dealing with its riders,” the ruling said. It added that the rating system had been a unilateral mechanism of the company without considering the point of view of the driver as the company “can and will conveniently deny riders, perceived to be in violation of its standards or rules, access to the apps thus denying him work opportunity.”

The case started when the riders, in three groups, filed separate cases before the NLRC for actual illegal dismissal and illegal separation and nonpayment of benefits against the company.

They claimed that during the first quarter of last year, they started questioning the computation of their earnings for eight-hour work as their income on a daily basis fluctuated between P200 and P600. This led them to confront their manager, Jao Manahan, who was included in the complaint.

As they failed to get an explanation from the company, it was in July when they started discussing a “no show” protest action against the company, but they aborted their plan because they would not be earning anything.

Later that month, they found out that they were removed from the mobile application used in the operations.

The complaint claimed Carrillo contacted Manahan, through Facebook Messenger, for them to be reinstated, but the latter had told him and the others that they could not return anymore.

The two sides initially held a dialogue but did not reach an agreement.

The company, in its argument, said that an employee-employer never existed as the riders signed a freelance agreement and “were engaged as contractors.” Those who were dismissed from the platform, it said, violated provisions of the agreement, particularly their failure to work during their shifts.

Foodpanda also claimed that Carrillo persuaded the other riders to violate the terms of their respective agreements with the company.