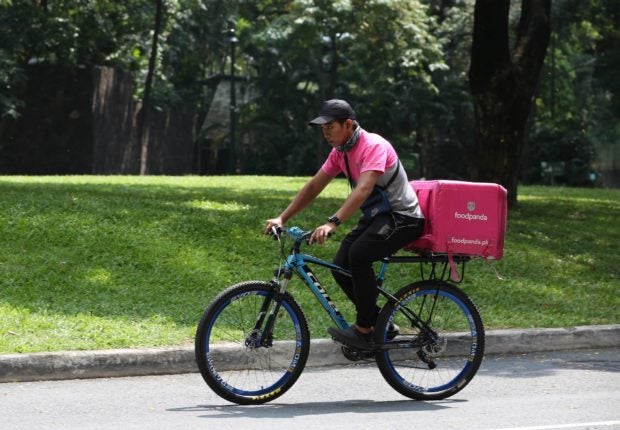 MANILA, Philippines — The Department of Labor and Employment (DOLE) has scheduled a dialogue on July 26 between officials of Foodpanda and the group of riders suspended for 10 years by the popular food delivery app.

The riders, who were penalized for planning to protest wage issues by going offline last week, had filed a complaint in the DOLE questioning their termination from work, the discrepancies in the computation of their delivery fees and other unfair labor practices.

Ahead of the upcoming meeting with the DOLE, Foodpanda has reached out to some of the riders that it suspended to ask for a private meeting, according to text messages seen by the Inquirer.

In a message to at least 14 suspended riders, the company sought a meeting in its hub in Davao City to discuss their “offboarding”. Instead of seeing the riders as a group, they were divided in batches, with different times set for Tuesday and Wednesday between 10 a.m and 7:30 pm.

Edmund Carillo, president and cofounder of the Davao United Delivery Riders Association Inc., said on Monday they would not attend the meetings and instead go to the July 26 dialogue arranged by DOLE regional officer-in-charge Randolf Pensoy.

Foodpanda suspended about 30 of its riders in Davao City last week. When hundreds of riders rallied in response, another 70 who participated in the protest were suspended for 10 years as well. Some accounts were reactivated after the company offered to give back their jobs if they shared information on the leaders of the protest that went viral on social media and sparked calls for a boycott of the app.

In Congress, a Makabayan representative has called for a congressional probe of Foodpanda’s long suspension of its riders, pointing out that the Labor Code allowed a maximum of only 30 days for preventive suspensions.

“Planning protests are worthy of suspension? What laws are observed by Foodpanda? Do they have their own Labor Code? Their own Bill of Rights where planning and joining protests are outlawed? What Foodpanda did to their riders is unjust and is unfair labor practice,” said Bayan Muna Rep. Ferdinand Gaite.

In a statement on Monday, the legislator pointed out that the rules implementing the Labor Code stated that an employer could place a worker under preventive suspension if continued employment “poses a serious and imminent threat to the life or property of the employer or of his co-workers.”

“In fact, Foodpanda’s action of suspending its riders betrayed itself. It revealed the existence of an employer-employee relationship. The suspension clearly shows that their riders should be considered as employees and not merely ‘freelancers’,” Gaite said.

He pushed for a congressional probe not just of the suspension, but also of the employment status of delivery app riders.

The DOLE “must also look into this practice of supposed ‘individual contractors’ providing delivery services that should by law be considered employees of the company. We should protect the riders from these abuses and irrational actions,” Gaite added.

A “labor dispute waiting to happen” was how the chair of the Senate labor committee described the woes suffered by the riders.

Sen. Joel Villanueva said he would also call the attention of the DOLE to look into their plight, highlighting the need to protect the rights of freelancers.

“In its current form, the Labor Code does not recognize the existence of freelance workers,” the senator said, urging his colleagues to support the proposed Freelancer Protection Act pending on the Senate plenary floor.

Sen. Risa Hontiveros said the DOLE should swiftly mediate and look into the possible labor abuses experienced by the riders.

The objective, she said in a statement, was not just to avoid interruptions in the service but to install safeguards to ensure the protection of food delivery riders as they are also workers.

“These delivery riders may not be considered employees now, but they are all workers who are not only struggling to help their families but also helping the economy. While the DOLE does not issue guidelines or does not intervene, nothing will be done,” Hontiveros said.

In his statement, Villanueva noted that the pandemic had altered the business landscape and displaced millions of workers, forcing many to turn to freelancing to make ends meet.

“The problems faced by the riders of food delivery service apps prove the serious need to enact the Freelancers Protection Bill,” he said in Filipino.

Villanueva said food delivery riders deserved stronger labor protection as they faced a variety of occupational hazards such as harassment by clients and fake bookings.

“Our laws have to be responsive to the changes in industries and job markets. If there are indeed 1.5 million freelancers, and if we factor in their families, this means there are more than six million Filipinos affected by our action or inaction on this matter,” he said.

WITH REPORTS FROM JULIE M. AURELIO AND DJ YAP