Mountainous portion of Iligan-Bukidnon highway collapses due to heavy rains 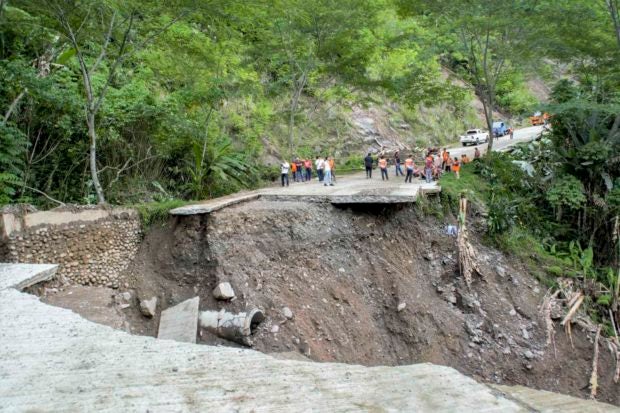 The mountainous portion of the Iligan-Bukidnon Road collapsed on Sunday because of continuous heavy rains. CONTRIBUTED PHOTOS (From the DPWH First Engineering District)

ILIGAN CITY—Authorities advised vehicles plying this city and Talakag, Bukidnon, and the other way around to take the Cagayan de Oro city route after a portion of the Iligan-Bukidnon Road collapsed Sunday after continuous heavy rains.

A team from the first engineering district of the Department of Public Works and Highways (DPWH) on Sunday inspected the 35-meter portion of the highway at Sitio Lacub in Rogongon village that suffered heavy damage.

The two-lane concrete road collapsed at the isolated sitio, where years of logging created a dent along the mountainside directly leading to the road, allowing the water from the heavy rainfall to weaken the soil supporting the road foundation, eventually leading to its collapse, he said.

The DPWH team who went to the area said the mountainside dent, the size of a canal, was where loggers used to bring down their cut logs to the waiting cargo trucks along the highway, Labial said.
.
Aly Khan U. Ali, DPWH district engineer, directed maintenance personnel to send heavy equipment to the area to do major clearing work.

Ali said they were also verifying information on the alleged logging activities in the area.

Cybee Serino, a barangay councilor, said another landslide occurred at dawn on Monday, August 1, in nearby Sitio 11 next to Lacub, where tons of soil cascaded down and covered portions of the highway.

Serino said they were advising all types of vehicles on their way to Talakag, Bukidnon, Davao City, and Cotabato to take the Cagayan de Oro City route as the Iligan to Bukidnon Road remained impassable. “We advise all vehicles coming from Iligan and those coming from Bukidnon on the way here to use the alternative route to avoid being stranded,” he said.

Labial said the DPWH team had started clearing operations on the hillside to create an access road for people and single motorcycles but not yet for four-wheel vehicles.

“Right now, our maintenance team is clearing the hillside to build an access road for pedestrians and single motorcycles to be completed in three to four days,” said Labial.

“Engineer Ali has also made his representation to the DPWH regional office on Monday to discuss the budget proposal for the major repair of the collapsed road,” he added.