Record ice melt in Greenland: Why should we care? | Inquirer News

Record ice melt in Greenland: Why should we care? 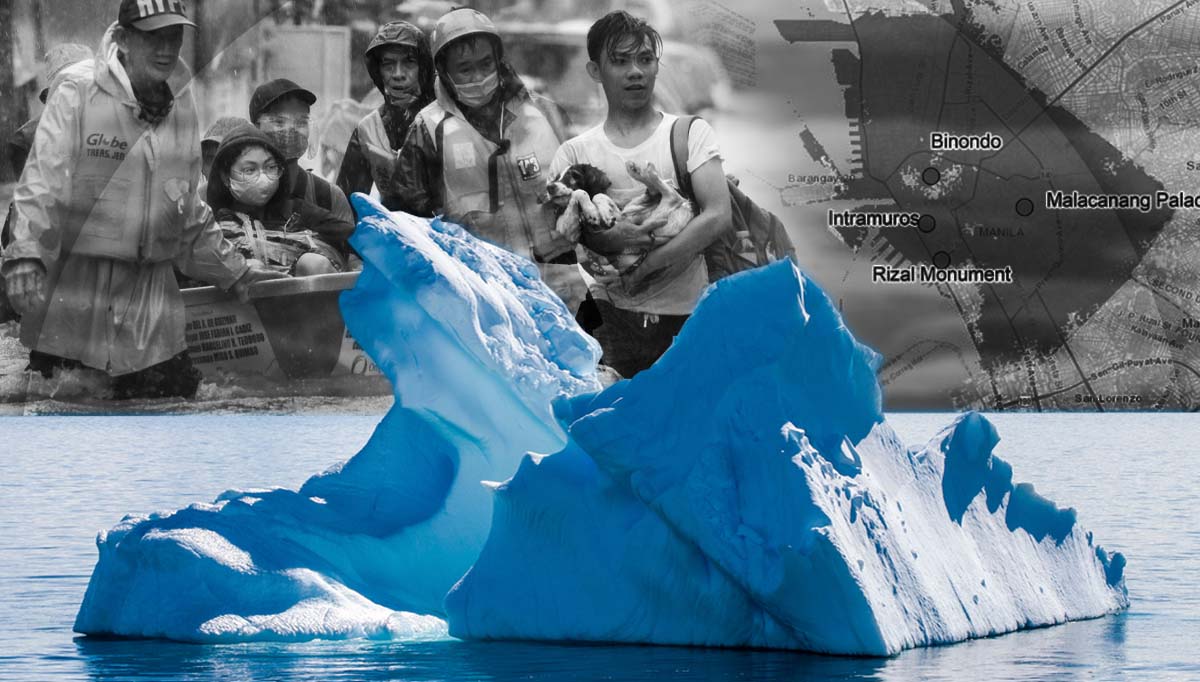 MANILA, Philippines—Since the early 1990s, many of the world’s glaciers have been rapidly melting, mainly due to human activity. In the past years, scientists have been raising the alarm on Greenland’s ice sheets, which may be approaching a dangerous tipping point.

The Antarctic Ice Sheet—one of the Earth’s two polar ice caps and is the largest single piece of ice on Earth—contains 30 million cubic kilometers or 7.2 million cubic miles of ice, according to the National Snow and Ice Data Center (NSIDC) in the University of Colorado in Boulder (CU Boulder).

However, many studies have pointed out that since the early 1990s, the Antarctic Ice Sheet has lost at least three trillion tons of ice.

The World Wildlife Fund (WWF) also found that over the past 30 years, “the oldest and thickest ice in the Arctic has declined by a stunning 95 percent.”

If emissions and global warming, which cause climate change, continue to elevate and are left unchecked, scientists warned that the Arctic could be ice-free by the summer of 2040.

While the worsening polar ice cap melting has been a huge concern among experts, world leaders, and the public over the past decades, scientists are now directing the spotlight on another huge issue: Greenland’s ice melting.

Several studies published in the past years noted the rapid melting of Greenland’s ice sheet.

According to data from the National Aeronautics and Space Administration (NASA), Greenland’s ice sheet was originally 1.7 million square kilometers and had an average thickness of 2.3 kilometers or 1.4 miles.

There were multiple and varying accounts of how much of Greenland’s ice sheet has been lost since the late 1990s.

In December 2019, a study from NASA and the European Space Agency (ESA) found that around 3.8 trillion tons of ice had been lost from Greenland’s ice sheet between 1992 and 2018.

The same study also noted that Greenland “appears to have hit a tipping point” between 2002 to 2003, when the ice loss rapidly accelerated.

Different studies, scientists, and organizations—aside from NASA, ESA, and NSIDC—also reported an estimated amount of ice lost from Greenland’s ice sheets per year.

The yearly average loss recorded was around 259 billion tons or 235 billion metric tons since 2003.

However, in 2012, NASA and a study published in the peer-reviewed journal Communications Earth & Environment discovered that Greenland lost more ice than previously estimated—511 billion tons or 464 billion metric tons of ice.

Although scientists have emphasized that there were many years when Greenland gained ice despite the loss, the melting of the ice sheet was faster than expected. 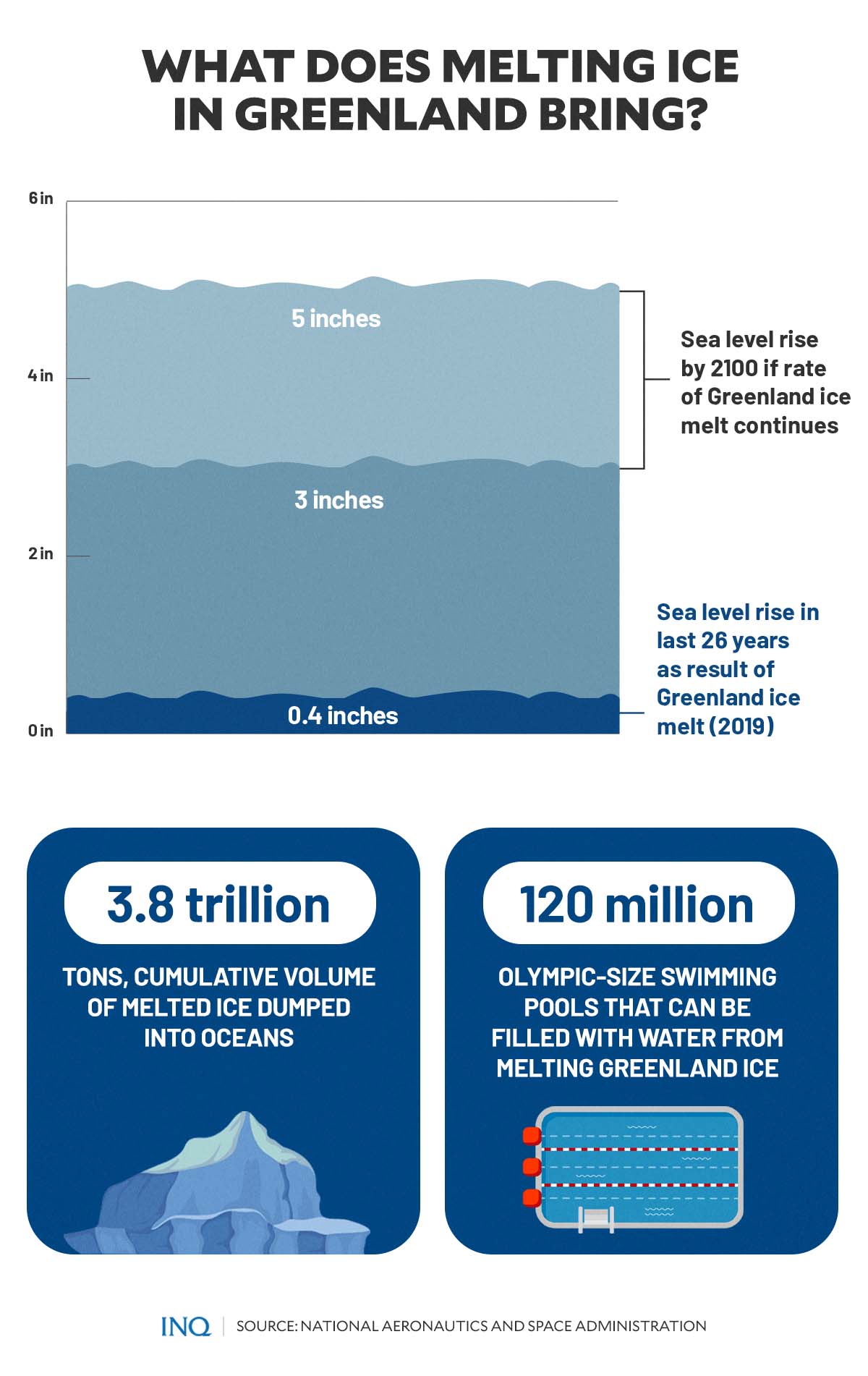 In 2019, a record amount of 586 billion tons or 532 metric tons of ice had melted in Greenland due to warmer temperatures. Experts said the massive melt was enough to cover California in more than four feet—1.25 meters—of water.

“Not only is the Greenland ice sheet melting, but it’s melting at a faster and faster pace,” said Ingo Sasgen, lead author of the study and a geoscientist at the Alfred Wegener Institute in Germany.

The 2021 State of the Climate report by the World Meteorological Organization (WMO)—a UN agency—cited data from the Danish Arctic monitoring service Polar Portal, which showed that the ice sheet lost around 166 billion tons during a 12-month period starting September 2020 to August 2021.

The amount of ice melt in Greenland continues to rise. Last month, it has lost:

The numbers, however, do not stop there. The increasingly rapid meltdown in Greenland’s ice sheet is alarming as it directly impacts global sea levels.

“Glaciers on Greenland’s coast move ice from the interior of the island to the North Atlantic, where they break off as icebergs and eventually melt into the ocean,” NASA said.

“As glaciers and ice sheets melt, they add more water to the ocean,” it added.

If Greenland’s ice sheet were to melt completely—which NASA explained could take thousands of years—the global sea level would increase by up to seven meters or 23 feet.

“We knew we had one big problem with increasing rates of ice discharge by some large outlet glaciers,” Michael Bevis, a geoscientist at Ohio State University, said.

“But now we recognize a second serious problem: Increasingly, large amounts of ice mass are going to leave as meltwater, as rivers that flow into the sea. This is going to cause additional sea-level rise. We are watching the ice sheet hit a tipping point,” Bevis added.

Still, present data showed that the increase in sea levels caused by Greenland’s ice sheet melt had a significant impact—possibly affecting even the Philippines.

According to WWF, the Greenland and Antarctic ice sheets are the largest contributors to global sea level rise.

Currently, WWF said, the Greenland ice sheet is disappearing four times faster than it did in 2003 and has already contributed 20 percent of the current sea level rise.

“How much and how quickly these Greenland and Antarctic ice sheets melt in the future will largely determine how much ocean levels rise in the future. If emissions continue to rise, the current rate of melting on the Greenland ice sheet is expected to double by the end of the century,” it explained.

Until 2000, scientists said the main driver of sea level rise was melting glaciers and the expansion of ocean water as it warms.

However, over the last couple of decades, the Greenland ice sheets have become the single largest source of sea level rise.

This is equivalent to over 140 trillion gallons—around 532 trillion liters—of water.

“Add in more water from melting in other ice sheets and glaciers, along with an ocean that expands as it warms—and that translates into slowly rising sea levels, coastal flooding, and other problems,” he added.

In the past 26 years, the melting of an ice sheet in Greenland has added 0.4 inches or 11 millimeters to sea-level rise.

NASA said the cumulative 3.8 trillion tons of melted ice is equivalent to adding water from 120 million Olympic-size swimming pools to the ocean every year for 26 years.

“As a rule of thumb, for every centimeter rise in global sea level, another 6 million people are exposed to coastal flooding around the planet,” said Andrew Shepherd, a scientist from the University of Leeds in the United Kingdom.

“On current trends, Greenland ice melting will cause 100 million people to be flooded each year by the end of the century, so 400 million in total due to sea level rise.”

Both NASA and WWF added that in addition to storm surges and high tides that will increase flooding in many regions, sea level rise would exacerbate hurricanes and typhoons.

“The full set of consequences of future melt from the Greenland Ice Sheet remains uncertain, but even a small increase in sea level can have devastating effects on ports and coastal zones, cause destructive erosion, wetland flooding, and aquifer and agricultural soil contamination with salt,” said Erik Ivins, NASA’s Jet Propulsion Laboratory in Pasadena, California.

NASA scientists have projected that by 2100, there will be an approximate 3 to 5 inches—70 to 130 millimeters—global sea level rise. This projection aligns with previous worst-case projections if the average rate of Greenland’s ice loss continues.

“There’s a lot of places, like in Florida especially, where one meter alone would cover a lot of existing land areas,” Michalea King, a researcher at Ohio State University, said. “And that’s exacerbated when you get storms and hurricanes and things like that, that then cause extra surge on top of a higher baseline.”

As the situation in Greenland worsens the global sea levels, by the years 2030 and 2050, many cities across the globe are predicted to sink or go underwater, affecting millions of populations and amounting to billions in damage.

Among these cities were found in the Philippines.

Last year, the Department of Foreign Affairs-Maritime and Ocean Affairs Office (DFA-MOAO) raised the alarm about the impact of rising global sea levels.

During the 21st Meeting of the UN Open-ended Informal Consultative Process on Oceans and the Law of the Sea, DFA-MOAO Director John Francis Herrera said that the Philippines has already begun to experience the impacts of sea level rise. 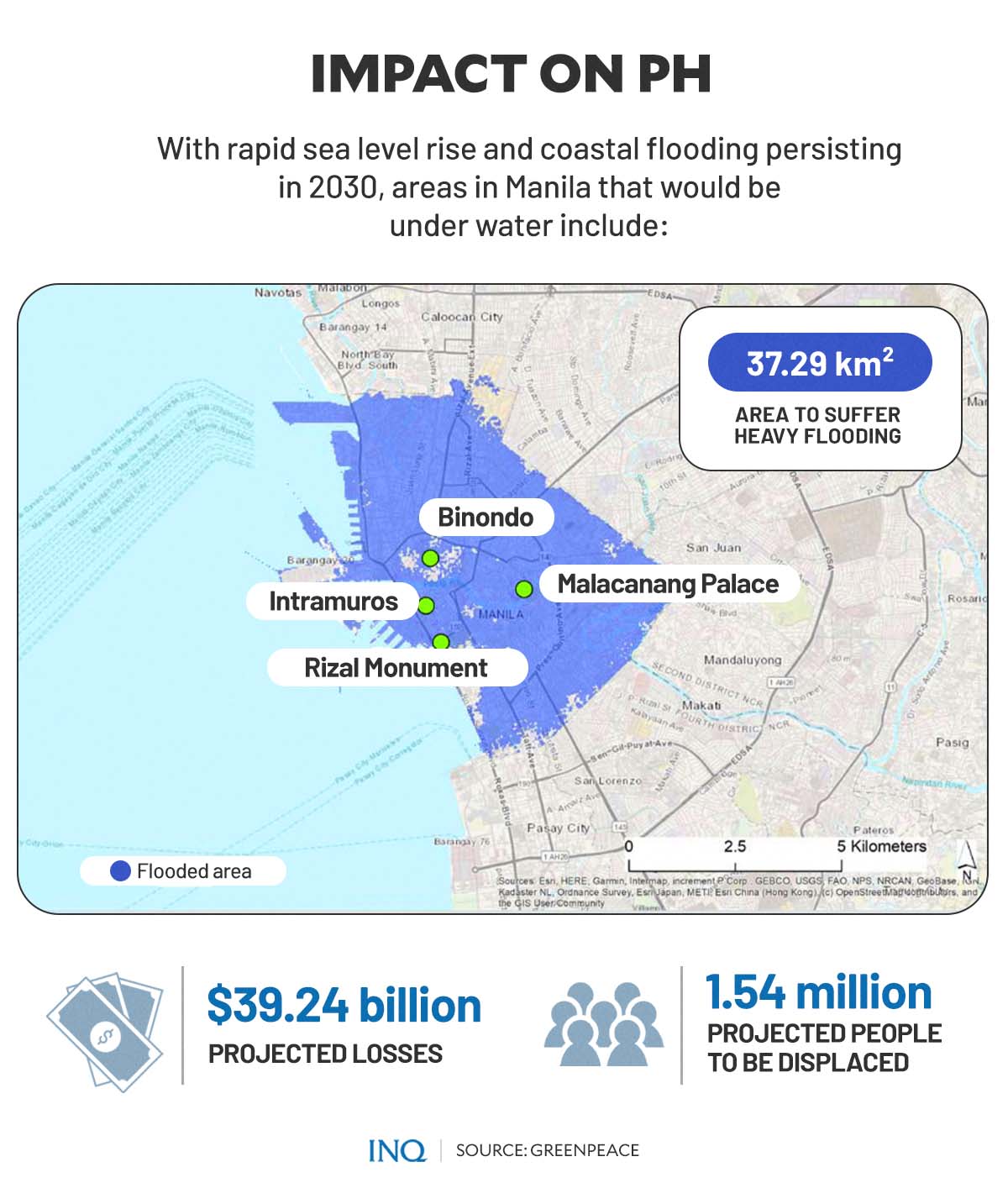 “[O]ur future survival is at risk if sea level rise is allowed to go on unabated,” Herrera said.

In 2011, the Global Facility for Disaster Reduction and Recovery and World Bank ranked four cities in the Philippines—San Jose, Manila, Roxas, and Cotabato—among the top 10 East Asian cities likely to be hit by rising global sea levels and storm surges.

The United States Agency International Development (USAID), in a climate vulnerability profile report in 2012, said the projected sea level rise that will impact the Philippines’ coastal municipalities will be around 23 to 47 centimeters by the end of the century—around 2090 to 2099.

In 2012, the Climate Change Commission (CCC)—the lead policy-making body of the Philippine government tasked with coordinating, monitoring, and evaluating government programs and ensuring the inclusion of climate change in national, local and sectoral development plans—released a similar report.

“Certain parts of the country have risen sea level by 5.7– 7.0 millimeters per year from 1993-2015. This is approximately double the highest global average rate of 2.8–3.6 millimeters per year,” an article by Climate Tracker Asia stated, citing data from CCC’s report.

In a study released in October 2019 by Climate Central and published in the Nature Communications journal, findings have shown that major cities in the National Capital Region (NCR) could likely be submerged by coastal flooding by the year 2050 due to rising seas.

Among the Philippine cities that are likely to sink due to coastal flooding, based on a screening tool provided by Climate Central, include:

A more recent study published by Greenpeace East Asia likewise found that continuing and extreme sea level rise in the past decades, due to climate change, is fueling stronger tropical cyclones that could soon sink major Asian cities, including Manila in 2030, and displace millions of people and destroy economies worth billions of dollars.

According to the study, at least 87 percent—or 37.29 square kilometers—of the City of Manila’s land would feel the impact of the 10-year flood in 2030. More than 1.54 million Manila residents could be displaced, leading to a $39.24 billion decline in the city’s GDP.

The disastrous 10-year flood could inundate and damage the historical landmarks and popular tourist destinations in the city, including the Jose Rizal National Monument, Luneta Park, Binondo, and the “walled city” of Intramuros.

READ: Climate crisis to turn Manila, other Asian cities into bodies of water