PH calls for caution over Pelosi visit to Taiwan 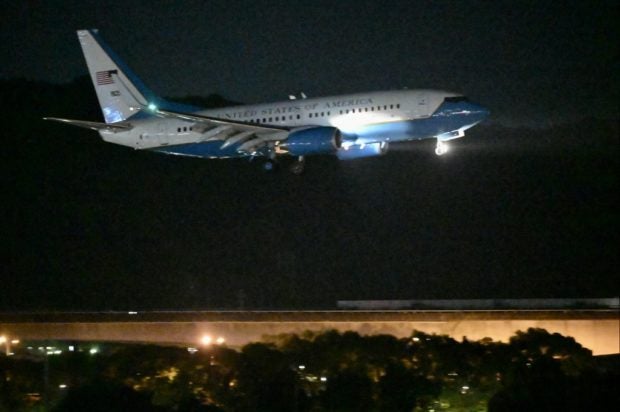 A US military aircraft with US House Speaker Nancy Pelosi on board prepares to land at Sungshan Airport in Taipei on August 2, 2022. – Pelosi landed in Taiwan on August 2 evening, defying days of increasingly stark warnings from China that have sent tensions between the world’s two superpowers soaring. (Photo by Sam Yeh / AFP)

MANILA, Philippines — The Philippines called on the United States and China to act responsibly and “avoid any miscalculation,” as Manila was put in a delicate position over unconfirmed reports on Tuesday that US Speaker Nancy Pelosi would be flying to Taiwan via Clark International Airport in Pampanga, the site of a former US military base.

The Department of Foreign Affairs (DFA) neither confirmed nor denied reports that Pelosi would be using Clark as a jump-off point from Malaysia to the self-ruled island claimed by Beijing, saying the Philippines “is closely monitoring developments in this regard.”

DFA spokesperson Teresita Daza said the agency “has not received any request from the US government or their embassy in Manila for Speaker Pelosi to transit and/or visit the Philippines as part of her current swing of visits to the region.” But later Tuesday, a US air force jet that flew Pelosi to Malaysia headed toward Borneo before turning north to the Philippines, its flight path on tracking website Flightradar24 showed. It was not immediately established if Pelosi or her delegation were on flight SPAR19. The plane left Kuala Lumpur at 3:42 p.m. and flew east toward Borneo on a route that skirted the South China Sea.

The US Embassy in Manila did not immediately respond to queries on the matter at press time.

China views visits by US officials to Taiwan as sending an encouraging signal to the pro-independence camp on the island. Washington has no official diplomatic ties with Taiwan but is bound by US law to provide it with the means to defend itself. (See related story in World, Page A7.)

Daza said: “It is important for the US and China to ensure continuing communication to avoid any miscalculation and further escalation of tensions.”

“We trust that China and the United States will be responsible actors in the region,” she said.

A visit to Taiwan by Pelosi, who is second in the line of succession to the US presidency and a longtime critic of China, would come amid worsening ties between Washington and Beijing.

Chinese Ambassador to Manila Huang Xilian, in a television interview, urged the Philippine side to “strictly abide by the one-China principle and handle all Taiwan-related issues with prudence to ensure sound and steady development of China-Philippines relations.”

The White House on Monday said it expected China in the coming days to escalate its response to a potential visit by Pelosi to Taiwan, adding that the United States would not be intimidated.

China’s actions could include firing missiles near Taiwan, large-scale air or naval activities, or further “spurious legal claims” such as Beijing’s assertion that the Taiwan Strait is not an international waterway, White House National Security Council spokesperson John Kirby said.

On the other hand, the Chinese Foreign Ministry on Monday said Pelosi’s visit to Taiwan would “constitute a gross interference in China’s internal affairs.”