Senators set for face-off with Palace over vetoes 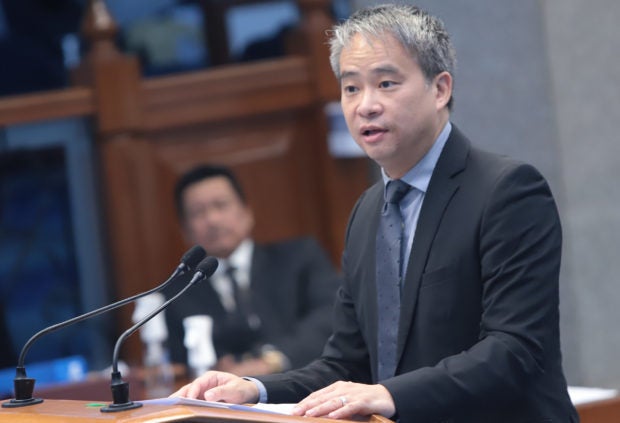 MANILA, Philippines — All 24 senators would be facing off with representatives of the executive department in upcoming meetings of the Legislative-Executive Development Advisory Council (Ledac) in order to prevent a repeat of the successive vetoes of five major bills that were products of hard legislative work, according to Senate Majority Leader Joel Villanueva.

Villanueva told reporters on Tuesday that the senators were invited to attend the Ledac and would be asked to present their priority measures for consideration by Malacañang and to synchronize these with the 19-point agenda of the executive department.

“We were told that in the coming week or two, we will be having the Ledac. This is a welcome development considering that a high number of the measures we passed have been vetoed,” he said.

“This is not only because of the series of veto messages, but primarily, it’s natural that we do this after the [State of the Nation Address of the president]. But we don’t want a repeat of what happened before,” he said referring to the five bills that were passed in the 18th Congress but were struck down by President Ferdinand Marcos Jr..

All the bills went through deliberations in bicameral conference committees, Villanueva said.

Marcos vetoed the bill to create the Bulacan Airport City Special Ecozone with tax privileges; the measure expanding the franchise area of the Aboitiz-owned Davao Light and Power Co.; and the bill to “strengthen” the Office of the Government Corporate Counsel, which gave financial perks to officers of state-owned companies.

On Friday, the president vetoed two more bills — one granting tax exemption to the honorarium and allowances for government workers performing poll duties and the bill creating the proposed Philippine Transport Safety Board.

Marcos vetoed four of the five bills on grounds that they either reduced revenue or created unnecessary government spending.

“That is not very easy to swallow, because you work really hard for a specific measure, and (the legislative process) takes so much time and government resources,” he said.

Of 12 major bills passed by the previous Congress, five were rejected by the President and seven he allowed to lapse into law, including one that lowers the age for vape users.

At the Ledac, lawmakers will deliberate on the 19-point legislative agenda of the Marcos administration that is expected to be put forward by the executive department, and determine which of these will be their priority, Villanueva said.

The Ledac, which was created by law in 1992 under the late President Fidel Ramos, serves as a “consultative and advisory body to the President,” who chairs the National Economic and Development Authority Board, on certain programs and policies essential to reaching the country’s economic goals.

It also serves as a “venue to facilitate high-level policy discussions on vital issues and concerns affecting national development.”

Villanueva observed that it was taking Malacañang a long time to appoint the head of the Presidential Legislative Liaison Office (PLLO) with the Ledac expected to happen in a week or two.

The PLLO promotes “presidential legislative initiatives and other administration-sponsored priority policy reforms and development programs,” according to its website.

It conducts a “strategic information dissemination campaign” and a “sustained day-to-day collaboration” with the Senate and the House of Representatives, and with other “interest groups.”

“I was surprised to learn that it was not yet made official, because yesterday at the senators’ caucus, we already talked about it,” Villanueva said, referring to the reported selection of former Batangas Rep. and House Secretary General Mark Llandro Mendoza as PLLO chief.

Read Next
‘Maid in Malacañang’ offends Cebu nuns on eve of premiere
EDITORS' PICK
Heads may roll at BOC, says Palace if sugar smugglers are allowed to use recycled import permits
Palace: Biggest supermarkets in PH commit to sell sugar at P70 per kilo
What to watch out for when selecting a video surveillance solution
House energy committee chair Arroyo bats for cheap electricity
vivo brings to the Philippines a powerful smartphone with a slimmer body, the vivo Y02s for only PHP 6,499
DOH reports increase in daily COVID-19 deaths, mostly unvaxxed
MOST READ
Metro Manila’s No. 1 wanted man arrested, says NCRPO
Brian Poe-Llamanzares receives his PhD in Public Administration
Alyssa Valdez to miss Creamline’s AVC Cup campaign
Mayor bares issues vs closed QC school
Don't miss out on the latest news and information.