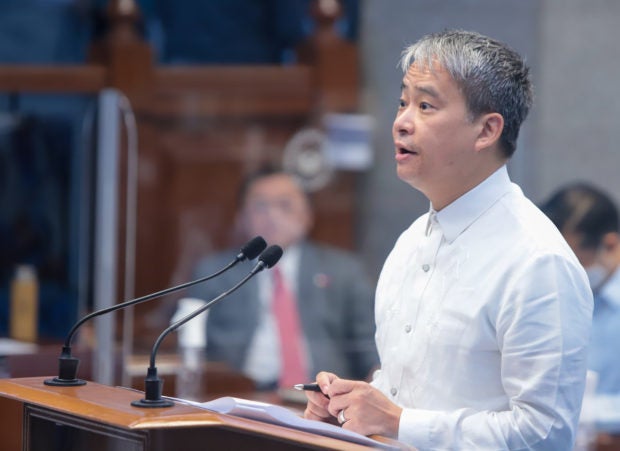 FILE PHOTO: Majority Leader Joel Villanueva proceeds to manage the business of the Senate Tuesday, July 26, 2022. Tasked to schedule the day-to-day business on the plenary floor, Villanueva, in consultation with the majority bloc, has an important role in shaping the chamber’s overall legislative agenda. (Bibo Nuevaespana/ Senate PRIB)

According to Villanueva, they were informed that the Ledac would be convened in the next week or two.

This is a “welcome development,” he said, noting the number of measures earlier vetoed by President  Ferdinand Marcos Jr. – dubbed as a “bill-vetoing spree” by Senator Francis “Chiz” Escudero.

“Ito ay pinag-usapan so in the next week or two, magtatawag na,” Villanueva said in an interview at the Senate.

(This has been talked about so in the next week or two, a meeting will be called)

To prepare for the Ledac meeting, the Majority Leader said Senate President Juan Miguel Zubiri had requested every senator to submit their priority measures so they could synchronize and tackle them there.

Villanueva said Zubiri would also suggest to Malacañang that all 24 senators should be invited at least to the first meeting of Ledac.

“We don’t want a repeat of what happened before and you know the past three weeks, ang daming na-veto so ‘yun ang isa rin sa concern ng bawat isa (so many bills were vetoed so that is one of the concerns of each member),” he said.

“Hindi madaling tanggapin kapag ganun (It’s not easy to accept). When you work really hard for a  specific measure – you hear this, you debate on this on the floor, you consult and it takes so much time and of course government resources,” the Majority Leader pointed out.

Villanueva, however, noted that the convening of Ledac is important not only because of the “series of veto messages” Congress has been getting but because they also have to tackle the 19 priority bills that Marcos Jr. himself mentioned in his first State of the Nation Address.

Read Next
Probe into death of 2 OFWs in Dubai ongoing —DFA
EDITORS' PICK
Shop smarter with vivo’s big 12.12 holiday deals
The vivo Y02 is now available in the Philippines for only PHP 5,299
How not to retire as an ex-president
Hidilyn Diaz wins only gold missing from her collection
House energy committee chair Arroyo bats for cheap electricity
Lawmakers eyeing more changes in Maharlika plan
MOST READ
Jovit Baldivino, ‘Pilipinas Got Talent’ winner, dies at 29
Andi Eigenmann, family in Manila for a quick visit; Ellie dines with grandma Jaclyn Jose
LPA enters PAR, to likely strengthen into tropical depression in coming days – Pagasa
11 Filipino imports named to Japan B.League Asian All-Star team
Don't miss out on the latest news and information.