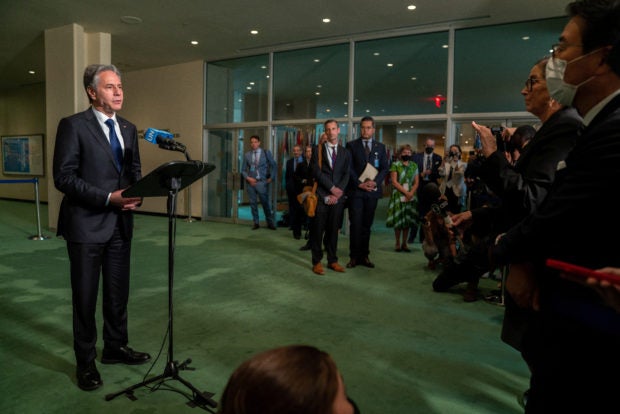 Russia in March was accused of firing shells dangerously close to the Zaporizhzhia nuclear power plant as its forces took it over in the first weeks of the invasion of Ukraine.

Washington is “deeply concerned” that Moscow was now using the plant as a military base and firing on Ukrainian forces from around it, Blinken told reporters after nuclear nonproliferation talks at the United Nations in New York.

“Of course the Ukrainians cannot fire back lest there be a terrible accident involving the nuclear plant,” he said.

“We repeatedly stated that actions of our armed forces in no way undermine Ukraine’s nuclear security or impede routine operation of the NPP (nuclear power plant),” the Russian U.N. mission said in a statement.

It said the sole purpose of Russian forces’ taking over Zaporizhzhia was to “prevent Ukrainian nationalist formations and foreign mercenaries from making use of the current situation in Ukraine in order to carry out a nuclear provocation with most unpredictable consequences.”

Ukrainian officials have previously accused Moscow of basing troops and storing military equipment on the grounds of the power station.

On July 20 Russia accused Ukraine of firing two drones at Zaporizhzhia, which is also the largest nuclear plant in Europe, but said the reactor was undamaged.

Ukraine’s state nuclear company, Energoatom, did not comment on the purported drone impact.

The International Atomic Energy Agency (IAEA), the U.N.’s atomic watchdog, should be given access to the plant, Blinken said.

“While this war rages on, inaction is unconscionable,” IAEA Director General Rafael Grossi said on Monday at the U.N. nuclear nonproliferation talks. “If an accident occurs at Zaporizhzhia Nuclear Power Plant in Ukraine we will not have a natural disaster to blame. We will have only ourselves to answer to.”