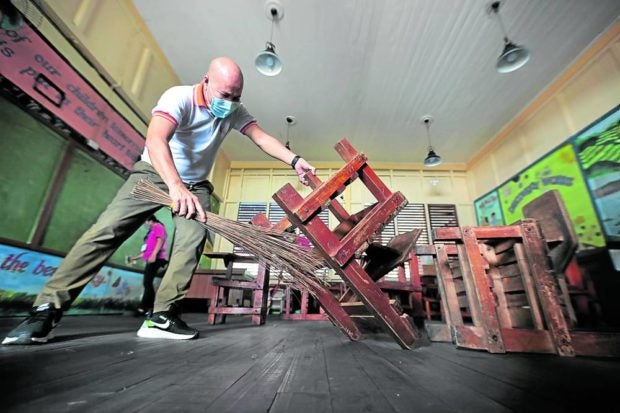 VOLUNTEER WORK | School principal Juphet Capuyan leads teachers at San Francisco Elementary School in Quezon City in cleaning their classrooms as part of the Brigada Eskwela kickoff on Monday to ensure that children will have safe and better learning spaces when they return this month. (Photo by GRIG C. MONTEGRANDE / Philippine Daily Inquirer)

MANILA, Philippines — Chlarise Mae delos Santos was tidying up the classroom as she waited for her husband, an electrician, who took a half day off work to help paint walls and fix electrical wiring at Aurora A. Quezon Elementary School in Manila on Monday.

In a few weeks, the school will open its gates once again to thousands of students, including their child in kindergarten class, after a two-year pandemic-induced break.

“I helped clean the room (instead of donating materials) because I prefer doing the work. Other parents have jobs but I am a housewife so it’s OK for me to volunteer my time for Brigada (Eskwela),” Delos Santos told the Inquirer.

The Delos Santos couple were among the nine parents in their section who showed up during the first day of the Brigada Eskwela program of the Department of Education (DepEd) at the Manila school, signaling the gradual shift to the “new normal” among public schools at the basic education level nationwide.

Brigada is the yearly preparatory gathering of teachers, learners, and their parents a few weeks before the opening of classes, typically involving repairs, cleaning, repainting, and maintenance of facilities on school premises. It will run until Aug. 26.

The 2022-2023 academic year officially starts on Aug. 22, and schools will have the option of holding full in-person classes or under a setup blending physical sessions and distance learning until Oct. 31.

By Nov. 2, however, all public and private schools in the country will switch to five-day in-person classes, under a July 11 order by Vice President and Education Secretary Sara Duterte. The only exceptions are schools identified by the DepEd to have special circumstances and may continue the blended setup.

On Monday, teacher Ria Dolatre was glad to accept the assistance of parents, including the Delos Santos couple, who volunteered their time and energy. Their work started at 8 a.m.

Most of the supplies and materials they were using came from donations, including two gallons of paint and a brand-new electric fan, she said.

Dolatre’s school was fortunate to receive some form of assistance at all. Earlier this year, as schools prepared for the gradual expansion of in-person classes, some teachers had to shell out money and take loans for the retrofitting of classrooms.

Alerted to the reports, the DepEd had said teachers could be reimbursed using the schools’ budget for maintenance and other operating expenses.

When asked if she had to use her personal resources, Dolatre said it was inevitable for teachers to pay in advance as they prepared the rooms for the students.

“Of course, we had to take out personal money,” she said, laughing.

But Dolatre noted that most of the supplies on hand came from friends and other donors.

The school principal, Randy Emen, said many partner organizations and companies were willing to share their time and resources, including school supplies or materials, to the elementary school.

But he still keeps a small white notepad containing his wish list of items to request from Duterte and the DepEd, he said. The list includes “slightly used” office supplies like storage cabinets, office chairs, corkboards and whiteboards.

“During the pandemic, the teachers were not able to use these materials and they got damaged, so slightly used equipment would be of use here in our school,” Emen said.

In a press conference at the Imus Pilot Elementary School in Cavite, Education Undersecretary Gerald Chan said an additional P3.6-billion budget for the management and supervision of physical classes was released to regional offices and schools divisions in July.

But according to Duterte, more than P18 billion will be needed to repair schools that sustained damage from calamities, the latest of which was the magnitude 7 earthquake that struck northern Luzon.

“We haven’t even fixed [or] finished [repairs and rehabilitation from] the destruction [brought about by] one calamity, another calamity has come,” the Vice President lamented.

“And we need more than P18 billion, excluding the P1.4 billion [worth] of damage from the Abra earthquake, to get ourselves out of the quicksand of this year and last year,” she said at the national kickoff of Brigada.

Citing the assessment of the DepEd’s Disaster Risk Reduction and Management Service, Duterte said 451 classrooms were destroyed and 706 classrooms were damaged by the earthquake and its aftershocks in northern Luzon.