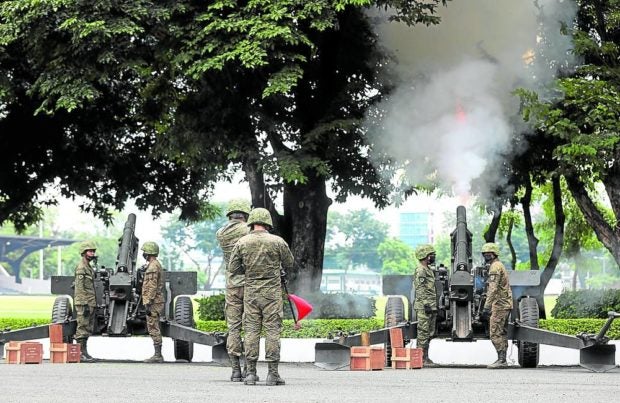 GUN SALUTE The military pays its last respects to the late former President Fidel V. Ramos through a gun salute at the Armed Forces of the Philippines headquarters in Camp Aguinaldo on Monday. Ramos, who also led the AFP and the Department of National Defense before he was elected president in 1992, died on July 31. —NIÑO JESUS ORBETA

MANILA, Philippines — Congress on Monday introduced resolutions that honored the legacy of Fidel V. Ramos (FVR) but omitted references to the Edsa People Power Revolution, which is arguably the defining chapter of his life and career.

Ramos, the country’s 12th president, died on Sunday at the age of 94.

Reporting on his passing, the international media mostly identified him in connection with his key role in the 1986 uprising which toppled the regime of Ferdinand Marcos Sr., since that event was what Ramos had chiefly become known for among the foreign press.

Ramos, incidentally, was a second cousin of Marcos, as his mother and Marcos’ father were first cousins.

Before his break from the Marcoses, his sister, diplomat Leticia Ramos-Shahani, had already defected to the opposition, endorsing the presidential candidacy of Corazon Aquino.

But leaders of the Senate and the House of Representatives, allies of President Marcos Jr., omitted that episode in their tributes which otherwise focused on his efforts to revitalize the economy.

“Fidel Valdez Ramos’ administration is known for the program Philippines 2000, which envisioned the country to be newly industrialized by the year 2000, [and] for instituting economic reforms which drove investments in the country to surge,” said a resolution by Senate President Juan Miguel Zubiri, one of five proposed in the Senate.

Only Sen. Pia Cayetano described in passing Ramos as an “Edsa 1” icon.

Sen. Ramon Revilla Jr. gave due credit to Ramos for encouraging him to go into public service, while Sen. Robinhood Padilla remembered the former president for granting him a conditional pardon on his conviction for illegal possession of firearms in 1994.

At the House of Representatives, Speaker Martin Romualdez led fellow lawmakers in filing House Resolution No. 120, which acknowledged Ramos’ role in “pav[ing] the way for real economic gains that renewed the confidence of the investors in the country and brought the Philippines to a budding ‘tiger economy’ status….”

“FVR was an epitome of management excellence for nation-building [and] his good governance program is unparalleled,” said the Management Association of the Philippines.

“His demise is a great loss not only to our nation but to the Philippine business community as well,” said Philippine Stock Exchange chair Jose Pardo.

Ramos also sought a radical approach in other areas. His 1992 State of the Nation Address (Sona), posted in the Official Gazette, was politically significant for his call to legalize the Communist Party of the Philippines (CPP).

“I ask Congress to repeal Republic Act No. 1700, as amended, so that the Communist Party of the Philippines and similar organizations will no longer be outlawed but allowed to compete freely, openly and peacefully in the political, economic and social arena instead of their following the path of the armed struggle,” he said.

On Sept. 24 that year, he signed RA 7636 which repealed the law outlawing CPP.

In his last Sona in 1997, he spoke about “China’s intentions in the South China Sea.”

“China’s rapidly expanding economy will unavoidably press politically and militarily on East Asia. And in the not-too-distant future, China will once again become a great power,” he said.

Others who paid tribute were the ambassadors of Australia, Canada, China, India, and Japan, the Ministry of Foreign Affairs of Taiwan as well as the embassies of Denmark, France, Israel, and New Zealand.

Negros Occidental Gov. Eugenio Jose Lacson said his “legacy of astute leadership and service will always be honored by the entire nation.”