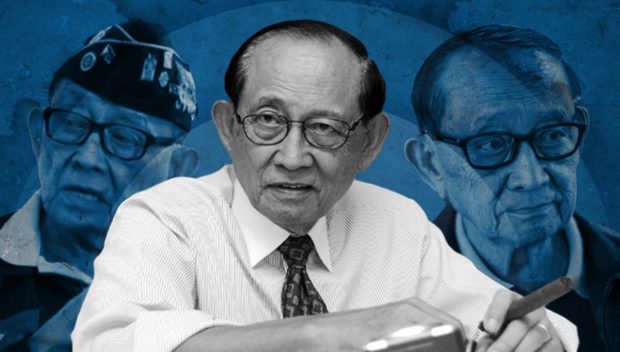 MANILA, Philippines—When Fidel Ramos took his oath as the Philippines’ 12th President, he addressed Filipinos: “To this work of empowering the people, not only in their political rights but also in economic opportunities, I dedicate my presidency.”

Ramos, who succeeded Corazon Aquino, said “redemption is in our hands,” stressing that “today in the midst of our trials, we should learn how strong we can be–if only we stand together.”

A 2008 paper that was published by the World Bank said that since the restoration of democracy in 1986, the Philippines, from 1992 to 1998, “came closest to breaking out of its ‘sick man of Asia’ image.”

This was the reason that when Ramos, 94, died on Sunday (July 31), he was remembered as a “dedicated statesman,” with President Ferdinand “Bongbong” Marcos Jr. saying that the country “lost a great leader.”

A respected military official, Ramos was Ferdinand Marcos Sr.’s chief of the Philippine Constabulary and then vice chief-of-staff of the Armed Forces of the Philippines (AFP). He played a key role in bringing back democracy in 1986 when he and then defense chief Juan Ponce Enrile, broke away from the Marcos regime during the 1986 Edsa People Power Revolt.

Rodrigo Duterte, who was backed by Ramos in the 2016 presidential election, said: “As we grieve for his loss, let us honor his legacy of service and his significant contributions.”

Senate President Juan Miguel Zubiri said Ramos, who was often commended as the best economic manager, was one of the “brightest leaders” that the Philippines ever had, saying that he was always able to think of the best way forward.

A paper published by the International Monetary Fund (IMF) in 2000 said the Ramos presidency saw the Philippines “emerge” from slow growth and economic imbalances, and then managed to escape the 1997 financial crisis in Asia.

It stressed that economic growth bounced back in 1986 to 1989, however, it faltered in 1990 to 1991 because of the string of natural disasters, external shocks, and renewed political instability.

This, as the economy “deteriorated” in the 1980s—the last years of the Marcos dictatorship. The Philippines then saw its economy struggle with setbacks that left real per capita income at an all-time low. 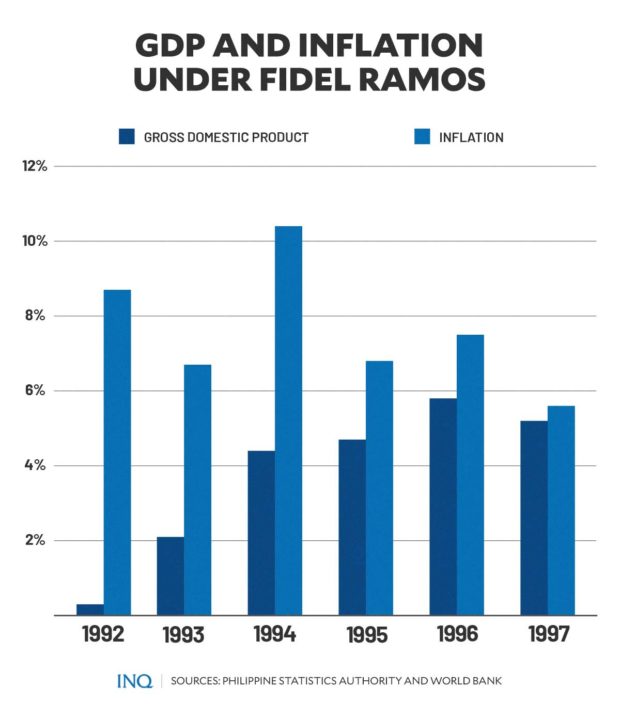 However, the 1990s have witnessed “impressive economic progress in the Philippines, reflecting sound economic policies in a more favorable external environment and greater political stability.”

The IMF said the Ramos presidency “embraced a comprehensive reform strategy aimed at further opening up the economy, reducing macroeconomic imbalances, and addressing other structural rigidities.”

It stressed that by 1996, growth had accelerated to almost six percent and the external position had strengthened, with rapid export growth and rising reserves.

Ramos’ vision, the World Bank said, had been to pursue reforms that would create a level playing field, which was seen as the key for competition to thrive and for the Philippines to be globally competitive and wealthy. 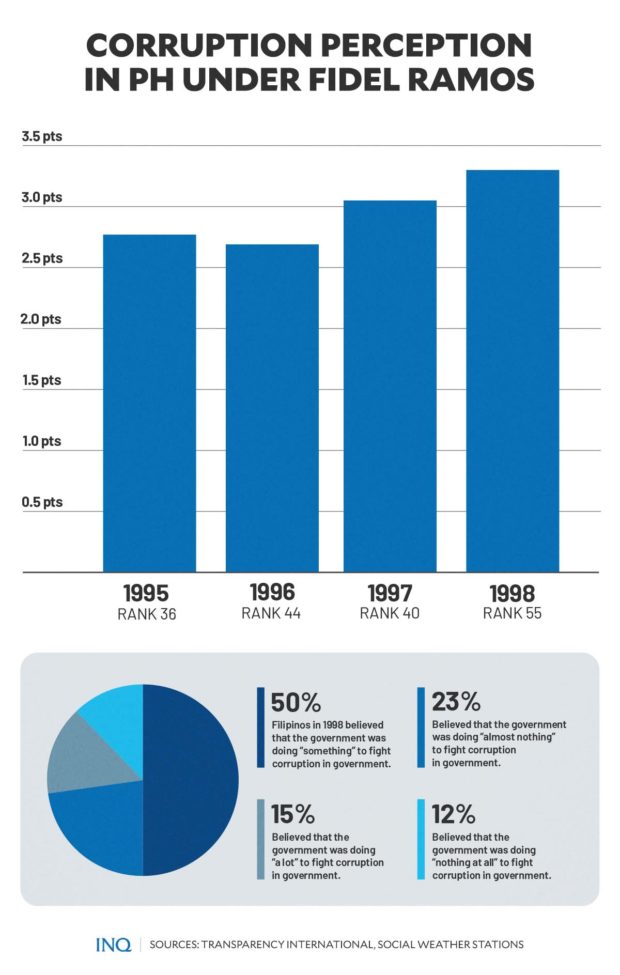 Ramos had declared in 1995 that the gross national product (GNP) grew by 5.5 percent, which the government considered as a signal that economic recovery was complete and that by 2000, the Philippines will become one of the “tiger economies” in Asia.

However, because of the 1997 financial crisis, by mid-1997, the peso had appreciated by more than 25 percent in real effective terms and the external account deficit had widened to more than five percent of the GNP.

“Large external borrowing in 1996, especially by banks, had raised foreign currency debt exposures […] Private sector credit had expanded rapidly during 1995 to 1996, including a significant rise in credit to real estate and consumption,” the IMF said.

The IMF said that while these developments had increased the risk to the economy, the Philippines became “less susceptible to a sudden downturn than most East Asian economies.”

The government, the IMF stressed, focused initially on stabilizing the economy through relatively tight monetary and fiscal policies. As stabilization took hold, the stance shifted gradually toward backing recovery.

It had a set of structural reforms to strengthen stabilization and medium-term growth prospects. Monetary policy had “lean[ed] against” pressures in the exchange market by increasing interest rates, without aggressively resisting market forces.

The World Bank said the confidence generated from local and international players and analysts resulted from wide-ranging reforms rooted primarily in a sound macroeconomic and investor-friendly regime as well as global competitiveness.

It was stressed by the IMF that reforms since the late 1980s, and intensified in the 1990s, have paid off, and are continuing to bear fruit with the help of skillful crisis management.

One of Ramos’ key promises was economic growth by getting the entire economy to generate productive employment, keeping in mind that for each Filipino, a job means not only material income—it is social usefulness and self-respect.

“We cannot dream of development while our homes and factories are in darkness. Nor can we exhort enterprise to effort as long as [the] government stands as a brake–and not as a spur–¬to progress,” he said.

However, to end poverty, he stressed that his administration will confront graft and corruption with actual results rather than words: “We will go after the bribe-takers and the bribe-givers. The bigger the target, the greater will be the government’s effort.”

Ramos signed in 1994 Executive Order No. 151 which established the Presidential Commission Against Graft and Corruption to investigate complaints involving graft and corruption.

This, as he stressed that “despite the existence of laws against graft and corruption, and the agencies legally and/or constitutionally mandated to enforce these laws, corruption remains prevalent and poses a very serious problem.”

He had said then that ending graft and corruption is imperative if the “Philippines 2000”—Ramos’ socio-economic program, which became one of his greatest legacies—is to be realized.

Transparency International’s Corruption Perception Index showed that the Philippines, from 1994 to 1998, had an average score of 2.69 to 3.3 out of 10, which was then the highest:

Social Weather Stations said in 1998 that 50 percent of Filipinos believed that the government was doing “something” to fight corruption in government; 15 percent said “a lot,” 23 percent said “almost nothing,” while 12 percent said “nothing at all.”

Ramos, in his 1992 inaugural address, said he will continue to reach out to all groups and factions making up the political community, saying that he will work with Congress for amnesty.

“Let us strive to make our political system fairer to all and more representative of the vastness and variety of our country. Let us all lay to rest our enmities and our conflicts, and this once join together in the reform and renewal of our society.” 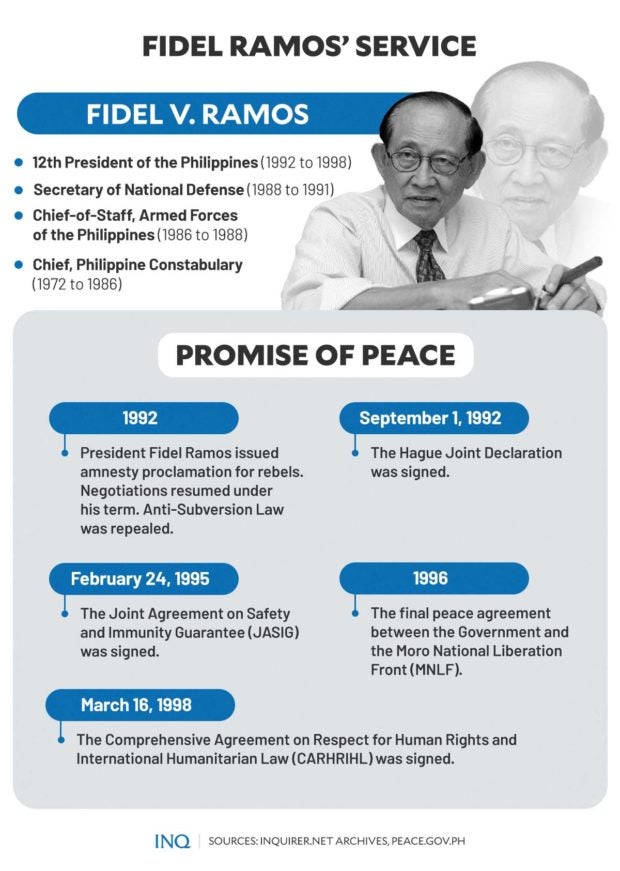 It was in his presidency that the government reached a peace agreement with the Moro National Liberation Front and conducted peace talks with the Communist Party of the Philippines-National Democratic Front-New People’s Army (CPP-NPA-NDF).

Ramos signed in 1992 the bill that repealed the Anti-Subversion Law. With the repeal, he legalized membership in the CPP, assuring them of political space. He said rebels can “compete under our constitutional system and free market of ideas, which are guaranteed by the rule of law.”

The repeal has resulted in agreements, like the Hague Joint Declaration and the Comprehensive Agreement on Respect for Human Rights and International Humanitarian Law.

In 1996, Ramos signed the final peace agreement between the government and the Moro National Liberation Front (MNLF)—a peace agreement that made Ramos and MNLF’s Nur Misuari win the 1997 Félix Houphouët-Boigny–UNESCO Peace Prize.