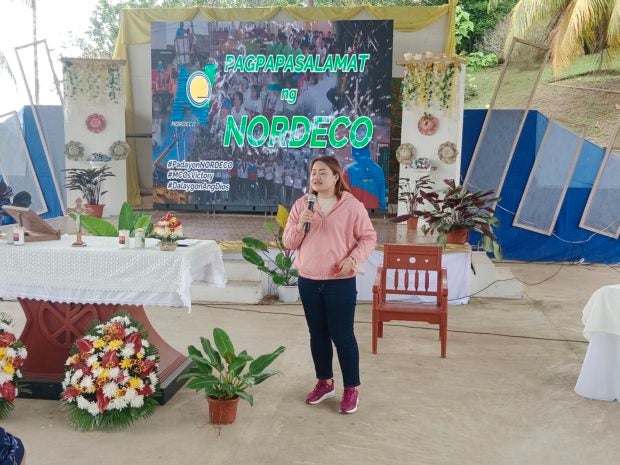 It is “well-informed and well-researched,” the officials said.

Lawyer Jeneene Dopay-Colingan, executive director and general manager of the Philippine Rural Electric Cooperatives Association (Philreca), issued the statement at a press conference in this city to laud the president’s decision to veto House Bill 10554.

Elvera Alngog, Nordeco general manager officer-in-charge, said the veto is “90-percent success and 10-percent challenge” since there were people inside their inner circle who may have worked against their struggle.

In Davao City, an official of the Mindanao Development Authority (MinDA) said Friday that the veto stayed true to the mandate of the Electric Power Industry Reform Act (Epira) of 2001, which opened the operation of power distribution and generation to as many players as possible in the country.

Although the veto might disappoint small consumers on Samal islands and Tagum City, who looked forward to more efficient service from DLPC, it would protect small cooperatives like Nordeco, said Assistant Secretary Romeo Montenegro, deputy executive director of MinDA.

“The statement of the Epira is broadening the ownership base of the power sector all over the Philippines to as many (players) in the power industry as possible because it used to be owned by only five families,” Montenegro said Friday before local government representatives.

He admitted that many residents in Tagum and Samal would be disappointed as DLPC, have fewer brownouts in its franchise areas, and charged lower rates of P9 per kilowatt-hour against Nordeco’s P11.

“That’s a very big difference in terms of monthly and annual electric consumption and payment,” Montenegro said. “So, if you look at [this] perspective, yes, the popular mood is for these areas (to want) to be served by Davao Light,” he added.

He explained that DLPC, the biggest contractor of cheap hydropower from the Agus-Pulangui hydropower complex, managed to keep its power rates lower than Nordeco, which maintains a fossil-based portfolio.

In a press statement, Nordeco said Marcos’ stand on the bill shows his commitment to total electrification program as mandated in Presidential Decree No. 269.

“His recognition of the existing franchise of Nordeco shows his utmost respect for the laws of the land,” the statement said.

In his veto message on July 27, Marcos said Nordeco had franchises in the same areas, which would last until 2028 and 2033.

Had the measure been signed into law, DLPC’s franchise would have covered Tagum City, Samal, and the towns of Talaingod, Asuncion, Kapalong, San Isidro, and New Corella, all in Davao del Norte province in the next 25 years.

“I am constrained to veto the bill due to the susceptibility of the proposed expansion of the franchise area of Davao Light and Power Company Inc. to legal and/or constitutional challenge due to the apparent overlap and possible infringement into the subsisting franchise, permits, and contracts previously granted to North Davao Electric Cooperative Inc.,” Marcos said. With a report from Germelina Lacorte, Inquirer Mindanao