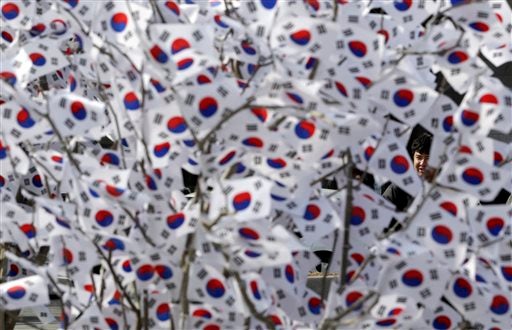 A man looks at South Korean national flags hanging on a tree to celebrate the upcoming March First Independence Movement Day, the anniversary of the 1919 uprising against Japanese colonial rule during a street campaign in Seoul, South Korea, Thursday, Feb. 26, 2015

SEOUL (Reuters) — South Korean parents and teachers groups protested on Monday against a plan to bring forward school enrollment by one year to age five, saying such young kids were intellectually unprepared and the change would increase difficulty in finding childcare.

The education ministry said last week it would lower the age in stages, beginning as early as 2025, if it gained consensus public support.

The plan was aimed at expanding the labor force by completing people’s education earlier, it said. The labor force is shrinking, because South Korea’s fertility rate is so low.

A coalition of 36 teachers and parents groups staged a rally in front of the presidential office on Monday, calling for the plan to be dropped.

Many parents have opposed it because of the difficulty of finding ways of looking after the children following the early-afternoon end of the school day. In most families, both parents work, and childcare centers generally offer only full-day care.

Parents already face the problem, but not until children go to school at age six.

The teachers’ objections are that five-year-olds are too young to go to school and that the earlier start for schooling will mean even more use of private tutoring as parents compete to get their children ahead.

“Considering cognitive and emotional development, early entry to school is inappropriate, and it is likely to cause side effects, such as intensifying private education and competition for college entrance exams,” the coalition said in a statement.

“It would only increase the burden on parents at a time when many are giving up their jobs to support their children as they enter elementary school.”

In 2019, children began education at age six in 26 of the 38 member countries of the Organization for Economic Cooperation and Development and at age five in three – Australia, New Zealand and Ireland.

The education ministry said it expected to have enough public feedback on its plan by the end of this year and would devise measures to expand childcare and other support before launching a pilot program.

A mother of two infants, who gave only her surname, Oh, said the government should help schools secure more teachers to better take care of children.

“This means schools would play a dual role of education and childcare,” she said.