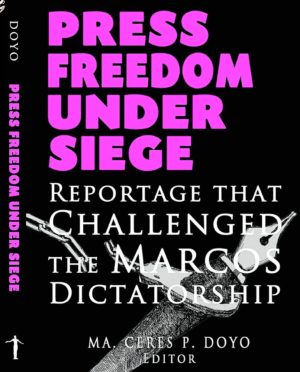 MANILA, Philippines — The National Book Development Board and the Manila Critics Circle announced in a virtual ceremony on July 30 the winners of the 39th National Book Awards (NBA) for books published in 2019 and 2020.

“Press Freedom Under Siege: Reportage that Challenged the Marcos Dictatorship” edited by Inquirer writer Ma. Ceres P. Doyo won as Best Book in Journalism. It was published by the University of the Philippines Press.

The book is a collection of articles written and published during the martial law era that had dire consequences for journalists, Doyo among them, who dared write about abuses and excesses under Marcos’ martial rule that lasted 14 years, from 1972 to 1986. It also includes caricatures, photos, transcripts of interrogations, and legal articles on press freedom.

The journalists faced multimillion libel suits, underwent military interrogations, were forced to resign, detained and experienced censorship, harassment, and surveillance. Several articles in the book were banned and did not see print in mainstream media.

There were four finalists in the journalism category.

The National Book Awards are given yearly but not in 2020 and 2021 because of the COVID-19 pandemic. The winning titles were chosen from 29 categories, among them, novel and poetry in Filipino and English, history, journalism, social sciences, food, art and drama.

In her acceptance spiel, Doyo said, “The stories in this book … were written during a dark and difficult period in our history. But the stories still cry out and resonate with our present national situation. May our young journalists derive inspiration from the authors and from the stories especially when they must speak truth to power.”

Journalist and NBA judge Marites Vitug said, “[This book] takes us back to the harrowing years of martial law, to the courage that shone brightly during the dark period in our history … [it is] a timely reminder for us all as, decades later, we witness history being whitewashed.”