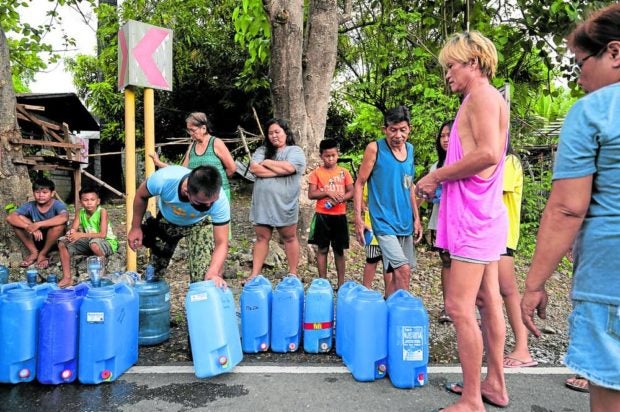 LACKING THE BASICS Residents affected by the July 27 earthquake in Bangued, Abra, wait in line for their water supply in this photo taken on Friday. —REUTERS

MANILA, Philippines — The number of families or individuals affected by the magnitude 7 earthquake that hit northern Luzon on Wednesday continued to pile up way beyond the initial figures on Thursday, when the tally of the National Disaster Risk Reduction and Management Council (NDRRMC) was only beginning to clarify the situation in the quake’s aftermath.

Most of the quake victims are from the directly affected regions of the Cordillera Administrative Region (CAR), Ilocos and Cagayan Valley.

The number of displaced persons grew to 33,383, compared with just 567 on Thursday.

Of the latest figure, only 6,176 have been sheltered in 46 evacuation centers, according to the council.

The death toll stood at 10, with the bodies of the last four fatalities recovered from the site of a landslide in Luba, Abra, the NDRMMC said on Friday.

The injured have more than doubled to 320 from Thursday’s figure of 131.

Damage to agriculture and irrigation infrastructure, mostly in the CAR, was pegged at P11.5 million, while the number of homes destroyed was now at 12,802, from 868 on Thursday.

The quake’s epicenter was located at about 3 kilometers west of the municipality of Tayum in Abra province.

The Social Security System (SSS) on Saturday said it will activate its calamity assistance package for members and pensioners in Abra and other areas in northern Luzon.

“The calamity assistance package will consist of the calamity loan assistance program and the three-month advance pension for pensioners,” SSS president and CEO Michael Regino said in a statement, which did not, however, disclose how much the agency would set aside.

Earlier on Friday, Government Service Insurance System president and general manager Wick Veloso said there are 5,733 members and 2,503 pensioners in Abra who may avail themselves of emergency loans.

But there were also no further details yet about that assistance.