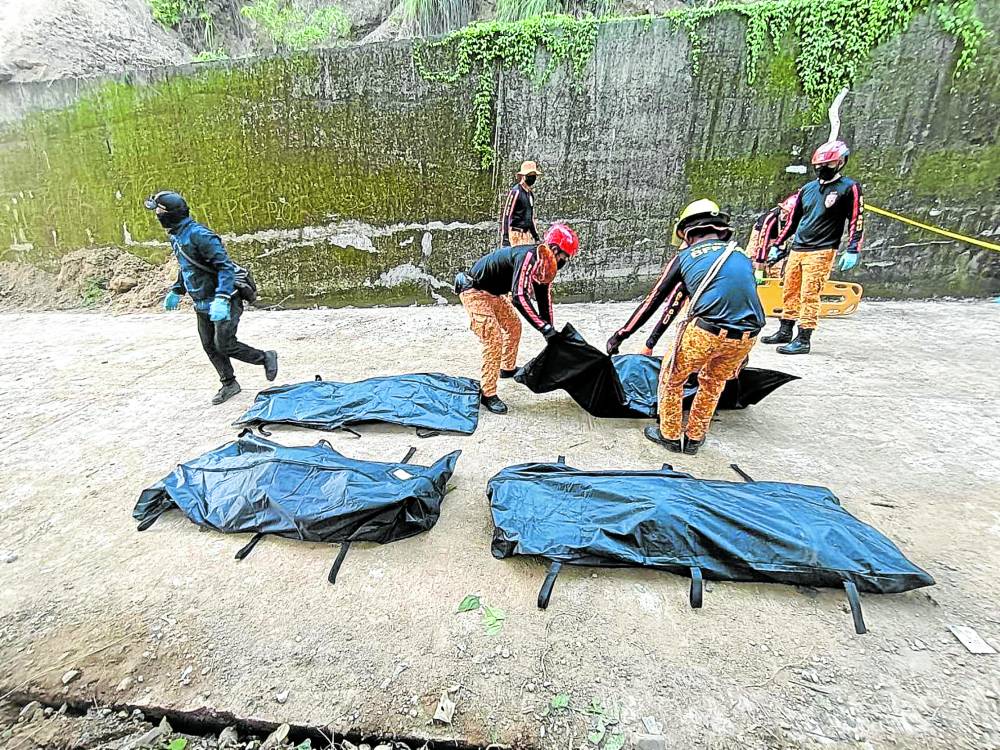 MORE CASUALTIES Four bodies, including that of two minors, are recovered on Friday from the site of a landslide at Sitio Bangel in Barangay Poblacion, Luba, Abra. The victims were reportedly traveling together in an improvised tricycle when the earthquake struck. —Photo from the Luba municipal disaster management office

BAGUIO CITY—Government workers and emergency responders struggled to bring aid to at least five towns and 13 villages in Abra and Kalinga provinces that were cut off from the rest of the country by the magnitude 7 earthquake in northern Luzon on Wednesday.

The death toll continued to rise on Friday afternoon with the discovery of four bodies buried in a landslide in Luba town in Abra. Initially reported missing, the victims were found in the rubble along Kayaddakad Road, authorities said.

Based on the official tally of the National Disaster Risk Reduction and Management Council (NDRRMC), as of Friday evening, the quake has claimed 10 lives with more than 130 others injured.

Two days after the temblor, villagers were still camping out in parks and open spaces in some areas, pleading for food and temporary shelter, and enduring aftershocks since the quake struck the Cordillera, Cagayan Valley and Ilocos regions.

Some road sections leading to the remote Abra towns of Boliney, Bucloc, Daguioman, Lacub and Malibcong were damaged and communication lines in these places were still down, according to the provincial disaster risk reduction and management office (PDRRMO).

The PDRRMO said five subvillages in Sallapadan also could not be immediately reached by teams distributing food and relief items.

“Most of these places have no electricity and have poor communication signals. There are currently no passable roads we can use [to reach them],” Cathy Mann, the PDRRMO first responder, told the Inquirer by phone on Friday.

In a separate phone interview, Daniel Cayabo, 50, Tuquib village chair in Villaviciosa, said a mountain near his barangay had eroded, preventing emergency responders from reaching them. Tuquib is 36 kilometers from the capital town of Bangued.

He said the intense ground shaking had damaged water lines, forcing the villagers to collect water from a spring for their household use.

“We’re buying drinking water from stores that are still open because we cannot drink from the spring. Drinking water is already becoming scarce,” he said.

Cayabo worried that the barangay would run out of food supplies for 278 families soon. “We need food that can easily be prepared since it’s more convenient for families who are camping outside their homes,” he said.

The military on Friday said it airlifted supplies to seven isolated towns in Abra.

Some 3,000 food packs were delivered by helicopter to the communities, a spokesperson for the Department of Social Welfare and Development (DSWD) told dzMM radio.

In Kalinga province, the villages of Lower Uma, Upper Uma, Western Uma, and Tanglag in Lubuagan town were also isolated after quake-induced landslides and rock slides blocked the roads leading to them.

Relief on the way

On Thursday, Lubuagan Mayor Joel Tagaotao said clearing operations were under way to allow relief goods to reach the villages with a population of 536. Lubuagan is a neighboring town of Abra’s Lagangilang town, the epicenter of the earthquake.

They were riding a “kalalaw,” or an improvised tricycle, when the temblor hit, triggering a landslide that engulfed the group, according to their relatives.

The NDRRMC has accounted for six other quake-related deaths, but the last case, reported in Ilocos Region, is still being validated.

The five other fatalities verified by the agency were all from the Cordillera Administrative Region (CAR) and identified as Jonalyn Sigganay, 23, of Bangued, Abra; Aron Cul-iteng, 25, of La Trinidad, Benguet; Resty Tabas, 31, of Tuba, Benguet; Jefferson Basar, 24, of Balbalan, Kalinga; and Andres Sagayo, 59, of Bauko, Mountain Province. The NDRRMC also tallied 136 injured persons in Ilocos, Cagayan Valley and the CAR.

About 7,300 persons were displaced by the earthquake, of whom more than 5,800 were staying in evacuation centers.

Agricultural losses stood at P3.8 million while infrastructure damage was at P396 million, according to Mark Timbal, the NDRRMC spokesperson.

The official said damage to roads was estimated at P104 million, and bridges at P292 million.

Some 1,400 houses were damaged per the NDRRMC’s tally, but an estimate from the DSWD suggested the actual number could be closer to 4,000.

In Mountain Province, the tremor almost killed a team of chefs and tourist guides traveling in two vans on Wednesday, said Jovita Ganongan, director of the Department of Tourism in the CAR.

A rumbling sound gave the drivers enough warning to stop before massive boulders rolled down the highway near Bauko town, said Harley Palangchao, editor of Baguio Midland Courier, who managed to take dramatic photos of the rockslide.

“You can’t mistake that sound. So I alerted the driver of our front vehicle. A few meters more and they would have been buried,” he told the Inquirer. —WITH REPORTS FROM REUTERS, DEXTER CABALZA, NESTOR CORRALES, VINCENT CABREZA, VILLAMOR VISAYA JR. AND JOHN MICHAEL MUGAS