As U.S. defends Ukraine at U.N., China warns against challenge over Taiwan 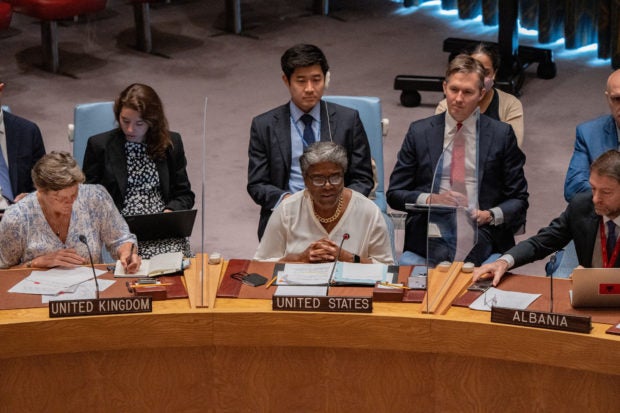 United States Ambassador to the United Nations, Linda Thomas-Greenfield reads a statement during a meeting of the United Nations Security Council about the maintenance of peace and security of Ukraine, at the U.N. headquarters in New York City, U.S., July 29, 2022. (REUTERS)

UNITED NATIONS  – China accused the United States of double standards at the United Nations on Friday for challenging Beijing’s sovereignty over Taiwan while emphasizing the principle of sovereignty for Ukraine after Russian forces invaded.

A day after Chinese leader Xi Jinping warned U.S. President Joe Biden in a phone call against playing with fire over Taiwan, deputy U.N. Ambassador Geng Shuang reinforced the message during a meeting on Ukraine at the 15-member U.N. Security Council.

“While some country has repeatedly emphasized the principle of sovereignty over the issue of Ukraine, it has incessantly challenged the sovereignty of China over Taiwan, and even deliberately created tension in the Taiwan Strait,” Geng said, a clear reference to the United States without naming it.

Russia describes its Feb. 24 invasion of neighboring Ukraine as a “special military operation” to root out dangerous nationalists, but Kyiv and the West say it is an unprovoked war of aggression.

The determination of China to defend its national sovereignty and territorial integrity should not be underestimated, Geng said. “I hope the country concerned will see this clearly and not play with fire.”

Beijing is concerned about a possible visit to the Chinese-claimed island of Taiwan by U.S. House of Representatives Speaker Nancy Pelosi. Such a visit would be a dramatic, though not unprecedented, show of U.S. support for Taiwan.

A spokesperson for the U.S. mission to the United Nations dismissed China’s comment as “an attempt to distract and deflect blame from the reality: that Russia’s aggression against Ukraine is unacceptable under any circumstance.”

“China’s failure to highlight Russia’s role as the clear aggressor in its conflict with Ukraine call into question its commitment to the principles of sovereignty and territorial integrity,” the spokesperson said.

Geng told the council China had always maintained that all countries sovereignty and territorial integrity should be respected and legitimate security concerns be taken seriously.

The U.S. mission to the United Nations spokesperson said China’s “misleading” argument that Russia has “legitimate” security concerns “appears to justify aggression by larger powers against smaller ones rather than a genuine commitment to peaceful resolution of disputes.”

U.S. Ambassador to the United Nations, Linda Thomas-Greenfield, who addressed the council before Geng’s speech, said Russia had “effectively set the U.N. Charter on fire.” The charter says the 193-member world body is based on the principle of the sovereign equality of all members and they should settle international disputes by peaceful means.

“There should no longer be any doubt, as we warned early this year, that Russia intends to dismantle Ukraine as a geopolitical entity and dissolve it from the world map entirely,” Thomas-Greenfield said.

“The de-Nazification and demilitarization of Ukraine will be carried out in full,” Polyanskiy said, using Moscow’s official language to describe the invasion. “There must no longer be a threat from this state to Donbas (border region of Ukraine) nor to Russia nor to the liberated Ukrainian territories.”