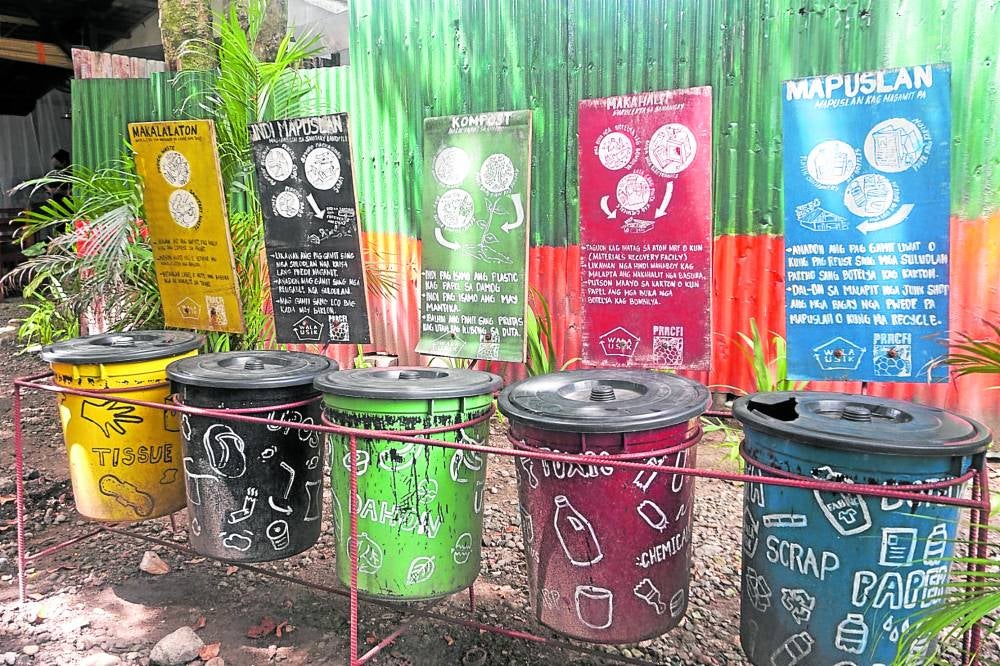 REDUCING WASTE ‘IN OUR OWN WAY’ An establishment, Timplada Restaurant in Barangay 1, has a segregation system  that follows a waste program being pursued by a group monitoring garbage disposal and other environmental concerns in the whole of Negros Island. —PHOTO BY MARIEJO S. RAMOS

BACOLOD CITY—It is easy to spot Lilian Gordoncillo’s cafe, with its paintings of waves and whales on bright blue walls that catch the eyes of passersby.

Her adopted home in Purok Nami-nami, Barangay Banago, is a high-density community like many other areas in this coastal capital of Negros Occidental province.

The 55-year-old Gordoncillo, a native of Zamboanga del Norte, married a Negrense and settled here. She used to run a sari-sari store, but now manages a small “kapehan,” or coffee shop, frequented by truck drivers at the harbor named after the barangay.

Having lived here long enough, she has observed a major problem in the community: Residents would often throw used plastic bags and other trash on the streets, which have caused clogged drainages and flooding.

In 2018, more than 1,200 volunteers of the Philippine Reef and Rainforest Conservation Foundation Inc. (PRRCFI)—a group focused on biodiversity conservation and sustainable development in the whole of Negros Island—conducted 16 coastal cleanups in three cities and five municipalities.

PRRCFI also did a waste audit, or a study and classification of the garbage collected, of more than 3 metric tons of trash.

These endeavors were carried out under the foundation’s Sea Waste Education to Eradicate Plastic (Sweep) program.

The audit results showed that plastic packaging for processed food, including thin plastics for ice and condiments, made up most of the trash collected in coastal cleanups.

In Banago, where Gordoncillo took part in the cleanup drive, the biggest chunk of waste collected—33 percent—were plastic bags commonly used in buying household items such as rice and vegetables from sari-sari stores.

“I thought, why is waste management not a big deal in our community? Although we have waste segregation policies, they are not addressing the source of the problem,” she said.

“Wala usik,” or “nothing wasted,” in the local language, Hiligaynon, is a familiar phrase to communities that have been involved in PRRCFI’s Sweep program, and it refers to a grassroots-based effort to reduce single-use plastic waste in Negros.

The foundation also expressed concern about the local and global trends of fish decline, amid increasing plastic pollution in the world’s oceans. According to the most dire forecast of that trend, there may be more plastic than fish in the sea by 2050.

Environmentalists warn that the current data already affirms that projection. In the Philippines, mismanaged plastic waste threatens the country’s ecology and economy, PRRCFI said, as it noted that 80 percent of plastic waste come from plastics used in “fast-moving consumer goods” such as toiletries, beverages and processed food.

Furthermore, at least 74,000 microplastic particles are ingested every year from the air people breathe, the water they drink and the food they eat, according to global movement Break Free from Plastic.

This situation has prompted the campaign here and abroad against the use of plastics to be more innovative in its approaches.

In Negros, the foundation’s Sweep program, in partnership with US-led development agency US Agency for International Development (USAID), helped Gordoncillo and seven others to put up community-based “wala usik” sari-sari stores in the cities of Bacolod and Sipalay and the municipalities of Cauayan, Hinoba-an and Sta. Catalina in Negros Occidental; and in the city of Bayawan and the municipalities of Basay and Siaton in Negros Oriental.

Sari-sari stores have contributed to the proliferation of single-use plastic packages that go with many of their items. This led PRRCFI to do a bit of problem solving: Could those products be sold without their wrappings?

Gordoncillo’s solution was to sell her products using dispensers and reusable containers. She said she was able to sell rice, coffee, condiments, detergent and other items with those implements.

She also collected used straws on the streets, sanitizing them and turning them into mats or pillow fillings “kesa magkalat lang sa kalsada (instead of leaving them littered on the streets),” she said.

Princess Bala-an, project manager of Sweep program’s Wala Usik Economy component, said: “We put up Sweep stores in communities to show that it is the people who should call out the government on waste management and express their needs.”

Storekeepers said their neighbors were initially open to the “wala usik” concept and were eager to try it.But this initial enthusiasm soon gave way to old habits, as some customers became tired of having to sterilize and return the refillable containers lent to them for their purchases, or they would go back to buying the popular brands with single-use plastics.

These “wala usik” stores persisted for as long as they could—until the COVID-19 pandemic forced them to close. The foundation estimated that the stores were able to prevent 45,000 pieces of plastic sachet waste from entering the ocean.

“We couldn’t [keep these stores] obligated to the model of zero waste, especially if they’re economically in crisis. And we also have to revisit our messaging on plastic use when, during the pandemic, people were dependent on it,” said Dave Albao, PRRCFI executive director.Gordoncillo said: “[W]e had to close [the stores because] no one buys from us, because people have no money to buy our goods, considering our environment here—many are living hand to mouth.”

But she said: “As soon as I’m financially capable again, I will revive my ‘wala usik’ store. Even if we won’t be able to totally eradicate plastic waste, at least, in our own way, we can reduce them.”

But the small “wala usik” initiative had also eventually inspired restaurants, coffee shops and other establishments to adopt that idea.

“Building on the sari-sari store experience, we continue[d] our work with [other] stores, some of them … carinderia (eateries), while we [used what we learned] into a technical implementing framework or a ‘wala usik’ guide for zero-waste models,” Albao said.

But these efforts also need the government’s support, said Aisel Moyani, herself a public official who heads the Green Business Development Sector of the Department of Trade and Industry office in Negros Occidental.

“With the green business development framework, we [guide the businesses on] how to limit their carbon emissions, carbon footprint, and then reducing environmental risks. We start with small steps,” she said.

Yet even as that approach helps change “cultural behaviors,” she also noted that “we still have issues [to resolve] with solid waste management[.] It pays to see the bigger picture first: Where are we coming from and where do we [get] in?” INQ

Reporting for this story was supported by Internews’ Earth Journalism Network.