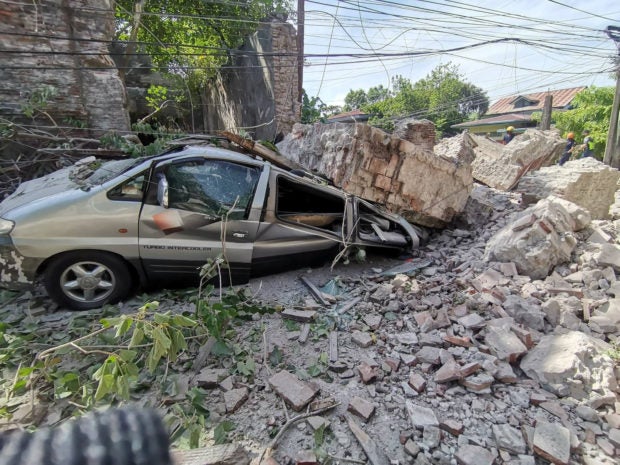 A general view of damage caused following an earthquake in Vigan, Philippines, on July 27, 2022. Public Information Service-Bureau of Fire Protection/Handout via REUTERS

TACLOBAN CITY — The country’s league of provinces has decided to extend financial assistance to victims of the strong earthquake that recently struck the Luzon region.

Eastern Samar Gov. Ben Evardone made a motion during their meeting on Thursday, July 28, requesting all provinces spared by the recent tremor to set aside at least P100,000 to be donated to the provinces hit by the calamity.

“On my motion, the league of provinces today (July 28) during our general assembly adopted a resolution stating that all non-affected provinces will donate at least P100,000 each for the affected provinces,” he said in a message to the Inquirer.

He also said that provinces that can afford it can give bigger financial assistance to the quake-hit provinces of Abra, Ilocos Sur, and Benguet.

Evardone said the P100,000 he would extend to the provinces battered by the quake would be taken from their calamity fund.

The 7.0 tremor which hit the three provinces on Wednesday morning has resulted in the death of six persons and affected some 19,486 families, said the National Disaster Risk Reduction and Management Council on Friday.

The powerful earthquake was also felt in other parts of Luzon, including Metro Manila.