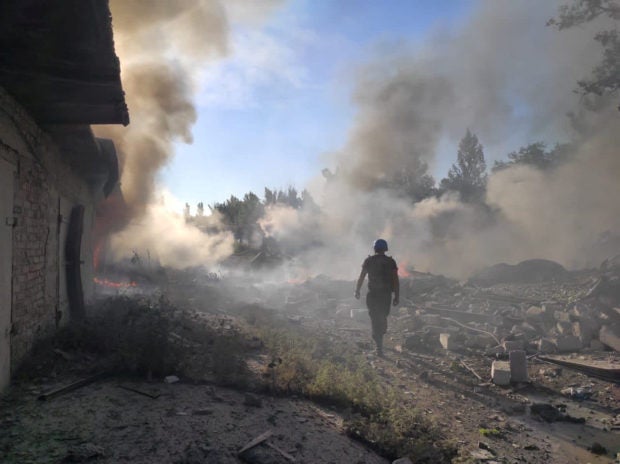 A rescuer walks among debris at a site of a residential area destroyed by a Russian military strike, as Russia’s attack on Ukraine continues, in the town of Toretsk, Donetsk region, Ukraine July 27, 2022. (Press service of the State Emergency Service of Ukraine/Handout via REUTERS)

KYIV  – Ukraine stepped up its drive to retake its Russian-controlled south by trying to bomb and isolate Russian troops in hard-to-resupply areas, but it said on Thursday it saw evidence that Moscow was redeploying its forces to defend the territory.

“We will not give up. We will not be intimidated. Ukraine is an independent, free, indivisible state. And it will always be so,” he wrote on Telegram.

After Russia and Ukraine struck a deal last week to unblock grain exports from Black Sea ports, U.N. aid chief Martin Griffiths said he was hopeful the first shipment of grain from a Ukrainian Black Sea port could take place as early as Friday.

He said “crucial” details for the safe passage of vessels were still being worked out, however, adding that “the devil was in the details”.

Allowing safe passage for grain shipments from Ukrainian ports should ease shortages that have left tens of millions of people around the world facing soaring food prices and hunger.

Ukraine said on Thursday its planes had struck five Russian strongholds around the city of Kherson and another nearby city.

The southern Kherson region, which borders Russian-annexed Crimea, fell to Russian forces soon after they began what Moscow calls “a special military operation” on Feb. 24. Ukraine describes Russia’s actions as an imperial-style war of conquest.

British military intelligence, which helps Ukraine, said it was likely that Ukrainian forces had also established a bridgehead south of a river which runs along the region’s northern border. “Ukraine’s counter-offensive in Kherson is gathering momentum,” it said in a statement.

Ukraine says it has retaken some small settlements on the region’s northern edge in recent weeks as it tries to push Russian forces back, a potential prelude to what Kyiv has billed as a major counter-offensive to retake the south.

Russia said on Thursday it was unfazed, with the defence ministry saying its planes had attacked a Ukrainian infantry brigade in the far north of Kherson region and killed more than 130 of its soldiers in the last 24 hours.

Kirill Stremousov, the deputy head of the Russian-appointed military-civilian administration running the Kherson region, has also dismissed Western and Ukrainian assessments of the battlefield situation.

Ukraine has used Western-supplied long-range missile systems to badly damage three bridges across the River Dnipro in recent weeks, making it harder for Russia to supply its forces on the western bank.

British intelligence said the strategy was starting to isolate Russian forces in the Kherson region.

“Russia’s 49th Army, stationed on the west bank of the Dnipro River, now looks highly vulnerable,” it said in an intelligence bulletin.

Kherson city was now virtually cut off from the other territories occupied by Russia.

“Its loss would severely undermine Russia’s attempts to paint the occupation as a success,” British intelligence said.

A Ukrainian strike on Wednesday on the Antonivskyi bridge, the sole span serving Kherson city, prompted its closure to traffic. That forced Russia to open a ferry service, the route of which it said would constantly change for security reasons.

Oleksiy Danilov, secretary of Ukraine’s National Security and Defence Council, tweeted that Russia was concentrating “the maximum number of troops” in the direction of the Kherson region but gave no details.

Oleksiy Arestovych, an adviser to President Zelenskiy, said Russia was conducting a “massive redeployment” of forces from the east to the south in what amounted to a strategic shift from attack to defence.

RIA reported on Thursday that Russian security services had uncovered a group of Ukrainian agents in Kherson who had been paid to pass on the map coordinates of Russian forces there to Ukraine for targeting with artillery.

Oleksiy Gromov, a senior member of the Ukraine military’s General Staff, told a news briefing the Antonivskyi bridge was of great importance for Russia’s defensive effort and for Ukraine’s attempted offensive.

“We have repeatedly struck the Antonivskyi bridge … There is significant damage to the bridge’s structures,” Gromov said.

Russia continues to carry out its own daily strikes against targets across Ukraine.

Five people were killed and 25 wounded in a Russian missile strike on a flight school in the central Ukrainian city of Kropyvnytskyi on Thursday, the regional governor said.

Fierce fighting is also underway in eastern Ukraine where Russia is trying to take control of the entirety of the industrialised Donbas region.

Ukraine confirmed late on Wednesday that Russian forces had captured the Soviet-era coal-fired Vuhlehirsk power plant, Ukraine’s second-largest, in what was Moscow’s first significant gain in Donbas in more than three weeks. Kyiv played down the importance of the setback.

Read Next
Remulla tells NBI to stop ‘operating’ vs Pogos, cites extortion reports
EDITORS' PICK
House energy committee chair Arroyo bats for cheap electricity
Reignite your passion with the vivo Y35
Individuals affected by ‘Karding’ now over 157,000
Karding damage to infrastructure at P23M
Bongbong Marcos says PH ‘open for business’ with new Clark Airport terminal
Newbie gamers are in for a treat with the power-packed feature of vivo Y16
MOST READ
LPA enters PAR, may develop into tropical depression
Angelica Panganiban ‘duguan, sugatang mom’ one week into breastfeeding
Security guard shoots 2 other guards dead inside Makati subdivision
Badoy not with Office of the President, NTF-Elcac, under Marcos admin — solon
Don't miss out on the latest news and information.