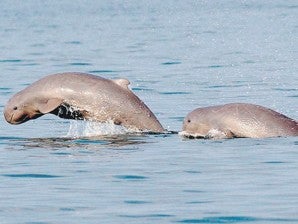 ENDANGERED Two Irrawaddy dolphins frolic in the waters of Malampaya Sound in northwest Palawan, one of only two areas in the country where the critically endangered sea mammals are found, in this photo taken in 2006. The Tagbanua tribe has helped save the creatures from extinction. (See story below.) PHOTO COURTESY OF MAVIC MATILLANO/WORLD WIDE FUND FOR NATURE

The Tagbanua people may be obscure and small, but their indigenous practices could pull Irrawaddy dolphins in Malampaya Sound in Palawan back from the brink of extinction.

Over the years, destructive fishing practices have depleted the population of Irrawaddy dolphins (Orcaella brevirostris) in the waters of northwest Palawan, according to a study by the Philippine chapter of the World Wide Fund for Nature (WWF).

The population of the marine mammals in Malampaya Sound, one of two areas in the country where they are found, has plummeted to 42 from 77 in 2001, according to the environmental group. The other habitat is in Central Visayas.

Joel Palma, a WWF conservationist, said up to seven dolphins were dying every year, tangled up in fishing nets and traps used by fishermen in Malampaya Sound, an ecologically rich region that has coral reefs, sea grass beds, mangroves and lowland forests.

The International Union for Conservation of Nature and Natural Resources has classified the Irrawaddy dolphins as critically endangered—the highest risk category for any animal species.

There are only about 6,000 Irrawaddy dolphins left worldwide, the WWF said. It would be nearly impossible to replenish their population in Malampaya Sound if the number drops below 40.

The WFF has called for a change in fishing practices and urged local communities to follow the sustainable fishing methods of the Tagbanua.

The tribe’s fishing practices have shown “how people can steward nature without destroying it,” the group said. Not only would this help curb dolphin deaths but it would also preserve the ecosystem of the resource-rich waters.

“Everything is interlinked— the survival of the Irrawaddy dolphins and the conservation of Malampaya Sound are dependent on the economy and the culture of its own stewards,” Palma said.

“Dolphins are top-tier predators and their presence indicates the soaring health of local marine ecosystems. Should the dolphins be pushed into extinction, Malampaya Sound’s rich fishing industry might crash as well,” he added.

Raoul Cola, who studied the indigenous practices of the Tagbanua for the WWF in his book “Conserving Nature As Lifeways,” which was published last week, said the tribe conserved marine resources using extraction schedule and selective harvesting.

The Tagbanua people catch certain fish species based on the position of the moon or the tide. They also share their catch among neighbors and relatives, avoiding wastage and overfishing.

Their methods do not have a heavy impact on the environment and provide time for resource restoration, Cola said.

The Tagbanuas show the important role that indigenous peoples play in the protection of the threatened but highly biodiverse areas they call home.

Mavic Matillano, who was in charge of the Irrawaddy study completed in 2007, said the tribe’s sustainable practices were rooted in its belief that nature must be respected.

In the Tagbanua mythical belief system, for instance, dolphins are messengers of the deity and should not be caught.

“For them, the dolphins are bearer of good tidings and are also the omen of something bad that will happen like typhoons or calamities, depending on the behavior of the animal,” Matillano said.

“That, in a way made the lumad [non-Muslim indigenous peoples in Mindanao] also believe that when you hurt a dolphin, something bad may happen to you,” she added.

But as time went on and migrants settled in the sound, the Tagbanua’s indigenous practices were replaced by modern fishing methods that rapidly depleted resources.

Migrant fishermen use longline traps and fishing nets which they leave overnight to catch crabs and fishes, the WWF said.

Because the traps and nets are underwater and are difficult to detect by echolocation, the dolphins find themselves trapped in the lines and unable to surface for air.

“The dolphins could not breathe so they drowned,” Palma said.

Dolphins are not the only species whose populations have declined.

“Although the Sound was long recognized as a fish basket of the country, its production noticeably decreased. It cannot keep up with the market-driven harvesting of the settlers and commercial fishers,” Cola said in his study.

WWF officials said the most important thing to do right now was to change the fishing practices of the coastal communities there. The group and Cola pointed to the Tagbanua fishing practices as a model of sustainable practice.

The WWF has urged the communities to switch to individual traps and safe fishing gear.

Palma said the change had led to a dramatic decrease in mortality rates, with only one or two dolphin casualties in a year.

Instead of a market-driven harvesting, fishermen in Malampaya Sound are urged to share and schedule their marine harvest.

Cola also advocated the use of simple technologies that do not disrupt the ecosystem and the establishment of no-touch zones.

“Based on the principle of the interconnection, not only of ecosystems but also of the natural, social and spiritual worlds, these strategies demonstrate that the world view of the users molds their environment and defines the prospect of its sustainability,” he said.

The WWF said hewing closely to the Tagbanua practices was just one step in preserving the dolphin population in Malampaya Sound.

The WWF communications manager, Gregg Yan, noted that no private or public body was investing in the conservation of Irrawaddy dolphins in the Philippines.

“We urgently need a localized species-conservation strategy for these beleaguered dolphins. To effectively implement this plan, the WWF needs to coordinate closely with the DENR (Department of Environment and Natural Resources), BFAR (Bureau of Fisheries and Aquatic Resources), LGUs (local government units) and other stakeholders,” he said.

“But the first step is to find a funder,” Yan said.

He said immediate action was necessary to secure the future of this population. “Otherwise, the population will become so small that conservation efforts are effectively futile.”