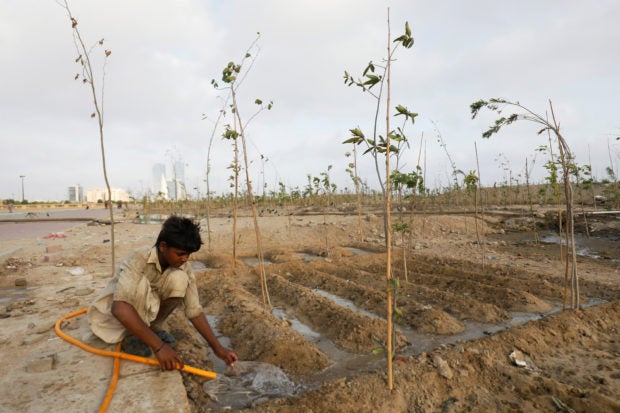 KARACHI — Mulazim Hussain is proud of the trees he has planted.

Surrounded by neem saplings and vegetables sprouting up from scrubland in the Clifton district of Pakistan’s largest city Karachi, the 61-year-old recalls a time a few years ago when the area was a giant, informal rubbish tip.

“Now there is greenery and happiness, children come in the evening to play, people come to walk,” he said, speaking near a patch of trees amid a barren expanse bordered by the sea on one side and tower blocks and offices in the distance on the other.

“I have raised these plants like my children over the last four years,” he added, taking a break from his labours amid a fierce summer heatwave.

Wearing a white and brown scarf around his head and a loose, cream-coloured shirt, Hussain collected dry grass from the ground and watered his cherished trees during a recent visit by Reuters reporters to the urban forest plantation project. 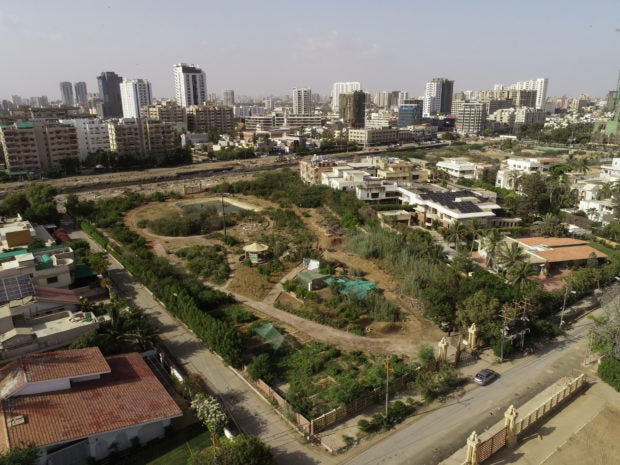 An aerial view shows the urban forest with the business district in the background in Karachi, Pakistan June 6, 2021. REUTERS

At the end of the day, he turned the hose on himself to cool off and clean up before heading home on his motorcycle.

The father of two is employed by an urban afforestation project in a government-owned park in Karachi’s upmarket Clifton area that is run by Shahzad Qureshi, who has worked on similar projects in other Pakistani cities and overseas.

It is one of dozens of state-owned and private planting initiatives in Pakistan, where forest cover lags far behind average levels across South Asia. Trees absorb carbon dioxide, emissions of which contribute to warming global temperatures.

The aim in Clifton is to counterbalance rapid urbanisation in Karachi, a sprawling port city of some 17 million people where breakneck expansion of roads and buildings means there is less and less space for trees and parkland. 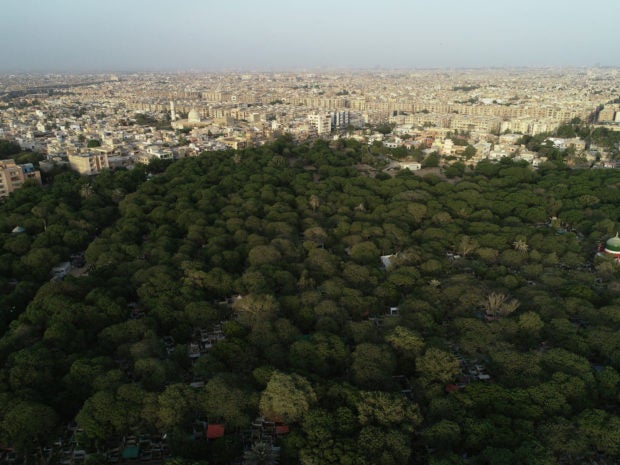 An aerial view shows a green patch of Azadirachta Indica trees over a graveyard with the city in the background in Karachi, Pakistan June 6, 2021. REUTERS

Qureshi wanted to provide shade for residents seeking escape from rising temperatures – a heatwave in 2015 killed more than 400 people in the city in three days, and temperatures in the surrounding Sindh region reached record highs this year.

“The bigger the tree cover of the city the more the cooling, with a difference of up to 10 (degrees) Celsius when you are surrounded by trees,” he told Reuters, adding that the project only used native species.

“As you plant … it attracts insects, and varieties of birds start coming. Presently mongoose are roaming around in the park, and four or five varieties of chameleon. 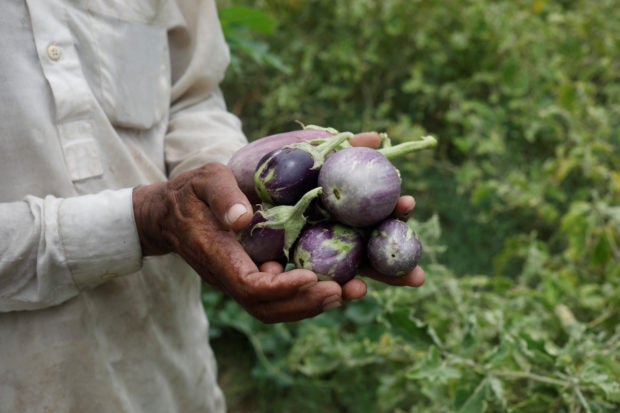 Mulazim Hussain, 61, a farmer at the urban forest plantation project, holds aubergines at the Clifton Urban Forest project in Karachi, Pakistan July 2, 2022. “I have raised these plants like my children over the last four years,” he said. REUTERS

Overall forest cover in Pakistan, home to more than 220 million people, is around 5.4%, according to Syed Kamran Hussain, manager for the Khyber Pakhtunkhwa province at the World Wide Fund for Nature’s national branch.

That compares with 24% in neighboring India and 14.5% in Bangladesh, and the previous government announced a mass forestation programme that envisaged planting 10 billion trees between 2019 and 2023.

“Pakistan is among the top 10 most vulnerable countries affected by global warming,” Hussain said. “After oceans, trees are the second largest sink of carbon.” 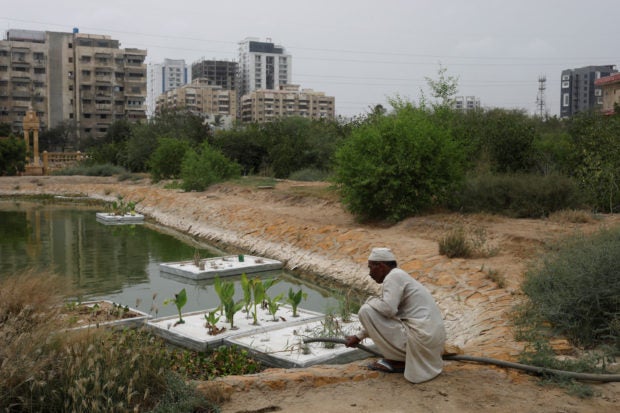 Mulazim Hussain, 61, a farmer at the urban forest plantation project, waters plants near the reservoir at the Clifton Urban Forest project in Karachi, Pakistan July 2, 2022. “I have raised these plants like my children over the last four years,” he said. REUTERS

Some climate change experts question the impact of afforestation projects – the planting of trees where there were none before – in urban settings.

The choice of species is important, because it affects the amount saplings may need to be watered – a major factor in Pakistan where water is generally scarce.

And whether to plant trees at all is not a simple question: the benefits are not always clear and significant investment is needed to nurture saplings into fully grown trees.

“What is missing from urban forestry is a holistic approach to the environment,” said Usman Ashraf, a doctoral researcher in development studies at the University of Helsinki. He was not commenting specifically on the Karachi project.

“It’s about visual success, the numbers, small patches here and there,” he said. “It won’t even make a dent on any of the environmental harm in these cities.” 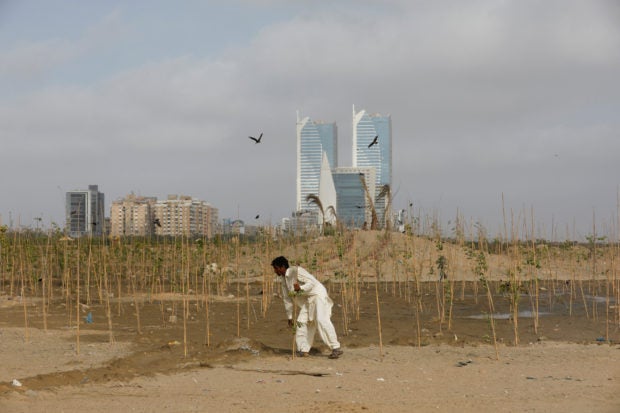 Lakshman, 40, pushes a stick used to support a seedling, as he works at Clifton Urban Forest, previously a garbage dumping site in Karachi, Pakistan May 26, 2021. Karachi is a sprawling port city of some 17 million people, where breakneck expansion of roads and buildings means there is less and less space for trees and parkland. REUTERS

Masood Lohar, who founded the Clifton Urban Forest that has planted trees on the beach front not far from Qureshi’s project, said afforestation could help make Karachi more resilient against natural disasters and encourage wildlife to settle.

Experts say it can also provide relief from heatwaves, with the sea breeze getting hotter as it passes through concrete structures while roadways and rooftops absorb heat. Where to plant is a key question, with wealthier urban areas often better off in terms of tree cover.

In the absence of more trees, “we are turning the city into hell”, Lohar said.

In the Sakhi Hassan Graveyard in the centre of the city, small saplings grow among uneven tombstones crammed close together, while larger trees offer shade from the midday sun. 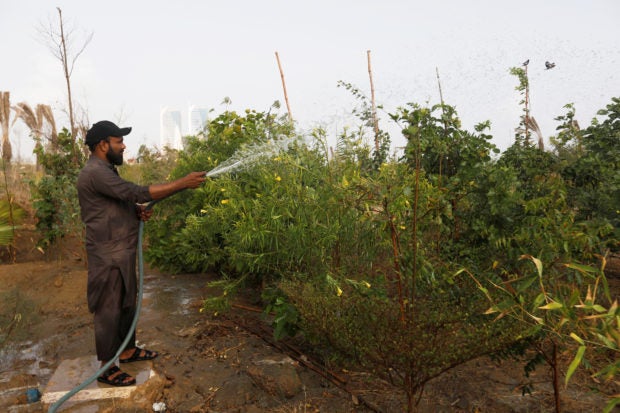 A worker waters the Clifton Urban Forest plantation, previously a garbage dumping site in Karachi, Pakistan June 29, 2022. Karachi is a sprawling port city of some 17 million people, where breakneck expansion of roads and buildings means there is less and less space for trees and parkland. REUTERS

Mohammad Jahangir, 35, is a caretaker there who waters the plants for a small cash donation from relatives who seeded them. Viewed from above, the graveyard is a sea of green that stands out against a low-rise neighbourhood.

“We don’t feel the heat here in the graveyard, while the city sizzles,” said Jahangir. “These trees are a blessing.”