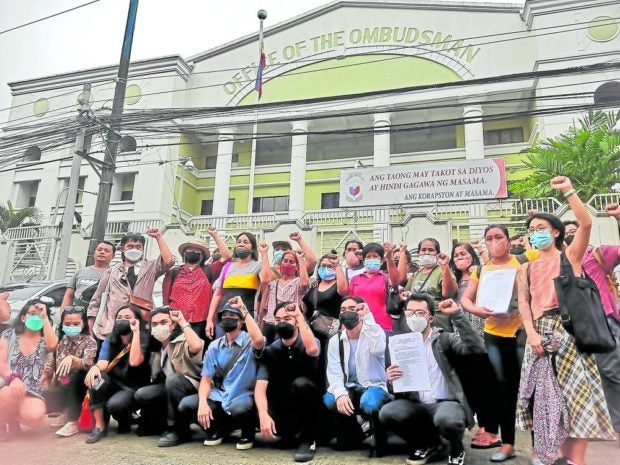 LEGAL FIGHT Some members of “Tinang 83” and their lawyers on Tuesday gather in front of the Office of the Ombudsman after filing complaints against policemen from Concepcion, Tarlac, in relation to the mass arrest of the farmers and agrarian reform advocates last month. —PHOTO COURTESY OF MAKISAMA TINANG

TARLAC CITY, Tarlac, Philippines — At least 30 policemen from Concepcion town in Tarlac province are facing multiple complaints at the Office of the Ombudsman in connection with the mass arrest of 83 farmers and their supporters while conducting a community cultivation at a disputed agrarian property in Barangay Tinang last month.

Members of the so-called Tinang 83 on Tuesday lodged criminal complaints against Lt. Col. Reynold Macabitas, chief of the Concepcion police, and his men who arrested them on June 9, accusing the police officers of violating the rights of those arrested, detained, and under custodial investigation.

Tinang 83 refers to the farmers, activists, journalists, and students who occupied a 2-hectare section of a disputed property and were detained by Concepcion policemen for allegedly destroying sugarcane planted there.

Complaints for perjury, unlawful arrest, arbitrary detention, physical and mental/psychological torture, and other cruel, inhumane, and degrading treatment or punishment were also lodged against the policemen.

The group also filed administrative complaints against the policemen for grave and serious misconduct when the lawmen allegedly failed to bring them to a medical facility or a doctor for medical examinations before they were detained.

According to the complainants, they were put in a detention cell that was “very crowded and cramped.”

Another administrative complaint for conduct prejudicial to the best interest of the service was filed against the policemen for alleged “gross ignorance of the law” that “tainted the image and integrity of the police force.”

The complainants also asked the Office of the Ombudsman to remove the policemen from service and issue a preventive suspension against them while the investigation is ongoing.

Macabitas on Tuesday reiterated that they were prepared to answer all complaints filed against them in relation to the arrest of Tinang 83. “As law enforcers, it’s inherent for us to respond to complaints. They (Tinang 83) destroyed a property and there was a complaint [filed against them]. We will respond to the case,” he told the Inquirer in a text message.Macabitas said they had exhausted all means to stop what the farmers and their supporters were doing before they were arrested.

“We’re just doing our job to keep the peace and order within our jurisdiction. We had a complainant, evidence and witnesses saying the property was damaged. What we did was not illegal,” he said.

The 200-hectare property is locked in a land conflict between a farmers’ cooperative and agrarian reform beneficiaries (ARBs) belonging to Malayang Kilusang Samahang Magsasaka ng Tinang. Some of the ARBs were among those arrested by Concepcion policemen.

On June 13, several activist groups supporting the farmers and peasant advocates also filed a separate complaint against policemen before the Commission on Human Rights (CHR).In a complaint addressed to CHR Executive Director Jacqueline de Guia, Anakpawis and Unyon ng Manggagawa sa Agrikultura alleged that the Concepcion policemen committed human rights violations when they detained the farmers and their supporters.

According to the CHR complaint, the detainees were subjected to harassment, threats and intimidation, physical injury, inhumane detention, mental abuse, Red-tagging and delays in their release.

The detainees were freed on bail of P12,000 each on June 12 but were charged with illegal assembly as well as malicious mischief. The charges were eventually dismissed by a local court on June 27.