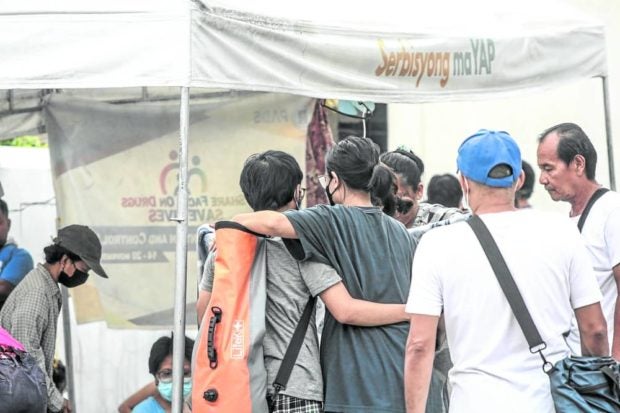 FREED Some of the 83 farmers, peasants’ rights advocates and students comfort each other after their release from the Concepcion police station in Tarlac on June 12 following a four-day detention on charges of illegal assembly and malicious mischief. The charges were later dismissed by a Tarlac court. —PHOTO FROM THE UMANI PRODUCTIONS FACEBOOK

TARLAC CITY—Nearly two weeks after a local court in Tarlac province dismissed the illegal assembly and malicious mischief charges against them, some members of the so-called “Tinang 83” have asked the Department of Justice (DOJ) to dismiss a provincial prosecutor who pursued the case against them.

In a complaint lodged with the DOJ on Thursday, the petitioners also wanted Tarlac Assistant Provincial Prosecutor Mila Mae Montefalco to be charged administratively and penalized.

The farmers alleged that Montefalco committed grave and serious misconduct, gross ignorance of the law and procedure, and conduct prejudicial to the best interest of the service when she subjected the 83 farmers and their supporters to inquest proceedings on June 10.

According to them, Montefalco was “unreasonable, unfair, oppressive and discriminatory” during the proceedings.

In a phone interview on Thursday, Abegail Bucad, an agrarian reform beneficiary (ARB) and one of the 10 complainants, said they were treated “inhumanely” during the inquest proceedings on June 10 following their arrest at Hacienda Tinang in Concepcion while they were conducting “bungkalan” (community cultivation).

“We didn’t have the chance to explain ourselves during the inquest proceedings. She (Montelfaco) kept on yelling at us,” Bucad said in Filipino.

Bucad added: “Montelfaco showed bias while insisting that she used to work for the Department of Agrarian Reform (DAR) and that she knew well about the land dispute.”

On June 9, police in Concepcion arrested and jailed the 83 ARBs and land reform advocates after they were accused of destroying the sugarcane planted at Hacienda Tinang, which is locked in a land dispute between the ARBs and a farmers’ cooperative.

In their complaint at the DOJ, the farmers cited Montelfaco’s “deliberate refusal” to refer the cases to the DAR despite showing their certificate of land ownership award.

“Prosecutor Montefalco asked questions to all those who were arrested in a manner which shows her bias against us. Her questions were intended not to elicit facts, but to incriminate us for whatever crimes we were charged,” they added.

On June 27, Judge Antonio Pangan of the Capas-Bamban-Concepcion, Tarlac, 2nd Municipal Circuit Trial Court dismissed the illegal assembly and malicious mischief charges filed against the Tinang 83 for being “duplicitous.”

The farmers said they only learned that Montefalco also charged them with illegal assembly before the Concepcion Regional Trial Court Branch 113 when the court dismissed the charges for lack of jurisdiction.

The Inquirer tried but failed to reach Montefalco for comments on Thursday. —DONA Z. PAZZIBUGAN, MARIA ADELAIDA CALAYAG AND JUN A. MALIG