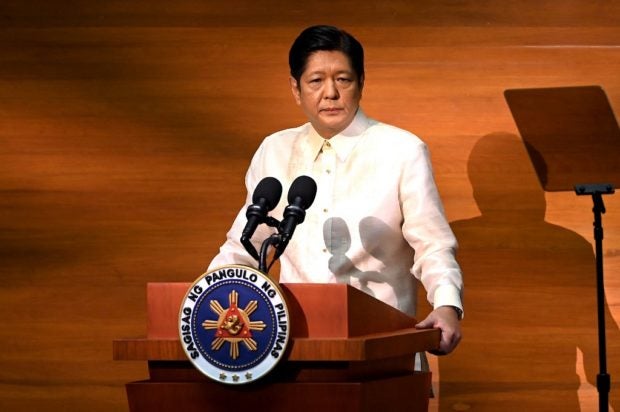 President Ferdinand Marcos Jr. delivers his first State of the Nation address at the House of Representatives in Quezon City on July 25, 2022. (Photo by JAM STA ROSA / POOL / AFP)

MANILA, Philippines — “I will not preside over any process that will abandon even a square inch of territory of the Republic of the Philippines to any foreign power.”

Those were the words President Ferdinand Marcos Jr.  used to rouse Filipino legislators and other government leaders to their feet at the Batasang Pambansa on Monday during his first State of the Nation Address.

“With respect to our place in the community of nations, the Philippines shall continue to be a friend to all. And an enemy to none,” the chief executive told a joint session of the 19th Congress.

“The Philippines has always been open and welcoming to all our foreign friends and visitors. That is our world view, and that is our culture,” he told his audience, which included the diplomatic corps.

“But let me be clear: We are very jealous of all that is Filipino,” he reiterated again to a standing ovation.

As the recognized architect of the country’s foreign policy, the president said the Philippines “will be a good neighbor — always looking for ways to collaborate and cooperate with the end goal of mutually beneficial outcomes.”

“If we agree, we will cooperate and we will work together. If we differ, let us talk some more until we develop consensus. After all, that is the Filipino way,” he said.

“But we will not waver. We will stand firm in our independent foreign policy, with the national interest as our primordial guide,” he added.

Marcos said strong bonds and collaboration were needed among nations, especially in times of crisis, and the partnerships and alliances will provide the stability that all nations need in the new global economy.

He said the country was “grateful for the messages of support and offers of help that we have received from many of our friends in the international community … Such strong relationships can only be beneficial to all involved.”

Marcos did not mention any country in his address, but his first foreign policy pronouncement after being elected president was that he would affirm the ruling of the Permanent Court of Arbitration on the country’s maritime dispute with China.

But he has since met with two Chinese officials — Vice President Wang Qishan and Chinese Foreign Minister Wang Yi—and has accepted the invitation of Chinese President Xi Jinping to visit China.

The president outlined his foreign policy shortly after Vice Adm. Alberto Carlos, the highest ranking military official who oversees security in the Kalayaan Island Group in the West Philippine Sea, met with Chinese ambassador to the Philippines Huang Xilian.

Also a graduate of the US Naval Academy in Annapolis, Maryland, in 1989, Carlos is the most senior Philippine military official to have studied in China.

“Having been accorded the privilege to study and interact with my contemporaries in the US and China gives me a good perspective of Western and Eastern influence. Perhaps, a good tool in reinforcing current efforts of promoting peaceful coexistence and development in the West Philippine Sea,” Carlos said.

Huang said he exchanged views on the China-Philippines friendship with Carlos and looked upon “a better future for our bilateral relations.”