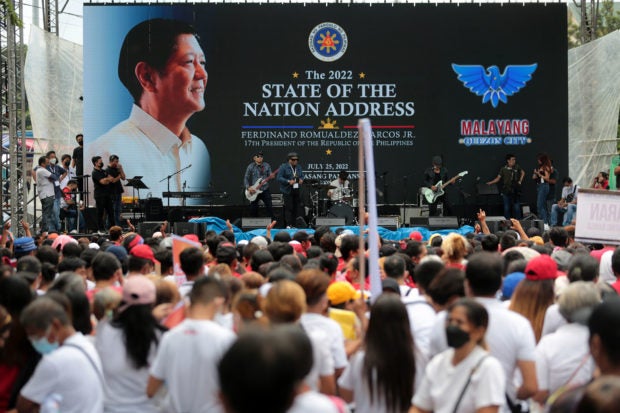 CELEBRATION | Supporters of President Marcos gather a few meters away from the House of Representatives in Quezon City on Monday to listen to his first State of the Nation Address and hold a street party. (Photo by GRIG C. MONTEGRANDE / Philippine Daily Inquirer)

MANILA, Philippines — President Ferdinand Marcos Jr.’s first State of the Nation Address (Sona) drew praise for its “technical” merits in addressing economic growth and high prices, but it was found wanting on specific details and the lack of clarity on its agrarian reform agenda.

“I think the target audience was the business [community] and maybe the supporters whom he has to convince,” Joseph Roxas, president of stock brokerage house Eagle Equities, told the Inquirer.

Michael Ricafort, the chief economist at Rizal Commercial Banking Corp., appreciated specific policies such as the proposed value-added tax on digital services, which could raise revenues of P11.7 billion next year.

The Makati Business Club said the proposals such as ease of paying taxes and boosting of internet connectivity would “energize” the business sector, especially the micro, small and medium enterprises, in the advent of digitalization.

The speech was praised for its emphasis on the continuity of infrastructure projects, especially those using the Public-Private Partnership route.

Marcos also mentioned the need to upgrade and build more airports to support its tourism agenda.

Foreign Buyers Association of the Philippines president Robert Young told the Inquirer that Marcos could have given the manufacturing industry more focus as this sector could lessen the country’s import dependence.

Roxas also said he hoped the president would mention support for the mining sector to generate new revenues amid rising commodity costs.

Philippine Chamber of Commerce and Industry president George Barcelon said Marcos could have touched on bringing in more investments to the healthcare sector.

In a statement to the Inquirer, German-Philippine Chamber of Commerce and Industry executive director Christopher Zimmer said they were encouraged by Mr. Marcos’ focus on renewable energy given the interest from German companies to invest in the Philippines.

Leonardo Montemayor, chair of the Federation of Free Farmers, wanted clarity on the imposition of a one-year moratorium on land amortization and interest payments.

“Shouldn’t all amortizations (past, present and future) be waived?” said Montemayor.

“This would have had the most impact during the pandemic. Yet, its one-year duration is insufficient,” it added.

“Renewable energy is a top priority not just by saying it, but committing to minimizing, then eliminating the use of fossil fuels to protect the environment and consumers. It’s disappointing to hear him talk about incentives and bill for gas and action point for nuclear but no actual plans for renewable energy,” said P4P convener Gerry Arances.