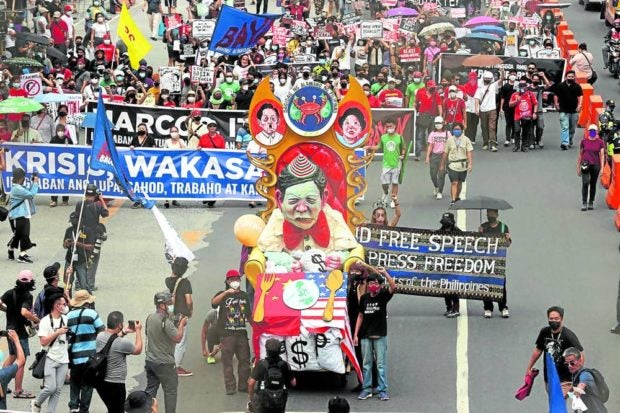 CRY FOR CHANGE | Protesters march from the University of the Philippines campus to Commonwealth Avenue in Quezon City on Monday, as militant groups mark President Marcos’ first State of the Nation Address with a protest rally to urge the new administration to heed the “People’s Agenda for Change.” Protests were also held in the provinces. (Photo by NIÑO JESUS ORBETA / Philippine Daily Inquirer)

MANILA, Philippines — Neither a cordon of police nor heavy rains dampened the spirit of protest on Monday, as people gathered on Commonwealth Avenue in Quezon City vowed to keep watch over President Ferdinand Marcos Jr., who presented his blueprint of government on his 26th day in office when he delivered his first State of the Nation Address (Sona).

But not all rallies a good distance away from the House of Representatives were critical of the new administration. Marcos supporters gathered in front of the President Corazon Aquino Elementary School on Batasan Road, much closer to the House, to hold a “party” celebrating the president’s first Sona.

Pro-Marcos rallies were also held in other parts of the country, but there were protests as well outside the capital region and even abroad.

Demonstrations have practically become a tradition in every Sona, but this year, survivors of the martial law regime of Marcos’ father and namesake led the protests.

Although the president hinted at a progressive Philippines on his watch, playwright-activist and martial law detainee Bonifacio Ilagan refused to believe that address, saying, “All we can expect is the continuation and even strengthening of alliances between domestic and foreign ruling interests.”

He called on Filipinos to continue resisting efforts to whitewash the Marcos record of ill-gotten wealth, as already established in the courts, and of the thousands killed, tortured, and forced to disappear during martial law.

Meanwhile, relatives of victims of the drug war led by Marcos’ predecessor, Rodrigo Duterte, urged the president to let the International Criminal Court investigate the alleged crimes against humanity against the previous administration.

Organizers of the pro-Marcos rally or “party” did a headcount of the attendees and thanked the mayors of Valenzuela, Malabon, Caloocan, and Pasay for sending their “contingents.”

Different bands performed at that gathering and later Vice President Sara Duterte herself appeared and thanked these supporters.

“I hope that we will be united in supporting the implementation of the programs laid down by our president to help our country to rise,” said Sara, the concurrent education secretary.

The presence of members of the Presidential Security Group (PSG) led to anticipation of Marcos’ appearance, but the PSG pulled out at past 6 p.m.

The Quezon City Police District (QCPD) had yet to give a crowd estimate, but Maj. Gen. Valeriano de Leon, director for operations of the Philippine National Police, commended the QCPD for that “peaceful” rally.

“What we observed here was commendable,” he told reporters.

De Leon said he was also satisfied with the “generally peaceful” atmosphere of the protests.

In Baguio City, more than 80 activists gathered at Malcolm Square to declare a Cordillera people’s agenda as an alternative to the Sona.

Another participant at the gathering, Geraldine Cacho, who heads Tongtongan ti Umili, a coalition of multisectoral groups in the Cordillera, urged the Marcos administration to stop the Red-tagging of activists in the region.

In Bacolod City, Negros Occidental, some 60 protesters gathered in front of the Fountain of Justice on Araneta Street, as they called on the people to fight for human rights, freedom, and democracy, as well as the return of the country’s stolen wealth.

As in Quezon City, rallies in Iloilo City became notable for the discordant voices of “peace advocates” supporting Marcos and progressive groups against his administration.

At least 80 Marcos supporters marched from Sunburst Park to the capitol, where about 100 members of progressive groups led by Bayan Panay jeered at the oncoming march led by defeated party-list group Sambayanan.

In Davao City, two members of Kabataan-Southern Mindanao were arrested after joining a rally at Freedom Park organized by the party list group and other progressive allies.

Kabataan said Ismael Pangadas, 22, and Mawing Pangadas, 19, were picked up by police after the rally while waiting for their ride home.

“The illegal arrest was done after the protest action. The police did not even bother to read them their rights. This is clearly fascism in action, blatantly disregarding due process and trampling on human rights,” Kabataan said in a statement.

It was Sunday in the United States when Marcos delivered his Sona. In Washington, more than a hundred Filipino protesters took part in a “People’s Sona” and marched toward the Philippine Embassy.

“It is a policy that has facilitated the forced migration of millions of Filipino people and has not done anything to truly take them out of poverty and it subjects them to abuse, trafficking, and exploitation,” he said.

In New York, protesters belonging to Northeast Coalition to Advance Genuine Democracy gathered outside the Philippine Consulate General to denounce, among other things, “the questionable results of the May 2022 elections.”