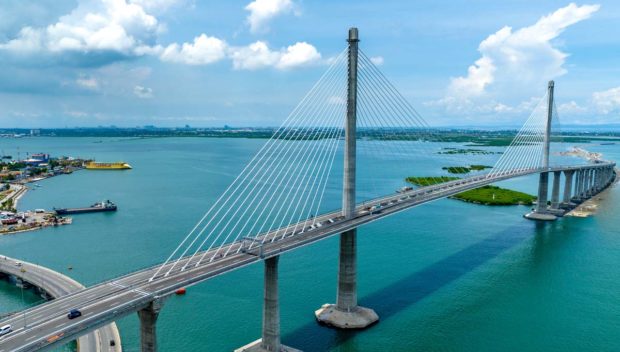 The new CCLEX bridge has become a tourist attraction and a new landmark in Cebu. PHOTO FROM MPTC

A study by the Center for Social Research and Education of the University of San Carlos (USC), Cebu’s leading educational institution, found that by improving traffic flow in Metro Cebu and improving land values, mobility, tourism activities, and growth of trade, the 8.9-kilometer CCLEX helps Cebu and the Central Visayas region recover faster following the devastating impact of the COVID-19 pandemic.

Inaugurated on April 27 this year and opened to the public on April 30, the modern toll expressway—which took four years of “non-stop work” to finish construction—connects mainland Cebu with the island of Mactan.

READ: CCLEX is now open to the public

The CCLEX, according to the study, helps decongest the older and “perennially traffic-clogged” bridges that also span the Mactan Channel: the Mactan-Mandaue and Marcelo Fernan bridges.

The new bridge, which is expected to accommodate 50,000 vehicles per day, has helped in cutting travel time to Cordova or Lapu-Lapu City from the pre-pandemic record of 82 to 85 minutes as motorists will no longer need to pass through the two old bridges to reach Cebu City.

“CCLEX will reduce travel time 20 to 75 percent from the SRP (south road properties) in Cebu City to subdivisions, beach resorts, hotels, and establishments in Cordova, Marigondon, Agus, Maribago, Basak, Bankal, and Punta Engano in Mactan Island by, depending on the distance of their locations from the Gabi Bridge or Pilipog Bridge in Cordova,” the USC study said.

This was one of the CCLEX’s key benefits, which has been recognized by motorists despite the toll rates—worth P90 for Class 1 vehicles, P180 for Class 2 vehicles, and P270 for Class 3 vehicles.

Moreover, the Cordova Gabi-Pilipog Coastal Road—which is expected to further expand the road network in the Mactan Circumferential Road and help decongest traffic in that area—is expected to be opened in a few weeks, just in time for the IRONMAN 70.3 Philippines.

The project “will be used as part of the race route for the event that highlights CCLEX on the 90-kilometer bike route.”

Aside from reducing travel time for motorists, the study also pointed out that the bridge also helps make land resources more accessible.

“These new municipal values are already around 400 percent to 1,000 percent of the land values three years ago, according to the municipal assessor. With the increase of land values, they expect revenue collection to also increase,” the study said. 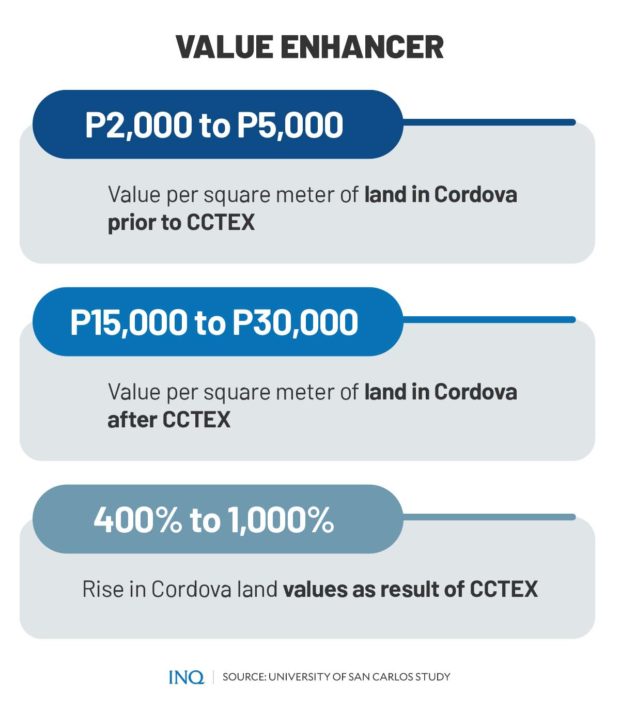 “With more investors showing interest in putting up businesses in the municipality, Cordova officials are also expecting economic activity to become more vibrant than it currently is,” it added.

The USC forecast that the bridge would become a “catalyst of socio-economic development in the town and in the neighboring cities and municipalities.”

As the bridge helps enhance the mobility of motorists passing to and from mainland Cebu and Mactan Island, the study saw that the CCLEX might also energize tourism—a key driver of Cebu’s economic growth—in those areas.

“CCLEX links high population growth areas and established commercial and industrial centers. The movement of people will be relatively high as a consequence as persons move for employment, business, or leisure,” said the USC study.

It added that the iconic bridge itself had become a  “must-see” tourist attraction for being the country’s largest and tallest water-crossing infrastructure and for offering scenic views of Cebu’s skyline to motorists.

According to the study, the majority of the 56 percent of Department of Tourism (DOT)-accredited hotel rooms in Lapu-Lapu City are built in the resorts located on the eastern part of Mactan near the CCLEX.

“CCLEX could then allow tourists based in these resorts to access destinations in Cebu City and the southern parts of Cebu with greater ease,” said the USC study, adding that the CCLEX will ease access between Cebu City and Mactan and allow more tourists to visit tourist facilities in Lapu-Lapu City and Cordova frequently.

“The addition of the CCLEX link effectively extends development effects of SRP to the municipality of Cordova and opens up the tourism in the eastern side of Mactan to residents from southern Cebu, and the SRP’s commercial developments to residents and tourists based in Mactan Island,” USC added.

Both gov’t units will benefit

According to the CCLEX management, the toll collected from motorists passing through the bridge contributes to the growth of both the Cebu Cordova Link Expressway Corporation (CCLEC) and the local government units of Cebu City and the Municipality of Cordova.

“Under the 45-year concession agreement that the two government units awarded to CCLEC to build, operate and maintain CCLEX, Cebu and Cordova allowed their resources, specifically public lands, to be used by the project as their contribution to the joint venture,” a statement read.

“In return, they both receive one percent of the project’s gross revenues starting on the first year of operations,” it added.

Motorists can still register for CCLEX RFID at cclex.com.ph. The free installation of RFID tags on vehicles is also ongoing.

Meanwhile, CCLEX users can easily top up their RFIDs through the MPT DriveHub app, which can be downloaded at https://qrco.de/DriveHubPR-1.