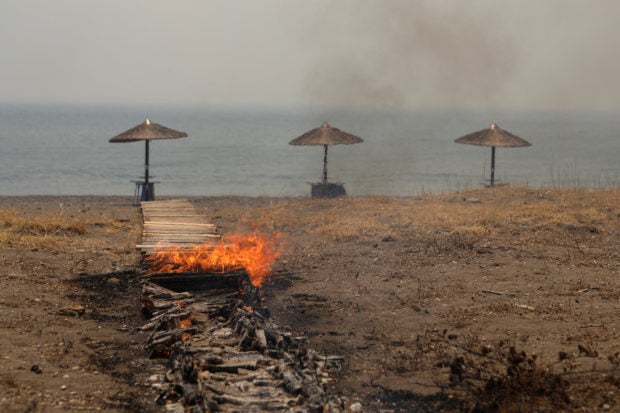 A wooden beach bar corridor burns as wildfire rages near the village of Vatera, on the island of Lesbos, Greece July 23, 2022. (REUTERS)

ATHENS  – A wildfire that started in mountainous forests on the Greek island of Lesbos near Turkey on Saturday burned properties at the beach resort of Vatera as more aircraft joined firefighting efforts.

Authorities earlier ordered the evacuation of the Aegean sea resort as the wildfire approached dangerously close, fanned by strong winds.

Thick billowing smoke could be seen in the area. One fleeing resident told state TV ERT that her home was on fire.

“We are battling to save homes,” Taxiarchis Verros, mayor of western Lesbos, told the broadcaster.

Vatera, an 8 km (five miles) long sandy beach in the southern part of Lesbos, is a popular tourist spot. Lesbos was at the forefront of Europe’s refugee crisis six years ago.

Homes were burned and one firefighter was injured as the blaze engulfed Vatera, with flames damaging a beach bar and burning sun umbrellas.

Greece is suffering a second consecutive summer of wildfires this year.

A wildfire in mountains near Athens earlier this week damaged homes and forced hundreds of people to flee, with authorities calling this summer one of the toughest in the Mediterranean.

Last year, wildfires ravaged about 300,000 acres (121,000 hectares) of forest and bushland across Greece during the country’s worst heatwave in 30 years.