Couple in pricey wine heist fall after chase across Europe 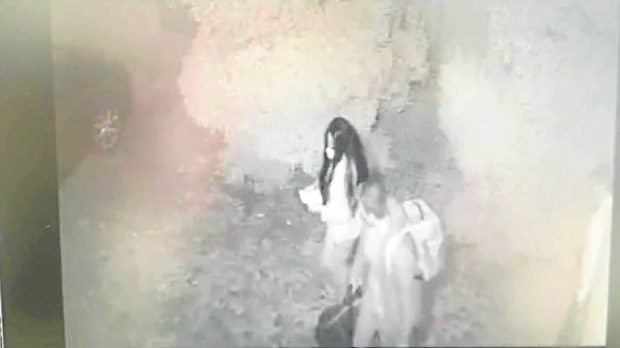 WELL PLANNED A screen grab from CCTV video shows a man and a woman walk out from Restaurante Atrio in Spain carrying three bags of stolen wine bottles worth up to $1.7 million on Oct. 27, 2021. A pair of suspects has been arrested in Croatia after a nine-month-long chase across Europe. —REUTERS

MADRID—A former Mexican beauty queen and a Romanian-Dutch accomplice have been arrested in Croatia over the theft of $1.7 million worth of prestige bottles of wine in Spain after a nine-month chase across Europe, police said on Wednesday.

In a statement, Spanish national police said that on Oct. 27, 2021, in the western city of Caceres, 45 wine bottles worth a total of 1.65 million euros, including one “unique” 19th-century vintage worth 310,000 euros, were spirited out in a meticulously planned theft from the cellars of the famous hotel-restaurant El Atrio.

Police investigators believe the woman, a 29-year-old Mexican, who according to Spanish daily El Pais had competed in a beauty pageant in her homeland, distracted El Atrio waiters
by ordering room service from the Michelin-starred restaurant after its kitchen had closed.

Meanwhile, her 47-year-old male accomplice slipped down to the wine cellar, opened it with a master key he had stolen during a prior visit, and filled three backpacks with the bottles, wrapping them in hotel room towels for protection, according to the police statement.

The next day, hotel CCTV captured the pair, who had checked in with false Swiss identity documents, checking out at 5.30 a.m. and leaving on foot with no forensic trace of their presence left
at the hotel, it said, leading police to initially believe an organized gang was behind the heist.

The two suspects had visited El Atrio three times before the robbery, the police statement said, and had, like many customers, been given a tour of the wine cellar.

Among the stolen items of wine was a bottle of prestigious French Bordeaux Chateau d’Yquem from 1806, which had an “incalculable” value, said sommelier Jose Polo, a co-owner of El Atrio.

“That bottle was part of my personal history, almost part of me, of the history of Atrio, but also of Caceres, of its citizens, of wine lovers all over the world,” Polo said in a letter to
local media quoted by El Pais.

The two suspects left Spain within days and were pursued for months across Europe before being identified by Croatian border guards as they crossed from Montenegro, police said.

Spanish police worked with counterparts in the Netherlands, Croatia and Romania as well as Interpol to catch the pair, who have not been identified pending extradition and formal charges being filed.

The stolen wine has not been recovered and the investigation is continuing, according to Spanish media outlets.