UPHOLDING HISTORY, MEMORY The Campaign Against the Return of the Marcoses and Martial Law (Carmma), Bayan and other activist groups launch the [email protected] movement to spread a wider awareness of martial law-era abuses. Among those in photo are Liza Maza, Carol Araullo, Satur Ocampo, former Social Welfare Secretary Judy Taguiwalo, film and stage director Joel Lamangan, Edre Olalia of the National Union of Peoples’ Lawyers and Kej Andres of the Student Christian Movement of the Philippines. —LYN RILLON

Two months before the 50th anniversary of the declaration of martial law, activist groups on Thursday organized a campaign to counter what they called the “distortions” of the historical record of the Marcos dictatorship’s rule, from the time of martial law up to Ferdinand Marcos’ downfall in 1986.

The [email protected] campaign, as this movement is called, was launched at Quezon City Sports Club amid a controversy over a film about the Marcos family’s last days in power that is due to be shown on Aug. 3.

Among the groups involved in the movement are the Campaign Against the Return of the Marcoses and Martial Law (Carmma), National Union of Peoples’ Lawyers (NUPL), Student Christian Movement of the Philippines, University of the Philippines Repertory Company, Tanggol Kasaysayan, Desaparecidos, Selda, Bayan, Karapatan and Courage.

Leading this campaign are martial law-era detainees and human rights advocates, such as Bonifacio Ilagan, Judy Taguiwalo, Joel Lamangan, Satur Ocampo, Liza Maza, Carol Araullo and Edre Olalia among others. Taguiwalo said any commemoration “must not only be rooted in revisiting the past but in standing our ground and continuing the fight against historical denialism and deception.”

Marcos declared martial law on Saturday night, Sept. 23, 1972, although it began to be enforced on Friday night, according to a historical account of that episode on the Official Gazette website. The declaration was subsequently antedated to Sept. 21.

Lamangan, who was tortured during his incarceration, said: “I have grown old in this struggle and yet we have no intentions of stopping now, even if we have wobbly knees and weak eyesights now.”

Central to the [email protected] campaign is encouraging a wider awareness of that historical chapter through arts and culture. Thus the organizers are planning, among other activities, festivals, exhibits and workshops about martial law.

Lamangan called on other artists “not to join the ranks of those who help cover up the truth.”

“Let us instead help the youth understand what really happened before,” he said.

The multiawarded film and stage director expressed “disgust” at the soon to be shown “Maid in Malacañang,” which is set during the last 72 hours of the Marcoses in the Palace amid the People Power Revolution of February 1986.

But he said he would still watch it to see how its director, Darryl Yap, treated its subject.

Critics of the Marcoses anticipate the film, which is being promoted as a drama-comedy, to be another attempt to contradict historical facts about their rule.

‘About time we tell our story’

But Sen. Imee Marcos maintained that their assumptions are “totally inaccurate,” adding that “It’s about time we tell our story, too, about what happened in Malacañang, … about what we know.”

The eldest daughter of the late strongman, the senator serves as chief consultant of the film. At an online press conference last month, she said “We’re just telling the story we know, from our point of view. We’re not changing anything from what they say. We’re not revising anything. It’s totally inaccurate to say that. We’re simply explaining the happenings in our final three days in [the Palace].”

“And I think the people have the right to know what was happening back then,” she said, adding that “[U]nfortunately, there will have to be some truths told and some lies, debunked, finally.”

It was Yap who pitched the movie concept to Viva Films after his initial discussions with Senator Marcos.

Yap said he wanted to portray the Marcoses as “normal people or family.” 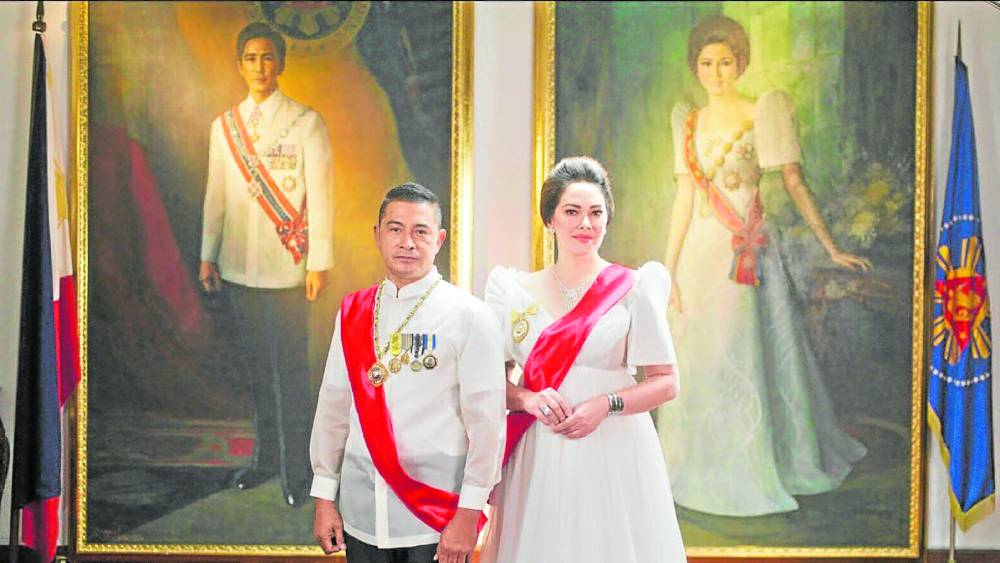 A scene in the upcoming film “Maid in Malacañang” with Cesar Montano as Bongbong Marcos’ father; Ruffa Gutierrez as Imelda Marcos

“They’re either glamorized or deglamorized—it’s as if they aren’t real people. So I thought why not give them a chance to show what they were like in the Palace as family, without going against, criticizing or putting in a negative light what people know to be quote-unquote history,” he said.

“Maid in Malacañang” is above all a “family movie,” Yap said. “Every family goes through things, moments of laughter and a fair share of drama. This is a family film …. We will show the relationship between a couple, among the siblings, and how a family unites amid a crisis.”

Yet despite that assertion, Yap also sees his movie as something that will “fill a missing piece in our history.”

A scene from “Malacañang” already circulating on social media prompted some fact-checking by historians and other commenters to question the depiction of ralliers outside the Palace carrying torches, which the 35-year-old director said was a touch of “creative vision and freedom.”

There were also social media posts critical of the late President Corazon Aquino which shared a screenshot of a woman in yellow, her face cropped out of the image, with the caption “Get them out of the Philippines.”

This prompted the late President’s defenders, in turn, to quote the book, “People Power: An Eyewitness History,” in which the late Supreme Court Associate Justice Cecilia Muñoz Palma wrote in her contributing piece that, contrary to the aspersion against Aquino, she was actually open to have the Marcoses flown to their home province of Ilocos Norte for two more days before they were brought out of the country.

A little known “sidelight” about this episode—according to Nick Joaquin’s “Quartet of the Tiger Moon,” his reportage on the “People Power apocalypse”—was that “Mr. Marcos’ mother was reported to have left with him and it wasn’t until a month later that Doña Josefa was located at the Philippine Heart Center in Quezon City, a patient there, it turned out, for the last eight years, running up bills amounting already to over a million pesos when her son fled the country….”

The New York Times reported in March that year that “the new Government of President Corazon C. Aquino agreed to pick up the bill ‘for humanitarian reasons.’” According to the Times report, the hospital expenses amounted to $57,250.

Asked to comment about the upcoming film, activist and award-winning actor-director Bart Guingona said “They should approach it as a piece of trash.”

“The need to saturate all media … with lies is a tactic. It’s called fire-hosing. If you hear a lie often enough you begin to believe it’s true, or at least you begin to doubt your old certainties.”

“Instead of playing into their hands, trying to debunk their lies, although that too has its uses, we need to continue telling stories that purvey the truth. We need to recruit our art[s] and artists in the defense of truth. But because the arts have always reached only niche markets, we need to play where the firehose plays, social media,” Guingona said.

Historian and Inquirer columnist Ambeth Ocampo, who endured online bashing after he chided Ella Cruz, the 25-year-old star in “Malacañang,” for likening history to gossip, agreed with the view that social media must be reclaimed in behalf of truth and accuracy.

“I think historians should engage in this arena, I do my part in my social media pages but that is not enough. If people want to believe in fake news and historical distortion because they have no choice, that is one thing, but to reject history and truth is their folly and our collective misfortune,” Ocampo said.

“The Marcoses have skillfully rebranded themselves since their return,” he noted further. “We see that when Borgy Manotoc became a signature Bench model, we should have seen that early how they were rebranded from a disgraced political family returning from exile into media and social celebrities. Remember Senator Imee on the cover of Tatler? From Ferdinand Marcos to BBM is a master stroke, it’s like Kentucky Fried Chicken downplaying the unhealthy word ‘fried’ and rebranding themselves as ‘KFC.’”

“So, how do you combat this? Get to know your history, not from YouTube and TikTok but from verified historians and journalists. Knowing the past, the correct past, is the first step in the proverbial journey of a thousand miles,” Ocampo said.