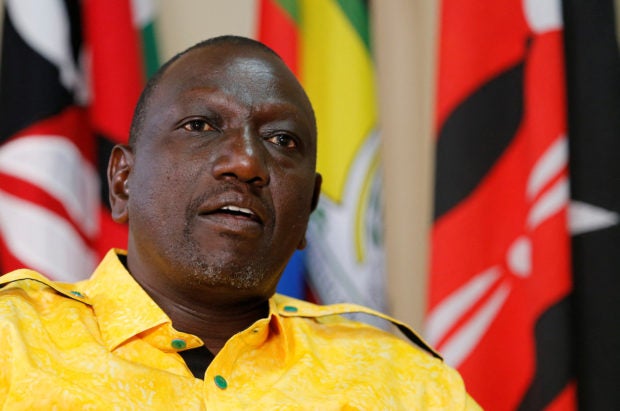 Kenya’s Deputy President William Ruto of United Democratic Alliance (UDA) and Kenya Kwanza political coalition speaks at an interview with Reuters ahead of the forthcoming presidential elections, at his Karen residence in Nairobi, Kenya, July 20, 2022. REUTERS

NAIROBI — Kenya’s deputy president and presidential aspirant William Ruto said he will publish government contracts with China and deport Chinese nationals working illegally if he is elected on August 9, promises likely to resonate with citizens pummeled by mounting debt and the skyrocketing cost of living.

The contracts are not public and some Kenyan organizations have lodged court cases to try to force full disclosure of the deals.

Ethiopia has restructured its Chinese debt and Zambia is seeking to do – something Ruto said he would not do.

“Kenya has the capacity to handle its debt situation,” he told Reuters in an interview, explaining his intent not to re-organise debt if he wins.

Ruto, 55, paints the election as a clash between “hustlers and dynasties” – a jab at Raila Odinga and Kenyatta, son of the nation’s first vice president and president respectively.

Ruto says he once hawked chickens by the roadside.

Instead of planning mammoth expressways or new railways, Ruto’s campaign is touting a plan to dish out loans to “hustlers” or small businessmen and women, symbolized by his campaign symbol of a wheelbarrow.

Ruto spoke to Reuters in his office in a compound in one of Nairobi’s wealthiest suburbs, where several armed policemen stood guard.

The compound is neatly maintained, with well-manicured lawns. A helicopter and convoy of luxury vehicles were parked there. Outside, a few supporters waited with banners proclaiming RUTO FOR PRESIDENT hung around a battered handcart.

Ruto was wearing a yellow shirt with green trim, his party’s colors, and sat in a room bedecked with several flags, including the national flag.

He sipped on tea as he dismissed comments by his chief economic adviser, David Ndii, that Ruto’s party was “not the place to look for anti-corruption champions.”

“Someone quoted him out of context,” Ruto said.

He listed the ways he would tackle graft – more money to overcome shortages of judges and magistrates, independent budgets for investigating bodies, and making sure parliament has an active opposition.

“The challenge we have at the moment is the weaponization and the politicisation of corruption.”

All sides in the campaign have accused each other of corruption and they all deny the allegations.

Kenyatta has backed Odinga, a veteran opposition leader, for president in a bid to sideline Ruto, whom he describes as unfit for office.

The incumbent’s embrace of his old rival and his rejection of his deputy is not unusual for Kenyan politics, which is driven more by personality, ethnic alliances and backroom deals than ideology.

Ruto and Odinga were political allies during the disastrous 2007 elections. A dispute over the result left 1,200 Kenyans dead and Ruto and five others facing charges of at the Hague-based International Criminal Court. The case later collapsed.

He brushed off questions about whether he should have resigned if the government he served in was not serious about tackling corruption, saying he’d raised the issue repeatedly and had been able to deliver other benefits to Kenyans.

“I am not a quitter,” he said. “Instead of walking away from the people who elected me, I could still do many things.”

‘No room’ for gays in Kenya, says deputy president