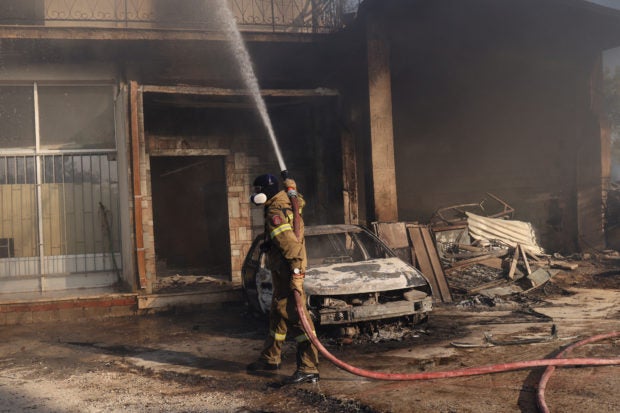 A firefighter tries to extinguish a wildfire burning in Pallini, near Athens, Greece July 20, 2022. REUTERS

ATHENS/LONDON — Emergency services battled wildfires across swathes of southern Europe amid mass evacuations on Wednesday, as warnings sounded in London after Britain’s hottest day that the fight against climate change needed to be stepped up.

Hundreds fled in central Italy as gas tanks exploded in a forest fire near the Tuscan town of Lucca. Similar numbers fled in Greece as a blaze fuelled by gale-force winds raged in mountains north of Athens. Greek authorities said later in the day that the blaze had been tamed.

A brutal heatwave with spikes well above 40 Celsius (104F) settled over southern Europe last week, part of a global pattern of rising temperatures, widely attributed by scientists and climatologists to human activity. It is forecast to dump searing heat on much of China into late August.

It is also expected to expose around 100 million Americans to temperatures above 38C on Wednesday and set records in Texas, Louisiana and Arkansas.

Power consumption is predicted to hit new peaks in Central U.S. states – adding to greenhouse gas emissions – as homes and businesses crank up air conditioners to combat a heatwave forecast to last into next week.

While the record heat last week around parts of the Mediterranean has eased, mercury readings have begun heading up again in Portugal, Spain and Italy. 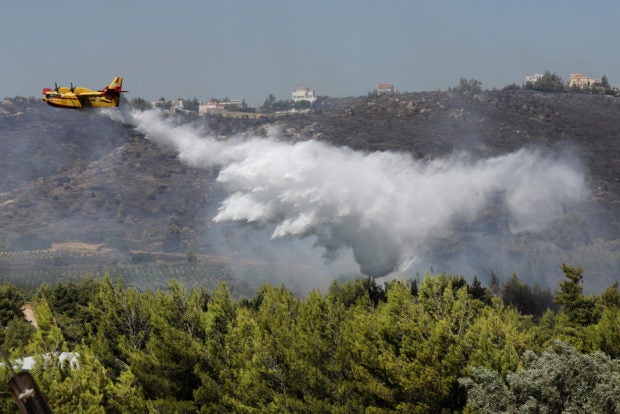 A Canadair aircraft makes a water drop as a wildfire burns in the Pikermi suburb of Athens, Greece, July 20, 2022. REUTERS

Wildfires burned in several areas of Italy, including one that threatened to leave part of the northeastern city of Trieste without power and water, and 14 metropolitan areas including Rome, Milan and Florence were due to be put on the country’s highest heatwave alert on Thursday.

Forecasters there said that temperatures were expected to hit 40C across a swathe of the north and centre this week.

That mark was topped in Britain for the first time on Tuesday, shattering the country’s previous temperature record by 1.6 degrees Celsius. At least 13 people have died while swimming to cool off.

The Chief of Science and Technology of Britain’s Met Office, Stephen Belcher, said that unless emissions were reduced, the country might experience similar heatwaves every three years.

British engineers raced on Wednesday to fix train tracks that buckled in the heat after firefighters worked through the night to damp down wildfires. On Tuesday, London firefighters endured their busiest day since World War Two.

‘Our grandchildren will suffer’ 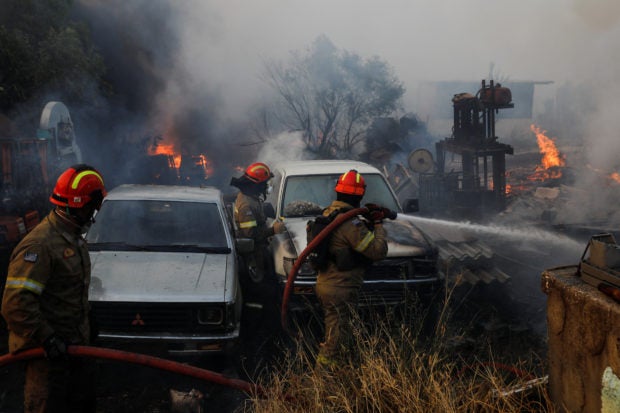 The shift in climate is leading to more wildfires and will force France and the European Union to take “structural decisions…in the years to come”, President Emmanuel Macron said on Wednesday.

Another fire close to the border with Croatia and Slovenia forced state-owned shipbuilder Fincantieri to close down its plant in the port city of Monfalcone, which employs 3,000 people.

As the fire crossed into Slovenia, the mayor of nearby Trieste told local TV that parts of the town could soon stop receiving power, which would shut off the water supply.

In Greece, thick smoke darkened the sky over Mount Penteli, 27 km (16 miles) north of Athens, where close to 500 firefighters, 120 fire engines and 15 water-carrying planes managed to stem the spread of a wildfire.

“Yesterday’s fire in the area of Penteli had all the features of a situation which was very hard to manage,” Civil Protection Minister Christos Stylianides said in a televised statement later on Wednesday.

“Now the fire has been brought under control.”

Greek authorities said they evacuated nine settlements and a hospital, and police helped at least 600 residents out of fire zones. Strong winds were forecast to persist in the area until Thursday.

In France, where firefighters in the southwestern Gironde region have been battling since July 12 to contain huge forest fires, Agriculture Minister Marc Fesneau said more money needed to be invested to tackle such threats.

In Portugal, as the Murça fire raged nearby, olive tree grower Manuel Lopes, 67, feared for his plantations and for the future of his drought-stricken region. “Our grandchildren … will suffer if this (climate change) doesn’t stop,” he said.