Marcos: Some areas may still use ‘blended learning’ | Inquirer News 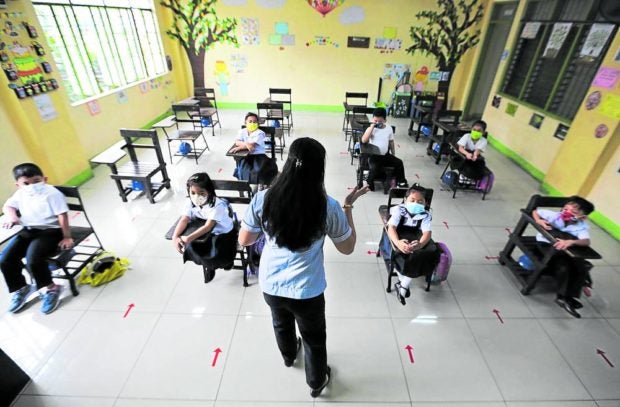 HYBRID SETUP | In-person classes such as this at Pedro Cruz Elementary School in San Juan City will be A priority in the coming school year, but blended learning will be allowed in certain areas with special circumstances. (Photo by GRIG C. MONTEGRANDE / Philippine Daily Inquirer)

MANILA, Philippines — Acknowledging concerns on the impending return to full in-person classes by November, President Ferdinand Marcos Jr. said “blended learning” would continue beyond Oct. 31 in “specific” areas to be identified by the Department of Education (DepEd).

During the Cabinet meeting on Tuesday, Malacañang said the president directed the DepEd, which is headed by Vice President Sara Duterte, to intensify preparations and planning, saying that “as much as possible, classes should really be face-to-face.”

Marcos also ordered the DepEd to prepare the devices and materials that were not provided to children during the pandemic, citing issues with internet connectivity and the increasing number of COVID-19 cases in the country.

Malacañang said the president was concerned that these issues might affect the implementation of in-person classes, but “he was nevertheless determined to proceed with the plan.”

According to Malacañang, the government would be “forced” to continue the blended learning setup in some areas if the issues raised would not be addressed.

In a statement on Wednesday, Duterte clarified that while the DepEd would come up with a plan to “institutionalize” blended learning in certain areas, “the president agreed that [such] plan should be made with a caveat that face-to-face classes shall be the priority and blended modality shall be considered only in specific schools and areas with special circumstances.”

Duterte underscored that while “no details are forthcoming anytime soon” on the plan to hold a blended learning modality in some areas, the requirement of five-day in-person classes “is still in effect.”

They can start full in-person classes as soon as schools reopen on Aug. 22 but can also choose from any of the following:

Private schools have been asking Duterte to let them continue with blended or hybrid learning, as the mandatory physical classes “pose serious transition issues” for private school stakeholders.

This was despite a recent Pulse Asia survey commissioned by Sen. Sherwin Gatchalian showing that about 94 percent of adult Filipinos agreed that the government must now hold full in-person classes. The survey, conducted from June 24 to 27, noted that only 2 percent disagreed with a return to full in-person classes while 4 percent were undecided.

Joseph Noel Estrada, managing director of the Coordinating Council of Private Educational Associations of the Philippines (Cocopea), earlier said that they were not against the return of in-person classes for the next school year.

“But we are just appealing to be given flexibility in delivering other platforms that support face-to-face classes,” he said, adding that each private school would require an additional 50-percent capacity for classroom and school personnel to implement physical distancing required under existing health protocols.

“The DepEd said it would build more classrooms for public schools. But for the private sector, we cannot just build classrooms and buildings easily, like what [the department] plans to do … to accommodate every student,” Estrada said.

The Federation of Association of Private Schools and Administrators (Fapsa) echoed the same sentiment that some private schools were not prepared to conduct in-person classes yet, especially those affected by Typhoon “Odette,” which ravaged the Visayas in December last year.

“This is not to disagree, because that’s already an order, but on behalf of member-schools of Fapsa we’re appealing to have a leeway on behalf of the private schools,” Leo Aberion, spokesperson for Fapsa, said in a recent interview with ANC.

Aberion noted that parents might withdraw the enrollment of their kids because they originally signed up for a hybrid distance learning setup.

Meanwhile, the progressive teachers’ group Alliance of Concerned Teachers (ACT) said Marcos’ recent pronouncement on blended learning was an “admission of the dire state” of the education system in the country.

“It highlights the failure to address classroom and teacher shortages for the longest time [that it] would not even allow us to bring all our students back to school without compromising their health and safety, especially in urban areas, despite the urgent need for face-to-face instructions,” ACT chair Vladimer Quetua said in a statement.

The group said the national government must prepare an “effective and comprehensive” strategy to provide for students’ needs in blended learning and that it should “not just depend on local governments.”

“At the upcoming State of the Nation Address we want to hear and see how President Marcos Jr. will address the classroom and teachers shortages [at] the shortest time possible,” Quetua said.