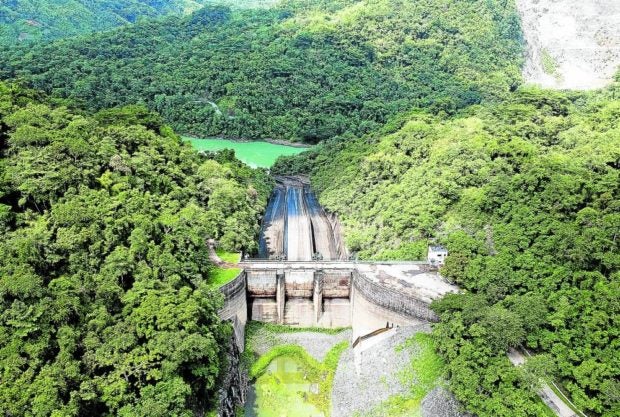 The spillway of Angat Dam in Norzagaray, Bulacan. This photo was taken during a dry spell in
June 2019. (File photo by GRIG C. MONTEGRANDE / Philippine Daily Inquirer)

CITY OF MALOLOS, Bulacan, Philippines — The water level at Angat Dam has been dropping in the last three weeks despite the occasional heavy downpour in the area.

On Tuesday, the elevation was at 179.88 meters above sea level, which was below the minimum operating level of 180 masl, according to the Bulacan Provincial Disaster Risk Reduction and Management Office (PDRRMO).

Felicizima Mungcal, the PDRRMO head, said it was on July 17 when the reservoir’s level began to fall below the operating level after its elevation dropped to 179.98 masl.

Mungcal said the dam’s water level has been dropping owing to the lack of rainfall in the area. The dam is located inside the Angat watershed that straddles parts of the towns of Norzagaray and Doña Remedios Trinidad.

“We experienced occasional but scattered rain over the Angat watershed in the past weeks. It was not enough to raise the dam’s water level,” Mungcal told the Inquirer in a phone interview on Tuesday.

Data from the PDRRMO showed that the dam’s elevation decreased by 1.65 meters since June 30, when it was at 181 masl.

Mungcal said the dam’s dipping level was also due to the steady allocation of water for Metro Manila. The reservoir meets approximately 90 percent of Metro Manila’s and neighboring provinces’ potable water needs.

On July 15, the dam’s water supply for farm irrigation was also decreased to 20 cubic meters per second from the normal water allocation of 40 cms.

Despite this, the reduced irrigation allocation and the intermittent rain were still enough to supply farmlands in Bulacan, said Carlos Dimaapi, president of Bintog-San Jose-Bulihan Irrigators Association.

In Bulacan, Angat Dam level drops due to lack of rainfall