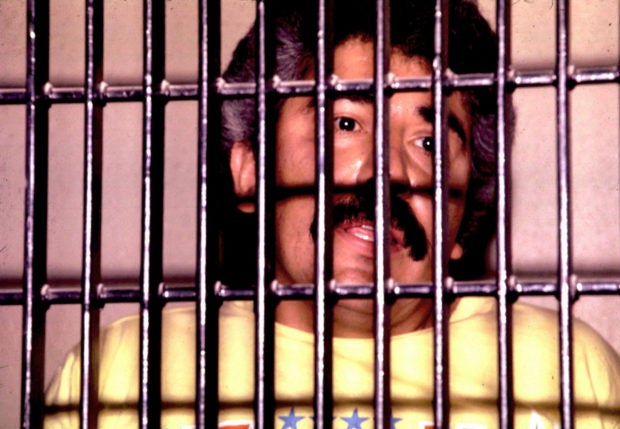 Mexican drug lord Rafael Caro Quintero is shown behind bars in this undated file photo. Quintero won an initial appeal against his conviction and 40 year sentence for the 1985 murder of U.S. DEA agent Enrique Camarena. Quintero will stay in jail while prosecutors appeal against the ruling

MEXICO CITY – A Mexican court on Monday temporarily blocked the extradition of a drug lord wanted for the murder of a US undercover agent, dimming Washington’s hopes of a quick handover.

Rafael Caro Quintero, 69, is on the FBI’s list of 10 most-wanted fugitives for the kidnap, torture and murder of Drug Enforcement Administration (DEA) special agent Enrique “Kiki” Camarena in 1985.

A federal judge in the western state of Jalisco ruled that Caro Quintero cannot be handed over to the United States without a proper extradition process.

It is unknown how long the procedure will take, but any delays are likely to disappoint US officials.

US Attorney General Merrick Garland had said on Friday that Washington would seek the drug kingpin’s “immediate extradition.”

Caro Quintero’s arrest Friday came nine years after he was freed by a court on a technicality, having served 28 years of a 40-year sentence in Mexico for Camarena’s murder.

By the time Mexico’s Supreme Court overturned the decision, Caro Quintero had already gone into hiding.

“We’re going to take care that there’s no corruption or any act contrary to the law,” he said.

Asked about the US request for Caro Quintero’s extradition, Lopez Obrador said only that it would be “decided by the competent authority.”

Caro Quintero was detained by Mexican marines in the town of Choix in the northwestern state of Sinaloa, and is being held in the high-security Altiplano prison in central Mexico.

Lopez Obrador insisted that no DEA personnel had participated in the drug kingpin’s capture and denied that it was the result of pressure from Washington, saying: “We’re an independent government.”

Caro Quintero, alias “Rafa,” has a $20-million bounty on his head.

He is accused of co-founding the now-defunct Guadalajara drug cartel and currently runs an arm of the infamous Sinaloa cartel, according to US authorities.

Fourteen Mexican marines who took part in the operation died in a helicopter crash after Caro Quintero’s arrest.