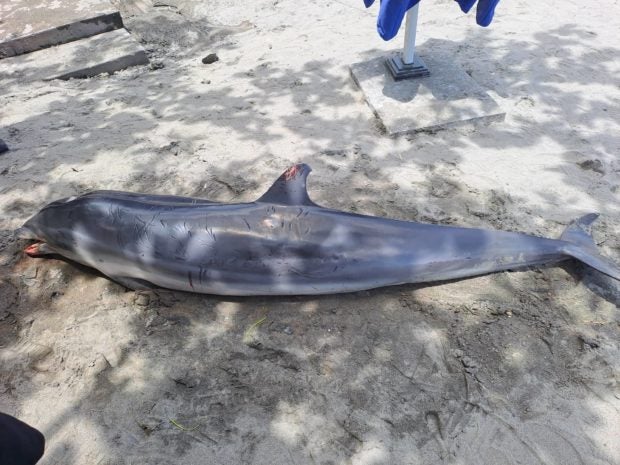 This photo shows a Fraser’s dolphin (Lagenodelphis hosei) that died due to severe jaw injuries after it was found in the shallow waters of Barangay Urbiztondo in San Juan, La Union, on Monday, July 18, 2022. (Photo courtesy of Dr. Hasmin Chogsayan)

SAN FERNANDO CITY, La Union — A Fraser’s dolphin (Lagenodelphis hosei) died due to severe jaw injuries after it was found in the shallow waters of Barangay Urbiztondo in San Juan town in this province on Monday, authorities said.

Dr. Hasmin Chogsayan, a veterinarian for the Bureau of Fisheries and Aquatic Resources, said beachgoers and resort workers saw the dolphin struggling on the beach at around 9:30 a.m.

She said the dolphin had a comminuted fracture (or a broken bone) in its jaws.

“It could have been hit hard by an unscrupulous person somewhere out in the sea. It swam to the beach to seek help,” she said.

The distressed dolphin struggled in the water while beachgoers tried to bring it to the shore. The marine mammal, however, died 20 minutes later.

Some videos captured by villagers showed the dolphin swimming unsteadily toward the beach when the water turned red due to the dolphin’s blood that came from its cracked lower and upper jaws, said Chogsayan.

She said the dolphin had normal organs and was apparently healthy, but could not survive because of the severe injury and blood loss.

“Some people have yet to understand the importance of protecting marine species,” Chogsayan said.

Frasier’s dolphins are protected under the Convention on International Trade on Endangered Species of Wild Flora and Fauna 2, which aims to ensure that international trade in specimens of wild animals and plants does not threaten the survival of the species. INQ