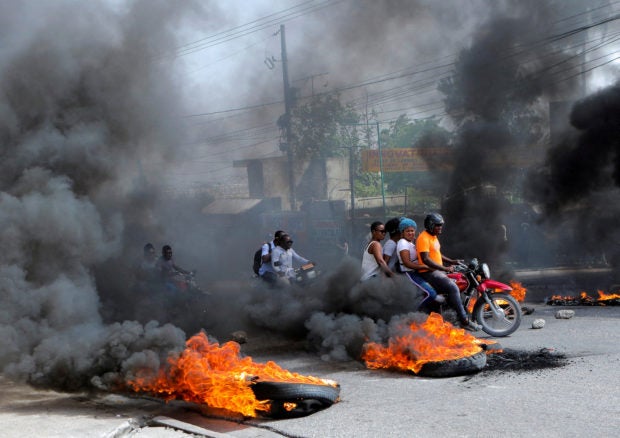 FILE PHOTO: Motorcycle drivers pass through a burning road block as anger mounted over fuel shortages that have intensified as a result of gang violence, in Port-au-Prince, Haiti, July 13, 2022. REUTERS/Ralph Tedy Erol/File Photo

UNITED NATIONS — The United Nations Security Council on Friday unanimously threatened targeted sanctions against criminal gangs and human rights abusers in Haiti and called on countries to stop a flow of guns to the strife-torn Caribbean country.

Violence has soared since the assassination last year of President Jovenel Moise, which created a political vacuum that gangs have taken advantage of to expand control over territory.

While China voted in favor of the resolution on Friday, which extended a U.N. political mission in Haiti for 12 months, it expressed disappointment that the 15-member body had not imposed a formal arms embargo on gangs in Haiti.

“We hope that this will not send any wrong signals to the gangs,” China’s U.N. Ambassador Zhang Jun told the council, adding that Beijing would continue to push for a U.N. embargo.

China took an unusually active stance in the Security Council negotiations on the resolution, drafted by the United States and Mexico.

To the ire of China, Haiti has long recognized Taiwan’s sovereignty. Some analysts say Beijing may see the impending political transition in Haiti as a chance to convince the country to swap its diplomatic ties to China from Taiwan.

“Its statement about gangs maybe a constructive way for it to market a switch … while also recognizing that Chinese companies would operate in Haiti following such a change, and thus it has real practical interests in getting the gang violence under control,” said Evan Ellis, a Latin America research professor with the U.S. Army War College.

Zhang disagreed, saying China’s only interest was to help the Haitian people and the Haitian government.

“I don’t think it’s reasonable today to link the two issues,” he told reporters. “It’s true that they have diplomatic ties with Taiwan and we are against it. However, on this issue, that’s not the basis of our position.”

The U.N. political mission in Haiti works with the government to strengthen political stability and good governance, rights protection and justice reform and to help with the holding of free and fair elections.

U.N. peacekeepers were deployed to Haiti in 2004 after a rebellion led to the ouster and exile of then-President Jean-Bertrand Aristide. Peacekeeping troops left in 2017 and were replaced by U.N. police, who left in 2019.