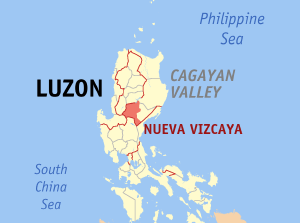 An initial investigation showed that the L-300 van driven by Ancheta was heading to Bambang town, also in Nueva Vizcaya, when it hit head-on the FX van driven by Carpio in the opposite lane.

Due to the collision, the victims were trapped inside the vehicles and suffered injuries. They were taken to the Nueva Vizcaya Provincial Hospital for treatment. INQ

2 dead as truck flls on its side in Nueva Vizcaya