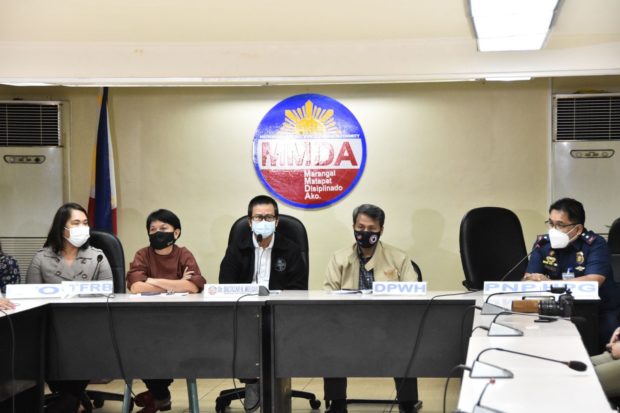 Metro Manila Development Authority (MMDA) Officer-in-Charge Director Baltazar Melgar conducts a briefing with other agencies on the use of sirens and blinkers, locally known as “wang-wang.” Photo from MMDA PIO

MANILA, Philippines — Officials and employees of the Metropolitan Manila Development Authority (MMDA) are not allowed to use sirens and blinkers, colloquially “wang-wang,” its officer-in-charge (OIC) said Wednesday.

MMDA Director Baltazar Melgar also said they pulled out their motorcycle escorts for government officials to support the drive against the illegal use of sirens and blinkers.

According to the MMDA OIC, a memorandum was issued for this particular directive.

“Sirens and blinkers should be attached to marked MMDA vehicles and used in the actual performance of the duties and functions of the agency. Violators among our ranks will face administrative charges,” Melgar said in a briefing.

In the same briefing, Philippine National Police-Highway Patrol Group (PNP-HPG) Service Legal Officer Bingsky Foncardas emphasized that under Presidential Decree 96 and the Republic 4136 or the Land Transportation and Traffic Code, “there are specific parameters that should be met to be able to use blinkers and sirens.”

“For authorized use of wang-wang and blinkers, the vehicle must be a marked government property which is used only during official functions or performance of duties such as emergency response and law enforcement,” Foncardas said.

He added that among government officials, only the President, Vice President, Senate President, Speaker of the House of Representatives, and Chief Justice of the Supreme Court are allowed to attach and use sirens, blinkers, and other similar devices on their cars.

The PNP recently intensified its crackdown on the unauthorized use of blinkers and emergency sirens.