In Ukraine’s Bakhmut, war is never far away | Inquirer News

In Ukraine’s Bakhmut, war is never far away 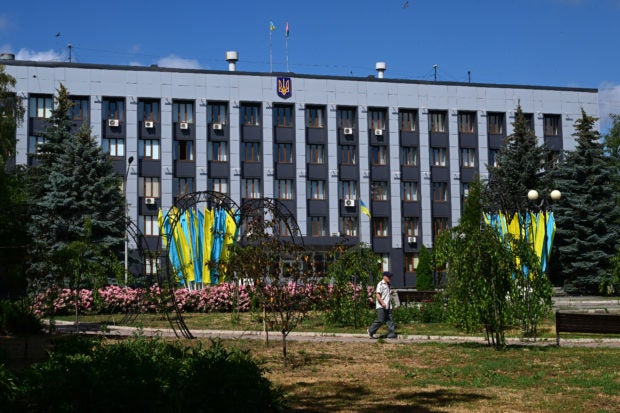 BAKHMUT, Ukraine — Lyubov Mozhayeva does not flinch at the sound of artillery fire in the distance as she comes to pick up a humanitarian food package in the centre of Ukraine’s eastern city of Bakhmut.

At first sight the city is quiet, with sunlight flooding the square in front of the town hall and locals calmly walking by.

But the boom of artillery fire and the wail of air raid sirens remain a stark reminder that the frontline of the war with Russia is not far away.

“You can’t run away from war and you never know where it will find you,” says Mozhayeva, a 60-year-old agronomist.

“You never get used to war, it’s dreadful and scary,” the dark-haired woman with blue eyes tells AFP.

Bakhmut lies southeast of Kramatorsk, a major city and an administrative centre of the Donbas, a region in east Ukraine that Russia seeks to take full control of.

Bakhmut and Kramatorsk are among the few remaining cities under Ukrainian control in the region.

With the frontline only a few kilometers away, Bakhmut has seen heavy shelling in recent weeks and Kyiv is expecting the fighting to intensify further.

Taking Bakhmut would give Russia control of a strategic highway and supply route, opening the road towards Kramatorsk.

After Russia invaded Ukraine on February 24, many of Bakhmut’s residents left the town, known as a leading producer of table salt and sparkling wine.

More than a third of the city’s population of 73,000 have fled, says Dmytro Podkuyidko, an official in charge of evacuations.

Behind a large municipal building, some 30 people are preparing to board two buses that will take them to Dnipro, a city in central Ukraine about a four-hour drive away.

But the evacuations are becoming more difficult as intensive shelling is making the roads more dangerous, according to one of the drivers, Dima.

“If it gets worse, I’ll end up leaving too,” Podkuyidko says.

At the town square, eight-year-old Sofia watches the departing buses with her stuffed toy tiger.

“I would like to evacuate too but my parents don’t want to. Everyone has left, there is only one kid my age left in the neighbourhood,” she says, fiddling with her pearl bracelet.

Her mother, a former real estate agent, confirms that they plan to stay: “We will not leave. We have a shelter.”

However, most families with children have left Bakhmut while many residents that remain are either elderly or have nowhere to go.

Others see no reason to leave.

“It’s sad, we were fine before and now it’s very unstable and I don’t even know who I should support: the Russians or the Ukrainians?” wonders Valery Pashchenko.

“Maybe the Russians will come and give me access to natural gas,” adds the former construction worker who uses a wheelchair after one of his legs was amputated.

“I am not afraid of anything or anyone, but I want it to stop. I didn’t think war was possible,” says the woman, who lived through the Nazi occupation of Bakhmut between 1941 and 1943.

The city also experienced an outbreak of heavy fighting after war broke out in 2014 between pro-Russian separatists and Ukraine’s government.

The separatists briefly took control of Bakhmut before it was recaptured by Ukrainian forces just over two months later.