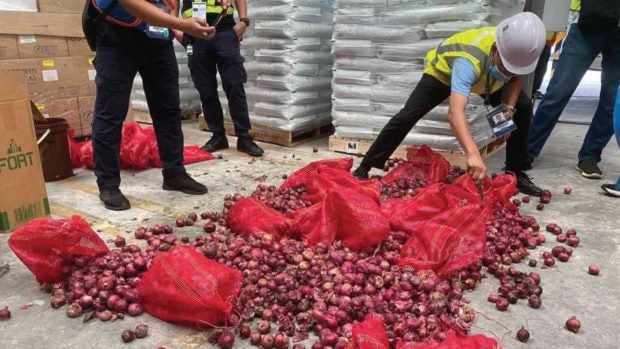 Personnel of the Bureau of Customs in the port of Subic inspect the container vans filled with alleged smuggled onions. (Photo courtesy of BOC-Subic Port)

MANILA, Philippines — Amid allegations that some Bureau of Customs (BOC) officials and personnel were among the protectors of smugglers of agricultural products, the agency on Monday said that its intensified fight against smuggling and corruption at the bureau had led to the dismissal, suspension, relief and reshuffling of erring officials and employees.

In a statement, the BOC said that three personnel were dismissed, seven were suspended, one was reprimanded, 27 were relieved and 249 employees were reshuffled in the first half of the year.

The BOC said these employees had been found to have engaged in “irregular activities.” The erring officials and personnel, however, were not identified.

From January to June, the bureau’s Intelligence Group and Enforcement Group have made 293 seizures of smuggled goods with an estimated value of P8.37 billion. The Top 3 seized commodities include counterfeit goods worth P5.23 billion; illegal drugs valued at P1.67 billion; and general merchandise worth P388.80 million.

It likewise prevented the entry of smuggled agricultural products valued at over P284 million.

The BOC said this was due to the “rigorous management prerogatives” of Customs Commissioner Rey Leonardo Guerrero, to counter corruption.

Guerrero and 21 other BOC officials were earlier identified in a report by the Senate committee of the whole as either alleged smugglers or protectors of agri-fishery that were “technically smuggled” into the country from 2019-2022.

The BOC officials denied the allegations.

The BOC said that out of the 58 letters of authority issued in the first six months, 44 caught smugglers. “Meanwhile, 78 alert orders were issued, 57 of which were positive for violation of pertinent customs laws, rules and regulations,” it added.

Alongside its antismuggling drive, the BOC fuel marked 9 billion liters of oil products during the first half, ensuring the collection of import duties and other taxes amounting to P118 billion.

Since the fuel marking program started in September 2019, the BOC injected chemical markers, which signified correct tax payments, into a cumulative 43.7 billion liters of diesel, gasoline, as well as kerosene.

To date, a total of P432.3 billion were collected by the BOC from tax-paid oil, thanks to fuel marking as mandated under the Tax Reform for Acceleration and Inclusion Law.

“The BOC and the Bureau of Internal Revenue (BIR) seized a total of 111,157.8 liters of diesel, 3,311 liters of kerosene, 18,839 liters of gasoline and seized two units of tank trucks carrying unmarked fuel with a total estimated value of P14.4 million. Tanks of 16 retail stations and four private companies where the BOC found these unmarked fuels were likewise sealed and recommended for filing of criminal cases,” the BOC said.

Since April of last year, the BOC and the BIR conducted random field and confirmatory testing to ensure that oil traders complied with fuel marking. When they find adulterated, diluted or unmarked petroleum, revenue officers can not only seize these products but also arrest unscrupulous traders.

Former Finance Secretary Carlos Dominguez III had said the huge revenues being collected from oil these days meant that smuggling was on the decline.

Costly fuel alongside customs reforms paved the way for the BOC to collect its highest-ever monthly take on June, amounting to P76.3 billion.

Without fuel marking, government estimates had shown that oil smuggling resulted in foregone tax revenues equivalent to over half of the annual duties and taxes being collected by BOC and the BIR, or about P27-44 billion yearly.