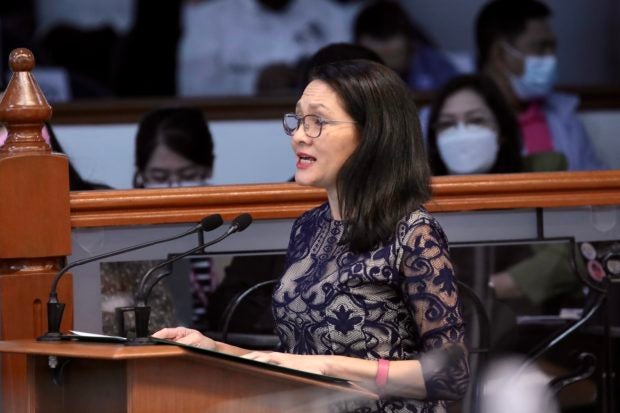 MANILA, Philippines — Senator Risa Hontiveros on Monday said she would cooperate with fellow senators and even “cross party lines” to push important laws such as the divorce bill.

This development came after Hontiveros recently refiled the Dissolution of Marriage Act and asked if she is open to cooperating with Senator Robin Padilla, who also filed his version of the divorce bill.

(We are ready to cooperate with any senators if we have the same advocacy for women and Filipino families.)

“As in the past six years, I am always able to cross party lines and unite with other senators to push important laws,” she further said.

Once the versions of the dissolution of marriage bill have been referred to the Senate Committee on Women, Children, Family Relations and Gender Equality, a hearing can be immediately held, Hontiveros said.

She also added that her fellow petitioners could include the records of hearings and committee report on the dissolution of marriage bill in the 18th Congress.

Hontiveros also emphasized that the divorce bill has been long-awaited by women who are being abused by their spouses.

(The dissolution of marriage bill has been long-awaited by our fellow countrymen, such as women who are bound to abusive and violent spouses. Should we wait for them to die or have their lives destroyed before we take action?)

“The dissolution of marriage bill will protect marriages, not destroy them. To be clear, it will not affect the sacrament of marriage, as observed by many religions. The law only affects marriage as a legal relationship creating obligations between spouses. It will have no impact on healthy marriages – it only serves to help those stuck in unions that have become irreparably toxic, broken, or abusive,” she argued.

The divorce bill, Hontiveros further argued, does not violate the 1987 Constitution as it allows Congress to pass laws about divorce or dissolution of marriage.

Hontiveros said there is a good chance that the dissolution of marriage bill will pass in the 19th Congress, noting that there is already a committee report in the 18th Congress about the bill that can be used.

(I hope this proposed measure will progress, one step at a time.) Xander Dave Ceballos, INQUIRER.net intern