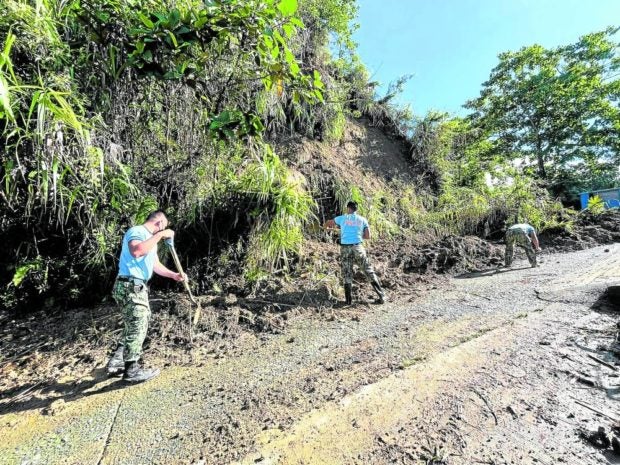 NO REST DAY | Sunday is not a rest day for police officers, fire department personnel and Department of Public Works and Highways workers in Ifugao province as road clearing and mud flushing operations continue in Banaue on the fourth day since the tourist town was hit by flash floods and mudslides. (Photo courtesy of the 2nd Ifugao Provincial Mobile Force Company of the Philippine National Police)

BAGUIO CITY, Benguet, Philippines — Flood-hit Banaue in Ifugao province remains on red alert on Sunday amid a looming weather disturbance, as officials deal with the aftermath of the massive flash floods and mudslides that hit the tourist town on July 7.

Authorities reported that at least 684 farmers in the upland town lost around P14.6 million in crops to the flash floods triggered by heavy rains induced by the southwest monsoon.

The Banaue municipal agriculture office reported on Sunday that the damage included 728 metric tons of a variety of agricultural produce planted in 198 hectares of farms.

Hard hit were some 120 ha of rice farms, which lost around 239 MT of palay valued at P4.543 million. Around 489 MT of high-value crops, mostly assorted vegetables planted in 79-ha farms, were also destroyed, with losses placed at P10.11 million, the report added.

The figure was expected to rise, as agriculture technicians were still assessing the damage in the agri-fishery sector while other villages have yet to submit their damage reports, it said.

Agriculture intervention and assistance to affected farmers and fishers included giving of rice, corn and assorted vegetable seeds; drugs for livestock and poultry; credit facility under the Survival and Recovery program of the Agricultural Credit Policy Council; available funds from the Philippine Crop Insurance Corp. to indemnify affected farmers; and the release of quick-release funds for the rehabilitation of affected areas.

On Sunday, some areas in Banaue remained littered with debris, even as personnel from the local police, fire department and the Department of Public Works and Highways continued with clearing operations in the affected areas.

Road clearing continued in the villages of Bissang, Tam-an and Poblacion while mud clearing and flushing were ongoing in affected residences and village halls in the town.

The Banaue municipal government has kept its emergency operation center open since the onslaught of the floods to respond to the needs of the affected residents and to prepare for any adverse effects that the new weather disturbance might bring.

As of 3 p.m. on Sunday, the low pressure area was estimated based on all available data at 405 kilometers east of Infanta, Quezon, and would bring rain showers and thunderstorms in Eastern Visayas, Surigao provinces, and the Bicol provinces of Catanduanes, Albay, Sorsogon and Masbate, according to the Philippine Atmospheric, Geophysical and Astronomical Services Administration (Pagasa).

Pagasa said the southwest monsoon would continue to affect many areas in the country, including the Cordillera.

The Cordillera may experience “cloudy to cloudy skies with isolated rain showers or thunderstorms” due to the southwest monsoon. The same Pagasa advisory added there could be “possible flash floods or landslides during severe thunderstorms.”

The July 7 flash floods and mudslides displaced some 500 families (around 1,500 individuals), damaged houses, blocked major roads, and caused power outages in Banaue. Electricity was restored in the town at 3 p.m. on Saturday.

As of July 9, the Banaue municipal disaster risk reduction and management office (MDRRMO) said the evacuees who stayed at the town’s gymnasium had returned home. Two families remained at the evacuation center in Barangay Poblacion.

The MDRRMO said the floods destroyed three houses and damaged some 813 others in eight affected villages. The numbers could increase as the office was still assessing the damage in 10 more barangays, the MDRRMO said.

The Department of Social Welfare and Development said it had initially distributed P339,375 worth of assistance, including food packs, to the affected residents. The agency also allotted P5 million as aid for those whose houses were damaged.

Leisure travel to the town remained suspended while clearing and cleaning operations were underway.

Banaue is home to two of the five Unesco-inscribed rice terraces in Ifugao—the Bangaan rice terraces and the Batad clusters, a popular tourist destination.

The municipal agriculture office said it was still assessing the extent of damages to the rice terraces, including those that are not included in the Unesco inscription.