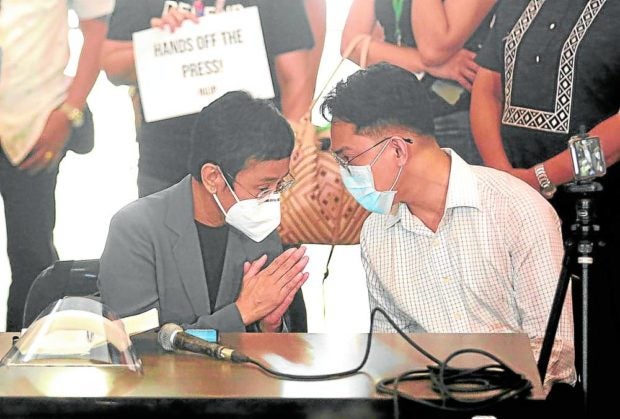 UNDER SIEGE Rappler chief executive officer Maria Ressa talks to her coaccused, former researcher-writer Reynaldo Santos Jr. Both were found guilty of the cyberlibel case filed against them at the Manila Regional Trial Court in 2020. —FILE PHOTO

There’s still no end in sight for the legal battles of Nobel laureate and Rappler chief executive Maria Ressa.

The Court of Appeals (CA) has upheld the guilty verdict handed down on the veteran journalist and a former Rappler researcher in connection with the cyberlibel case filed against them by property developer Wilfredo Keng.

The court’s Fourth Division not only denied their appeal but also increased by more than eight months the prison term meted out by the Manila Regional Trial Court (RTC) on Ressa and her coaccused, Reynaldo Santos Jr., on Jan. 15, 2020.

From the original maximum jail sentence of six years, the CA extended it to up to six years, eight months and 20 days.

“Wherefore, the appeal is denied. The decision … of the (RTC) Branch 46 Manila … finding accused-appellants … guilty beyond reasonable doubt … is affirmed with modification,” the CA said in the ruling dated July 7.

The cyberlibel case stemmed from an investigative report written by Santos in 2012, which claimed that then Chief Justice Renato Corona had used vehicles that Keng supposedly owned while he was facing impeachment proceedings in the Senate.

The article first came out on Rappler four months before the Cybercrime Prevention Act was signed into law in 2014. Keng filed the case in 2017.

Then President Rodrigo Duterte had accused Rappler of peddling lies against him after it published reports critical of his brutal war on drugs.

The CA ruling came out exactly a week after the Securities and Exchange Commission junked Rappler’s appeal to overturn its 2018 order that revoked the certificates of incorporation of the online news outlet and its holding company, Rappler Holdings Corp., for violating the rule prohibiting foreign ownership of mass media companies.

In a statement, Rappler confirmed it had received a copy of the CA ruling, calling it “unfortunate.”

It said Ressa—who won the 2021 Nobel Peace prize along with Russian journalist Dmitry Muratov—and Santos were consulting their lawyers and would challenge the ruling up to the Supreme Court.Ressa, who is also a US citizen, is fighting at least seven court cases, including the cyberlibel case where she has been allowed to post bail. —With a report from AFP